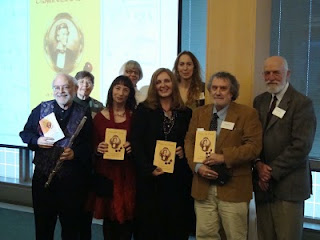 The last 2010 group reading from the Chopin with Cherries anthology took place at the November 2010 Chopin & Paderewski Conference at the Loyola University Chicago.

A lively and lovely group of poets gathered, including guests from Chicago who listened to visiting poets from around the country. George Bodmer, Sharon Chmielarz, Ben Humphrey, Gretchen Fletcher, Katrin Talbot, Maja Trochimczyk, Kathabela and Rick Wilson were there in person, sharing the poems by others.

Photos from the event may be seen at the Loyola University Chopin Album, and, to those who are friends of Kathabela, on her Facebook page, but a more substantial review still waits for its completion.

Each of the poets presented their work in a different way. Colorado-based Ben Humphrey decided to write out little introductions to his two poems and allowed me to reprint them, along with his poems. 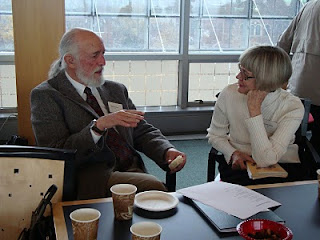 Introduction to An Invitation in D-flat Major

When I go to a reading, I like to know a little about the poet and how a poem came to be written, so I’ll trouble you with a few comments about my own work.

I live at 9,300 ft in the Rockies. I’m six miles from a paved road, so it’s quiet, and except when I’m listening to music, there is only the sound of the weather or “the sound of silence.”

I’m never annoyed by the weather. I have a dog; she always has her coat. So we go for walks whatever nature has to offer. Rain, snow, sleet and hail are a blessing; we need water for the trees and wild flowers.

I like to watch the snow fall and my dog loves to romp in snow drifts. One day in watching the swirling snow, the idea of the wind whistling a waltz can to mind and that lead to Chopin’s Minute Waltz.

An Invitation in D-flat Major

A crescendo of clattering slabs
Awakens me from my book
calls me – to take a Minute for the dance.

Introduction to: A Pastoral Piece in D-flat Major

It’s quiet where I live, and I enjoy the sound of the weather, rain, wind, sleet or hail. Poor Chopin, his vacation in Majorca was ruined by rain.

One morning, I was enjoying the sound of rain against my windows. I started to write a poem, cited the repetitious notes and then Chopin’s: The Raindrop Prelude, came to mind.

I reworked the poem and included as many musical terms as possible: motif, pianissimo, figures, grace notes, theme and cadence.
Finally it occurred to me, if the solo piano can take center stage, so can the weather.

A Pastoral Piece in D-flat Major

Gently beating on a window pane,
a rain storm’s motif
usually a patter, pianissimo
like repetitious figures of a Chopin prelude.

There are grace notes in raindrops,
a passing pastoral theme and a final
closed cadence. An atmospheric disturbance
has occupied center stage.

"In his somewhat wasted youth, G. BENNETT HUMPHREY received a MD and PhD from the University of Chicago, a disfiguring experience that turned his head into an egg. In his not so wasted youth, Ben studied piano, trumpet and later the banjo. Music was and still is an escape into solitude. Ben is pleased to have an opportunity to participate in this tribute to Chopin. He has been a guest on several occasions in Poland and wishes to express his gratitude for the hospitality that was extended to him by the Polish people. A retired Professor of Pediatric Oncology, Ben has been writing poetry since 2005. His poems have been published in American and British Journals and anthologies. He is an active member of Poetry West and serves on its Board of Directors."

Our Chopin adventure is coming to a close, with the festivities of the Chopin Year largely completed. In January 2011 at the Polish American Historical Association's Annual Meeting held in Boston, Mass., I will read a paper based, in part, on poetry and illustrations from Chopin with Cherries. The topic will be more sombre than other ones: the association of Chopin and his music with morbidity and death in popular culture and poetry. The vintage, turn-of-the-century postcards, like the one reproduced below will provide some of the most radical and kitchy illustrations of the fin-de-siecle spiritual malaise. 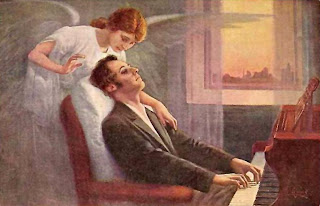 A report from this event will have to wait, as I have not even written about our fantastic group reading at the Chopin & Paderewski 2010 Conference at Loyola University Chicago back in mid-November 2010. In the backlog, we also have a guest blog by Ben Humphrey who wrote introductions to both of his poems presented at the conference.


The new year will bring new amusements and divertisements... I hope it will be healthy and happy for everyone. Among hundreds of wishes in my inbox this year (Christmas, Holiday, Birthday and New Year's Wishes), the following one in Serbian from Mira Mataric, a wonderful Serbian-American poet:

I do not know exactly what it means, but it certainly looks good! I also liked very much the anumated wishes from two Polish friends, "Happy New Year Everybody" from Krysia Kaszubowska and "Happy New Year" from Eva Matysek Mazur. It seems that paper cards have been replaced with lovely animated ones these days, just as books are slowly giving way to electronic "reads" on things like I-Pads, Kimbles and other electronic book readers. I like cleaning the frost flowers off the electronic window to see the village covered in snow outside - just like the villages and the frozen flowers of my (and Chopin's) Polish childhood. The flat fields covered in a white blanket, snowflakes swirling in moonlight, the allure of warmth inside the homes, lights shining from their windows into the cold darkness around... Feeling nostalgic for real winter yet? I must admit I like electronic snow much more than the real one, and that's why I live in Southern California... 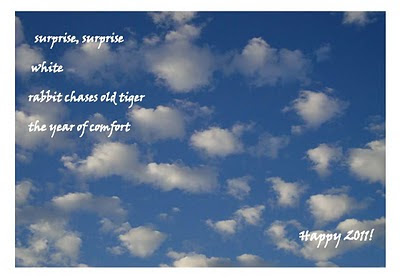 At a recent Haiku Party of the Southern California Haiku Study Group, chaired by Debbie Kolodji at the welcoming home of Wendy and Tom Garen, I read two new haiku celebrating the change of the year, from the tumultuous Year of the Tiger to the placid Year of the Rabbit. These are my first poems of the year, expressing the hope for a serene and content future, or, at least, some rest. The first one got accidentally printed on four lines. The white rabbit is the one from Monty Python, of course. Enjoy! Even without Chopin or cherries... Happy New Year! Dosiego Roku!
Posted by Maja Trochimczyk at 1:33 AM No comments: