The Trial of Dali by Andrew Kolo, Theater Fantazja from Sydney, Australia (Vol. 10, No. 4) 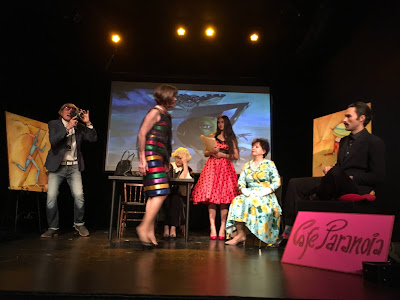 Trial scene from The Trial of Dali, with Andy Warhol, Isabelle, Judge, Maya, Gala and Dali

In June 2019, the Hollywood Fringe Festival presented a new play by Polish American artist-poet-playwright Andrew Kolo (Andrzej Kolodziej) performed by a troupe from Sydney, Australia - Teatr Fantazja -  and directed by its Artistic Director, Joanna Borkowska-Surucic. The play, its staging, and performances were superb in my opinion. I liked this spectacle so  much that I went to see it twice, and did not feel that I wasted my time.  The play is set in the 1950s in New York and Spain, where Dali went after losing all his money (partly due to the spending habits of his wife Gala, addicted to shopping). 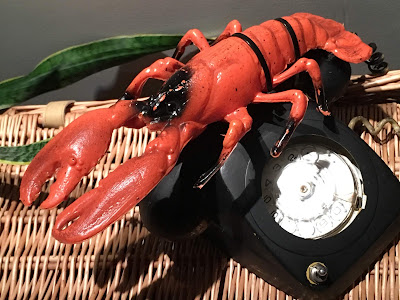 After a prologue with young mustacchioed Dali beautifully playing an electric violin (Sebastian Banasiak Adaji), the play starts with Dali and Gala packing in a New York hotel. The are constantly interrupted by farewell visitors and phone calls, answered by Dali on a "lobster phone" with "this is Dali, the one and only, the incomparable genius of the universe." Though funny, these lines are actually true of each one of us. We are all "incomparable geniuses" each "one and only" - except Dali had the courage to say it aloud.  In many brief conversations we learn of the eccentric genius's sense of humor and grandiose self-appreciation of his own talent, as well as meet some of his well-connected friends (Marilyn Monroe and Andy Warhol). 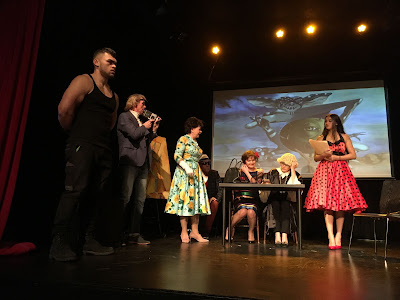 After this farewell to America, Dali and Gala settle in a small town in Spain, where he is surprised by a lawsuit brought against him by a former lover, Izabelle, bitter and jealous of his talent. She turns out to be a prosecutor who accuses the surrealist painter of indecency and of attacking morality. Strangely enough, his exaggerated sex drive, expressed through flirting with and seducing several women (well captured in hot and steamy scenes with Marilyn and Maya, a local paralegal) is not a target of the lawsuit. The focus is on his art, which is accused of being immoral and subversive to the state. In General Franco's fascist Spain, consequences could have been dire for the artist, who faced incarceration for may years - as his spiteful, vengeful accuser wished for. During the ridiculous trial, however, it turned out that the accuser-prosecutor herself was a failed painter who had lots of artistic problems and was accused of plagiarism herself, among other issues. Upon the discovery of this fact, the trial ended with the exoneration of the artist. 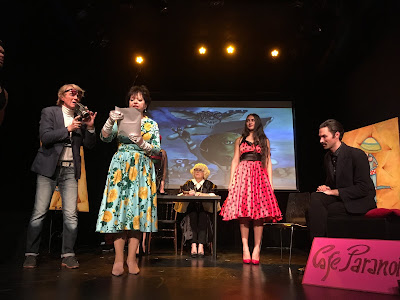 The witty play, with surprising twists of the plot and humorous dialogue, contains more serious reflections on the role of art and artist in society - is art just for sale? does art have a serious function of spiritual illumination? Is artist entitled to being supported by society? Kolo focuses on defending artistic freedom, the key to liberty and enlightenment.  Artists are like canaries in a coal mine; they notice and bring to light serious societal issues that need to be addressed at many levels.  The setting of the play in the dark times of fascist General Franco leading Spain towards World War II, with severe curtailing of personal freedoms, and intense prosecution of dissenters by the police state highlights the dangers we all live in. 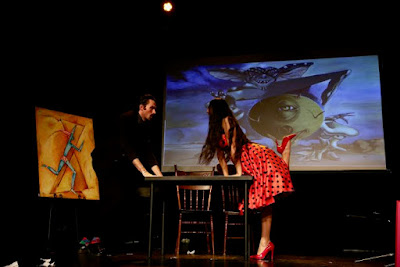 Our freedoms of speech and thought are now under attack by the PC thought police, a movement of those easily offended being offended by everything. They tend to  extend accusations of hate speech for words, texts or actions that are not approved by their own "Generals Francos."  In other words, we do live in Orwellian times of the Big Brother, double-speak, and the inversion of meaning, when men can identify as women and participate in women's sports, when murder of innocent babies is redefined as freedom of choice for women, when climate change hysteria (a global financial scam based on "carbon credits") is promoted by teens, while the air, water, soil, and food are polluted by toxic chemicals that are still "legal" to use... It felt liberating to laugh so much at the antics of Dali and his surreal entourage. It felt rewarding to see an outright defense of common sense, creativity, artistic and personal freedom, as well as the open condemnation of totalitarian state oppression and the violence of war. The latter was found in a notable scene animated with electronic music and flashing lights, while actors presented mimed imagery of war and violence, Dali himself under attack. 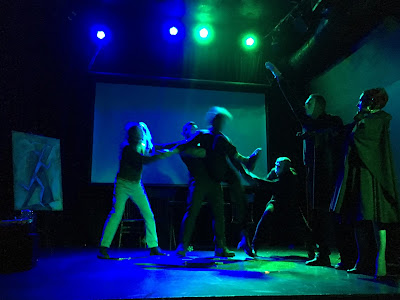 The cast consisted of the following actors who each contributed to its astounding success. Tall and "darkly handsome" (like a character from a Harlequin romance) James Domeyko played SALVADOR DALI with a frantic energy and true star's charisma. The YOUNG DALI (Sebastian Banasiak Adaji) was memorable with his fancy fake mustache and beautiful performance on electric violin. Jola Szewczyk was the genius painter's manipulative and older, yet elegant and savvy wife, GALA. Marta-Kiec Gubala played IZABELLE in a full revenge swing for her past abandonment by Dali. Shakira Lambell was a young, beautiful paralegal MAYA who decided to save Dali in the court trial and hoped to persuade him to paint her portrait, by seducing him with her youth (and the glowing beauty of her long, lustrous hair that she kept showing off). Boguslaw Szpilczak appeared as taciturn ANDY WARHOL, who filmed the trial, and actually filmed or photographed everything that was going on, with the camera as his appendage. Davey played the young, athletic and handsome court GUARD who had no friendly feelings for Dali; this character was the epitome of respect for law and order, no matter  how absurd. Also, young and extremely fit, the Guard was the focus of attention of both older women, Isabelle and Gala, who admired his vitality and the well defined musculature of his body - to a comedic effect. 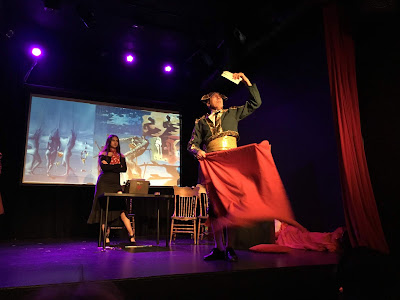 Maya watches the Torreadore in a brief, absurd dance. Photo by Maja Trochimczyk

Andrew Switakowski played PABLO PICASSO, who came surreptitiously to Spain (he was on the "hit" list by the Dictator Franco) to save Dali financially. Ela Chylewska, played the JUDGE in the trial and let justice prevail. Kamila Dudek or Yassica Switakowski changed into the beautiful and seductive MARILYN MONROE, flirting with Dali, and getting a portrait by Warhol out of the whole hullabaloo. Wieslaw Rogolinski was a SPY sent to Dali, dressed up as a bullfighter, he provided a humorous relief in a comedy.  There were many such "laugh out loud" moments in the play, thanks to the comedic talents of the cast, and the funny dialogue. 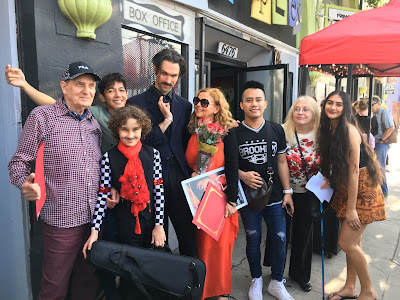 The music was mostly written by the star, James Domeyko, a charismatic actor and composer, with an almost infinite, frantic energy, intense stage presence, and a great musical talent. He kept surprising the other cast members and the audience with sudden turns and gestures, just as the whole play surprised and delighted the audience. Apparently, the original performances in Australia did not have so much music. The addition of many musical selections enriched the play and deepened its meaning and impact. (As a graduate of Chopin University of Music's "sound engineering" department, I am fully aware of the importance that music plays in any theatrical or film performance. Sounds touches our emotions directly and colors each scene, making it seem funny or poignant, or dangerous.) In addition to various recorded segments in Spanish flamenco or experimental electronic styles, the music appeared on the stage live: the play opened with a "young Dali" playing the violin (11-year old Sebastian Banasiak-Adaji). The stage was decorated with slide projections of Dali's paintings in the back and actual paintings by Andrew Kolo placed all around - for Dali to comment upon, improve, scratch excess paint from, and otherwise engage with. 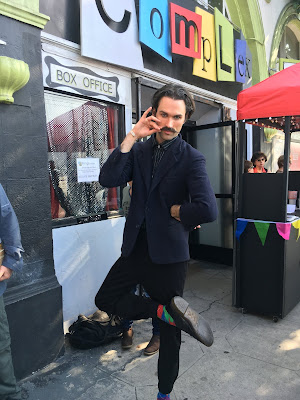 The play packaged its serious and important message, in defense of our First Amendment rights of free speech, free expression, and liberty for all, into a light-hearted, somewhat surreal, somewhat absurd guise of a comedy, well staged and presented by the experienced theatrical troupe from Australia. The actors, though Australian (and Polish), did not speak with their local accents, but rather enriched their characters with a variety of French-inflected (Picasso), Spanish-inflected (Dali), or plain-vanilla American (Warhol) accents, which were as entertaining as their antics and dialogue. All together - well done! 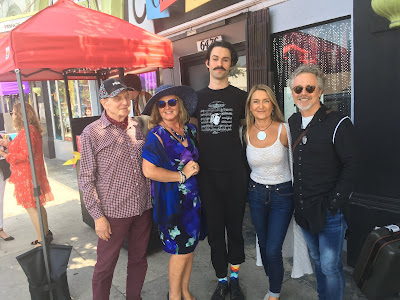 The Teatr Fantazja actors and crew were welcomed to  Los Angeles by the Helena Modjeska Art and Culture Club that after a matinee performance on June 15, 2019 brought them to the Polish Day at Hellada Gallery in Long Beach for a reception and a taste of Polish American culture.  We wish all actors and artists lots of success in the future, unmarred by severe curtailing of freedoms that are now under way worldwide, promoted by fake news media and governments bought out by billionaires with a nefarious agenda. As Dali won his trial, so we shall win, even after a prolonged and fierce spiritual battle for freedom and liberty for all!

Here are some quotations from earlier reviews of this play after its performances in Hollywood and Sydney, Australia. More information: http://www.teatrfantazja.org/the-trial-of-dali.html 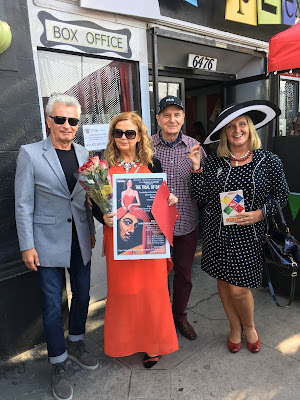 ———————————————————
"The Trial of Dali” is a spiritual homage to one of the greatest artists of our time. It’s is strange and other worldly, full of Dali’s humor and brilliance and love. It’s quite an achievement, to bring to life such a master and not to fall into obvious sycophany or sad mimicry. This play is honest and wacky, fascinating and odd, tender and true…Bravo!
~ Samantha Simmonds-Ronceros, Theater Critic, Hollywood
——————————————————————————————
"Director, Philippe Mora, and I both enjoyed the play, though it was an innovative and entertaining take on Dali."
~ Michael Blaha, Hollywood Movie Producer

—————————————————————————————
I attended The “Trial “at Zenith Theatre last night and must compliment you on steering a wonderful ship through a complicated play. Stagecraft, setting and overall abstract visualization were superb. My compliments to the surreal cast who brought their craftsmanship to the fore. I was the next morning that it all became homogenous. Thank you for the joy and appreciation of your directional skills.
~ Eli Beverly, Willounghby News, Sydney

—————————————————————————
"The Trial of Dali ticks some interesting boxes: new, definitely European sensibility at work in it though not of a classical kind, yet fresh, anarchic and American enough to offer something different to an Australian audience. The trial process itself is a variant of courtroom farce, with hysterical or seductive counsel, a biased judge, and a guard who seems to have strayed in from a Muscle Beach Robot video game. The performance I saw struck me, in some way, as still a work in progress. The moments of choreographed dance, with stark lighting variations and intense movement, were brilliant, completely appropriate to the surrealistic potentials of the play."
~ John Stevenson, Theatre Critic, Sydney 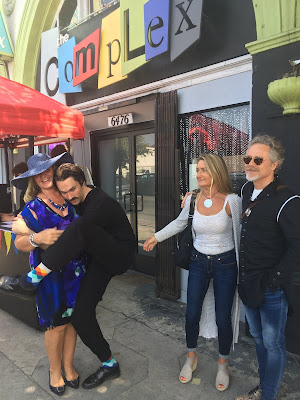 
Posted by Maja Trochimczyk at 5:05 PM No comments: