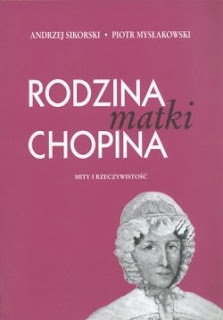 During my summer travel to Poland and two conferences on emigration, in Krakow and Gdansk, I met with my academic mentor and advisor, Prof. Zofia Helman of the University of Warsaw. After a light lunch at the faculty club in Kazimierzowski Palace, she promptly took me shopping to the Prus Bookstore across the Krakowskie Przedmiescie street.  My box of books on music has recently arrived with three biographical treasures about Chopin's family and circle of friends:

The three books, available only in Polish, are based on decades of intense archival studies by the authors, as well as reports from archival studies by other scholars. They include numerous transcripts and translations of archival documents and debunk myths about the origins and upbringing of Fryderyk Chopin, the scion of French and Polish families that could be described as "lower middle class" today.

The French heritage of Chopin's father, Nicolas, was questioned by patriotic mythmakers in the past. Ideas that he was a descendant of Polish soldiers who settled in France were circulated at the end of the 19th century. Piotr Myslakowski shows conclusively that this, widely abandoned myth, had no grounds in facts. He also reveals surprises in Chopin's lineage.  His forefather moved from a small Alpine village of smugglers living in abysmal poverty to lower, border area of France that used to be a part of the kingdom of Lotharingia and is now called Lorraine region. 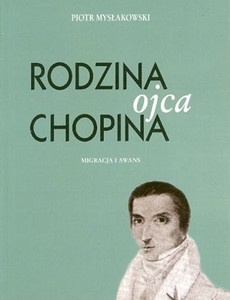 Apparently, the great-great-...-grandfather of Chopin left the home village and never looked back. From the underclass of smugglers the family rose to the lower class of peasants and artisans in the village.  One of the Lorraine great-great-grandfathers of Chopin became a wheel-maker and a scribe, rising to a position of note in the community. His descendant, Nicolas, left his family behind at the age of 17 when he moved to Poland where he became first a live-in tutor of sons of noble families, and then a school professor and principal. In one step after another, the family rose from murky and far-less-than-respectable background through hard work, education, and the pursuit of virtues and moral values. The subsequent generations of Chopins in the three locations did not stay in touch. When the artistocrat-of-the-spirit Chopin moved to Paris to hobnob with princesses, he did not look up his aunts and cousins in Lorraine. They were peasants, he was a friend of aristocrats. They had nothing in common. His ample correspondence with his family shows intense affection for members of his immediate familial circle. But he had no interest, nor need to reach out beyond.

Similarly, the family of his mother came from humble roots. Not as humble as the French family: her kin were among impoverished gentry who often disappeared from historical records, as they did not own land or estates. The two scholars traced their history through the records of baptisms - the Krzyzanowski family members could be Godfathers or Godmothers to various children where they lived. Another lively and surprising source of family history was found in the court records of the warring, lawless "less-than-noble" members of the Polish landed gentry, whose pastime, it seems, was to sue each other and, in an absence of an execution of the sentence, raid their enemies and attack, injure or even kill them, while destroying or stealing their possessions. As an employee of such a brigand-noble, one of Justyna Krzyzanowska's forebearers is noted in several court records of this kind. Fascinating reading!

I have not yet started reading the "family circle" part of the three books, but I believe that it would be to the benefit of English-speaking Chopin lovers and scholars to have access to their English translations.  The books are written in a very engaging and engrossing fashion. I read the story about Chopin's father as if it were a murder mystery - and, in fact, a mystery solved it is. The sooner we have English versions, the better for all future scholars of Chopin's life and music.