Chopin's Pianinos and the Discovery of Their Secrets, or Fadini's Workshop (Vol. 5, No. 10) 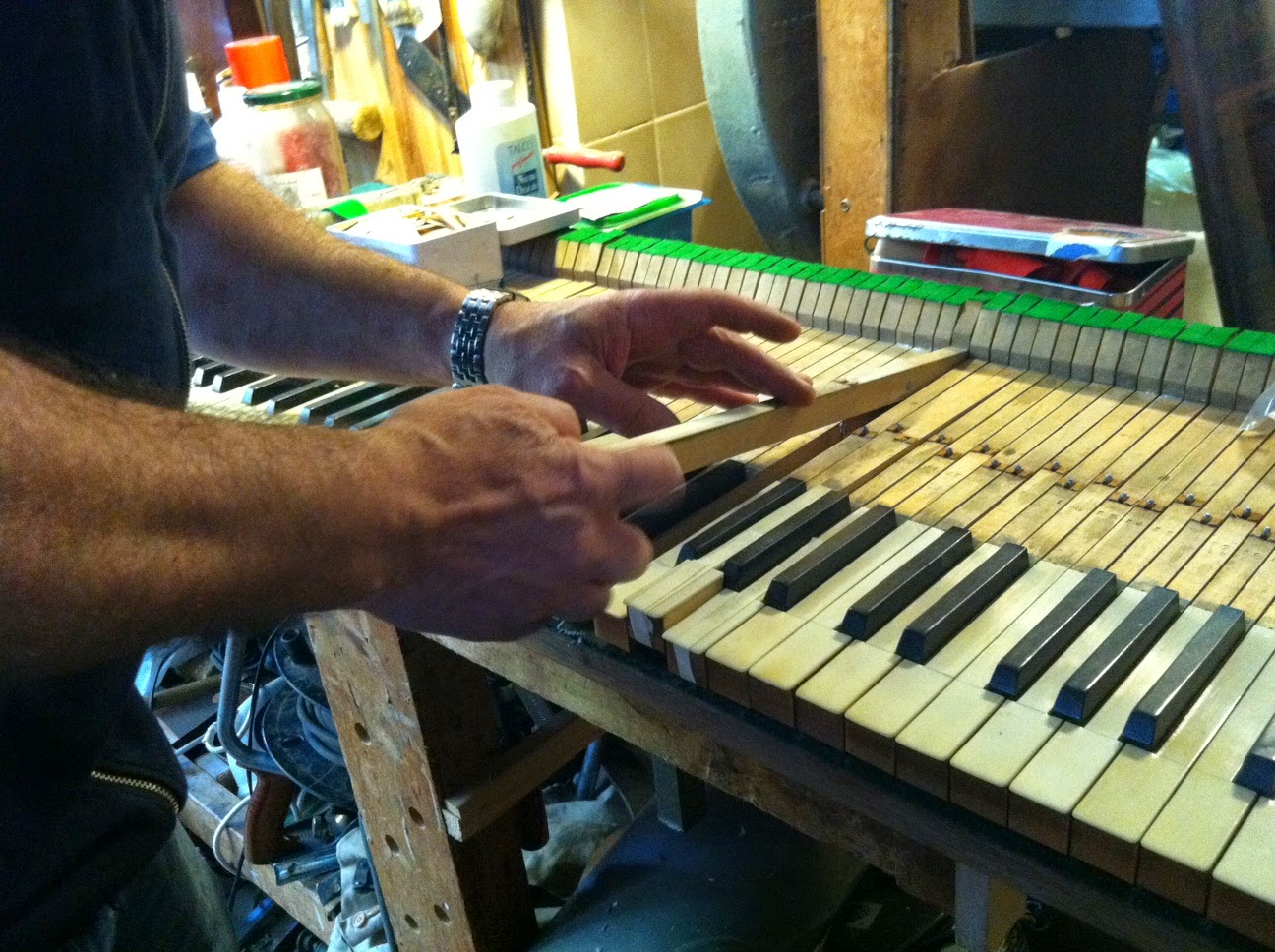 Fadini works on Keys of a Playel Pianino No. 7037.

On May 3, 2014, after the end of the Szymanowska Conference in Paris, I took a trip outside of Paris to the workshop of harpsichord maker and collector of Pleyel pianos, Oliver Fadini. I went with the renowned Chopin specialist, Prof. Halina Goldberg of Indiana University.  Our tour was arranged by Fadini's friend, music journalist at Radio France, Gilles Bencimon, a fervent lover of Chopin's music and the sound of historical pianos and pianinos. 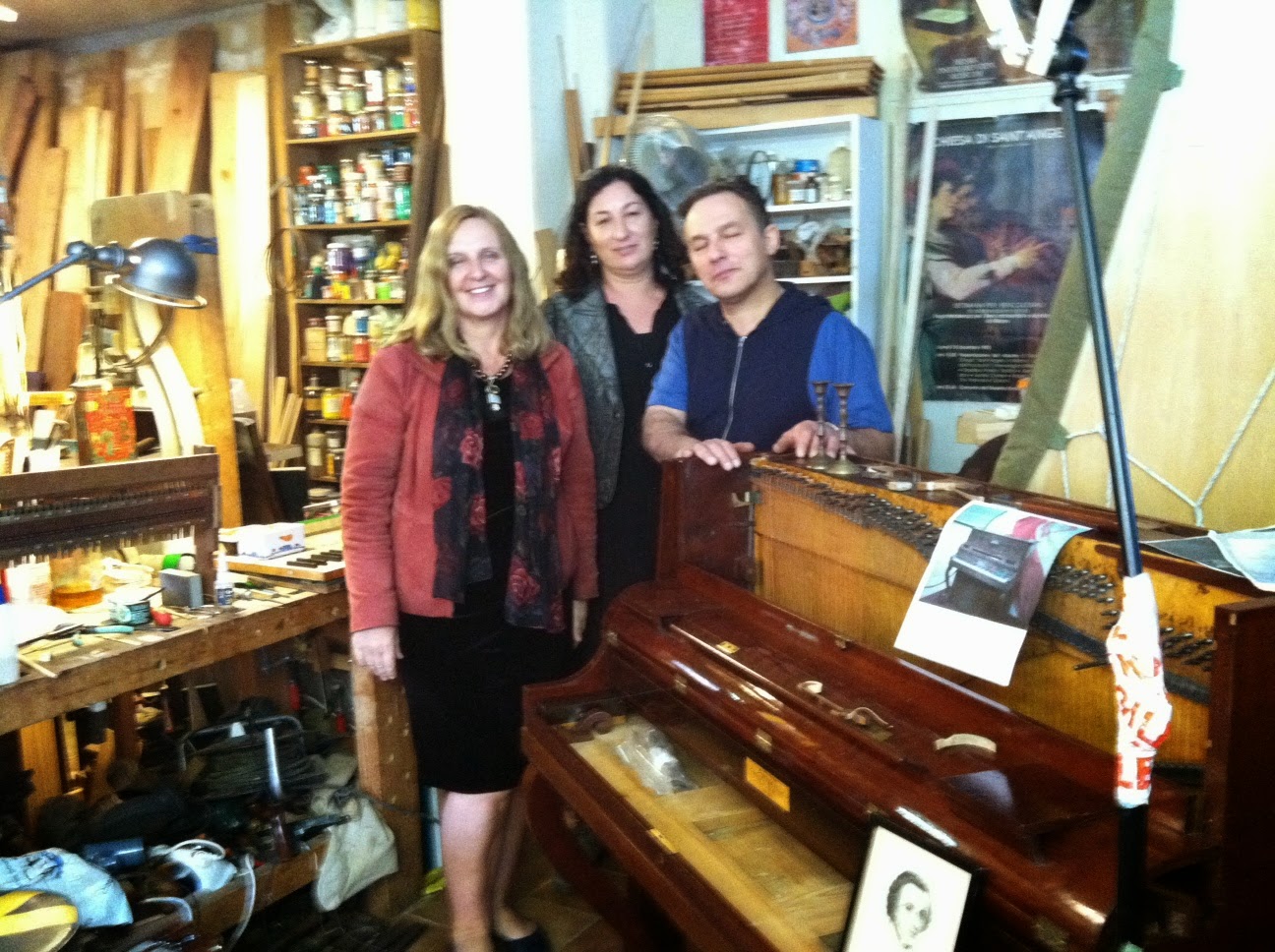 We arrived in time to see our host work on restoring a Playel Pianino no. 7037  from 1837; very close to the number of Chopin's pianino from 1830s.

Rabbit fur felt is wrapped in layers on the hammer.

Mr. Fadini took the pianino apart and was restoring all the hammers that had old leather on the heads, and had to be refurbished with rabbit-fur felt.  We looked around at his magnificent collection of Pleyel pianos and pianinos, including square pianos, and an example of every model that Playel made until mid 1840s. 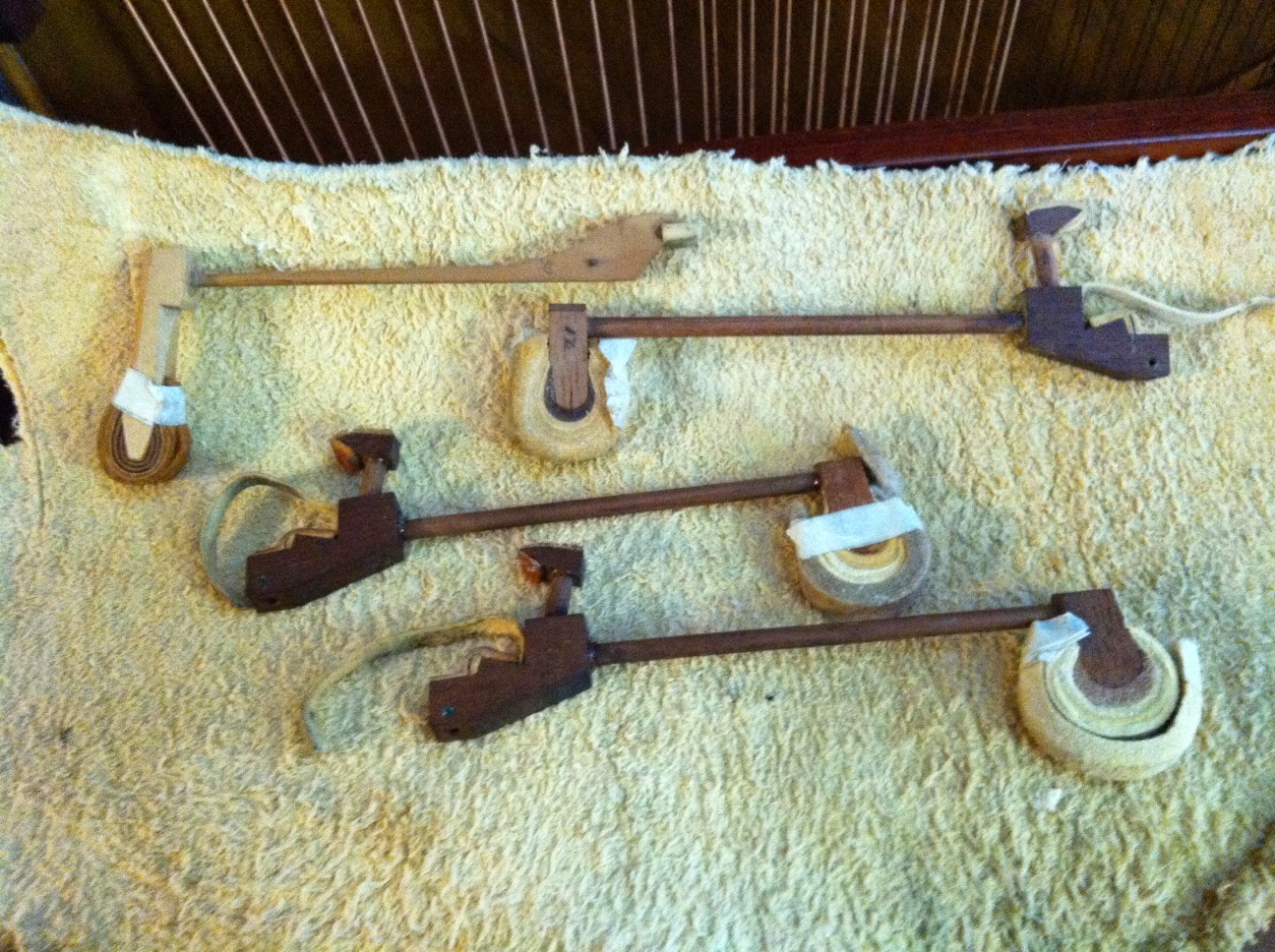 A sample of hammers with leather, rabbit felt (grey) and lamb felt (white).

Apparently, if you cover the heads of the hammers with leather, it will dry and shrivel after a year or two, and will have to be entirely replaced, or else it will cause the piano to sound like a honky-tonk instrument from a saloon in an old Western.  However, if the heads of the hammers are covered with stripes of rabbit-fur felt and leather, the sounds is different, softer, rounder, more distant and mysterious, but also more resonant.  Interestingly, the harder felt from sheep's wool does not create the same effect; and the sounds remains harsh, unforgiving. 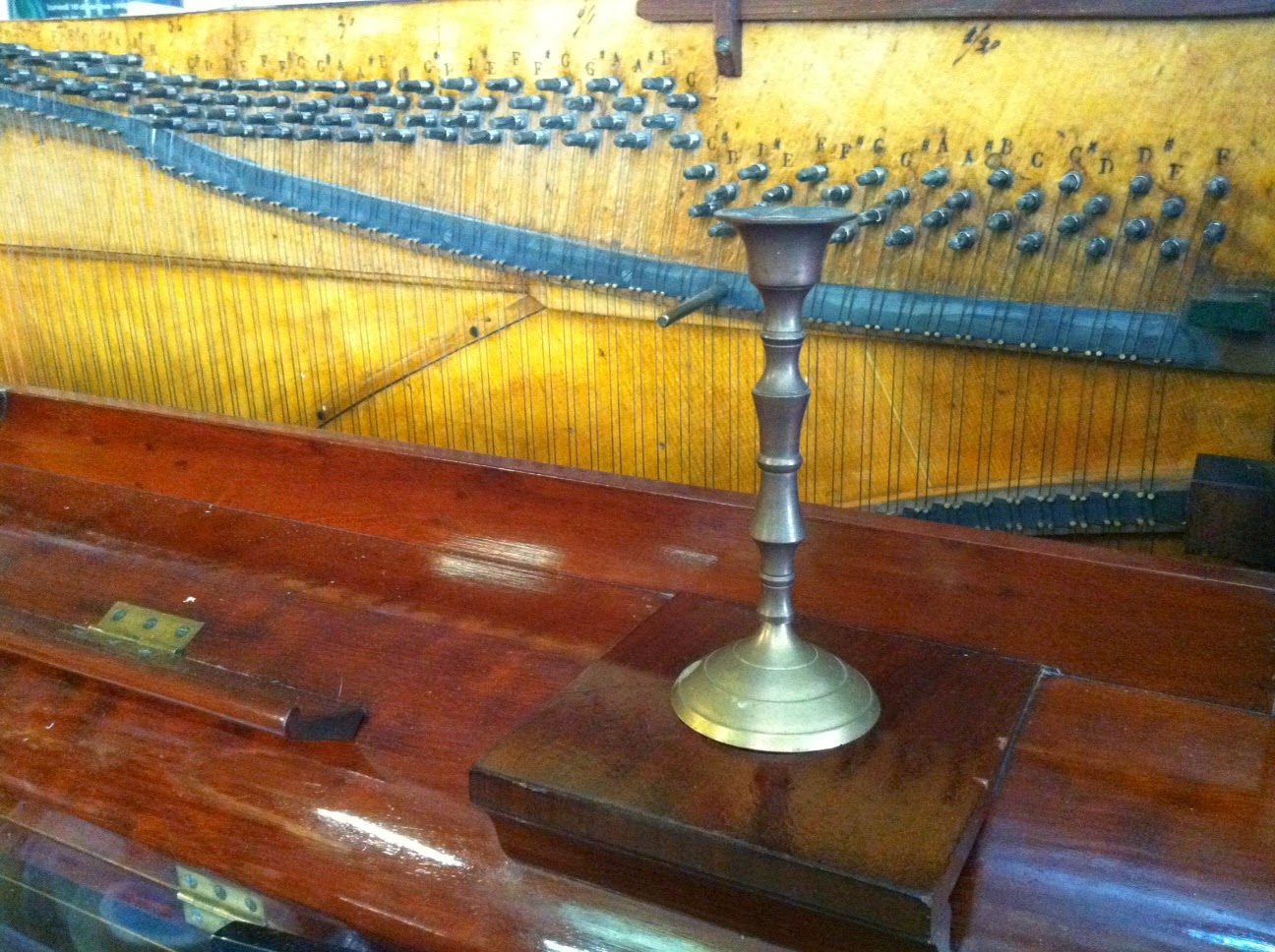 The pianino had a built in square stand for the candle  holder.

In order to show us this difference of tone, Mr. Fadini used the hammer heads to strike the exposed strings of the pianino. Indeed, the leather-covered hammer hit the strings very hard, with a pointed, sharp accent at the beginning, and the confused, sharply dissonant resonance afterwards. In contrast, the felt-covered hammer touched the string more delicately, and did not have that sharp, twang attack at the beginning of the sound that was richer, rounder and more sonorous. 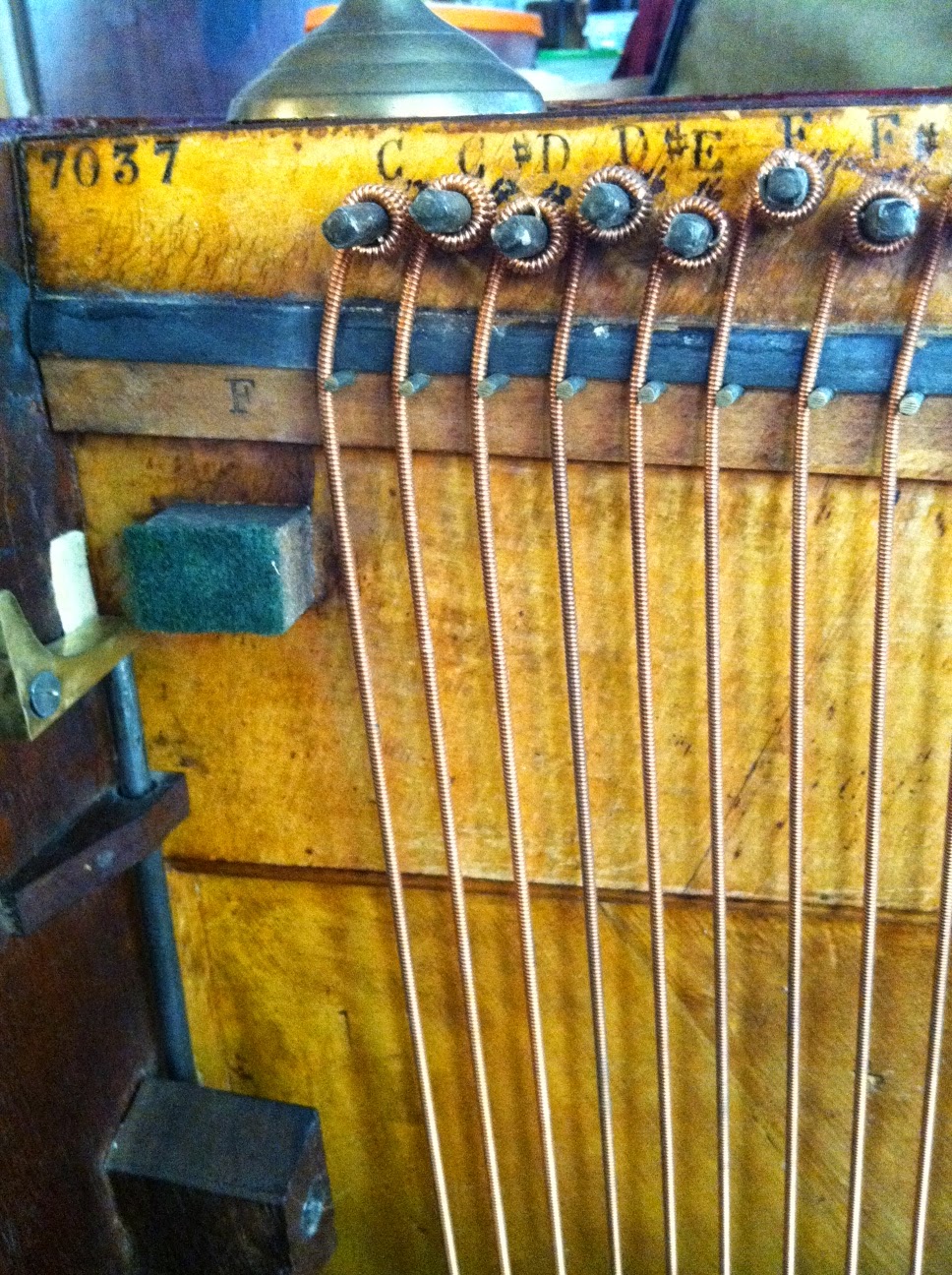 The different hammers require a different performance technique and Halina Goldberg had a chance of trying out the historical pianino, playing through fragments of various preludes and etudes, from old editions that Mr. Fadini also collects.  The pianino's location in the studio was also interesting, as it was not set flat against the wall, but turned with the resonance holes, covered for modesty with blue fabric, towards the listeners. While the instrument is not very pretty seen from this side, its "underbelly" as it were, the sonorities are more present and especially the high registers sound crystal clear. 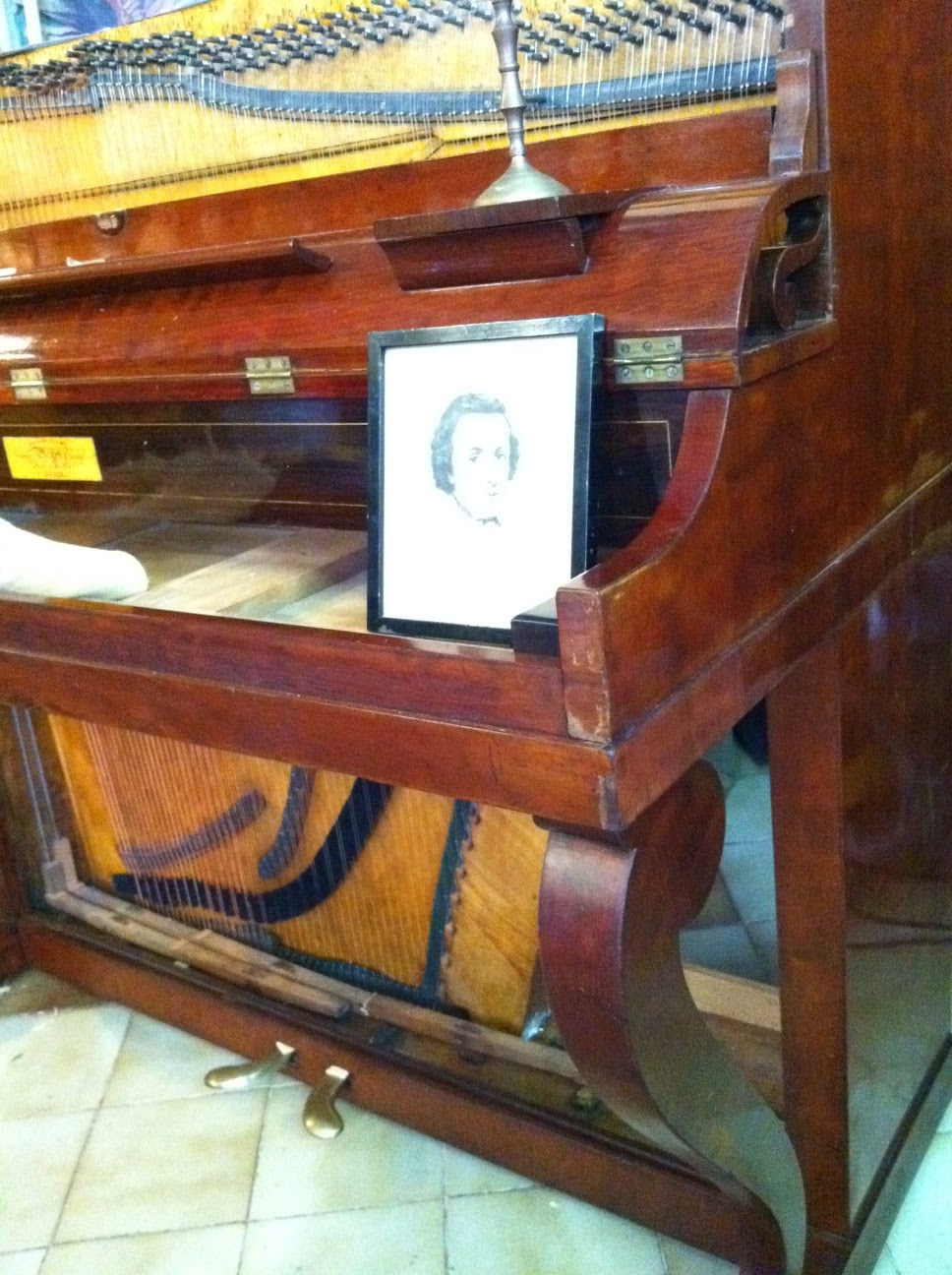 As it turned out, the pianist's "touch" has to be entirely opposed to the traditional way of approaching the keyboard on a grand piano, with heavy keys and mechanism.  The touch on the historical Pleyel pianino is lighter and never forceful; this is the most apparent in loud passages, played forte or fortissimo.  The heavy handed forte of the grand piano is entirely unsuitable for the historical Pleyel pianino, with delicate mechanism and soft, felt hammers.  The pianist has to forget what she or he knows and learn anew. 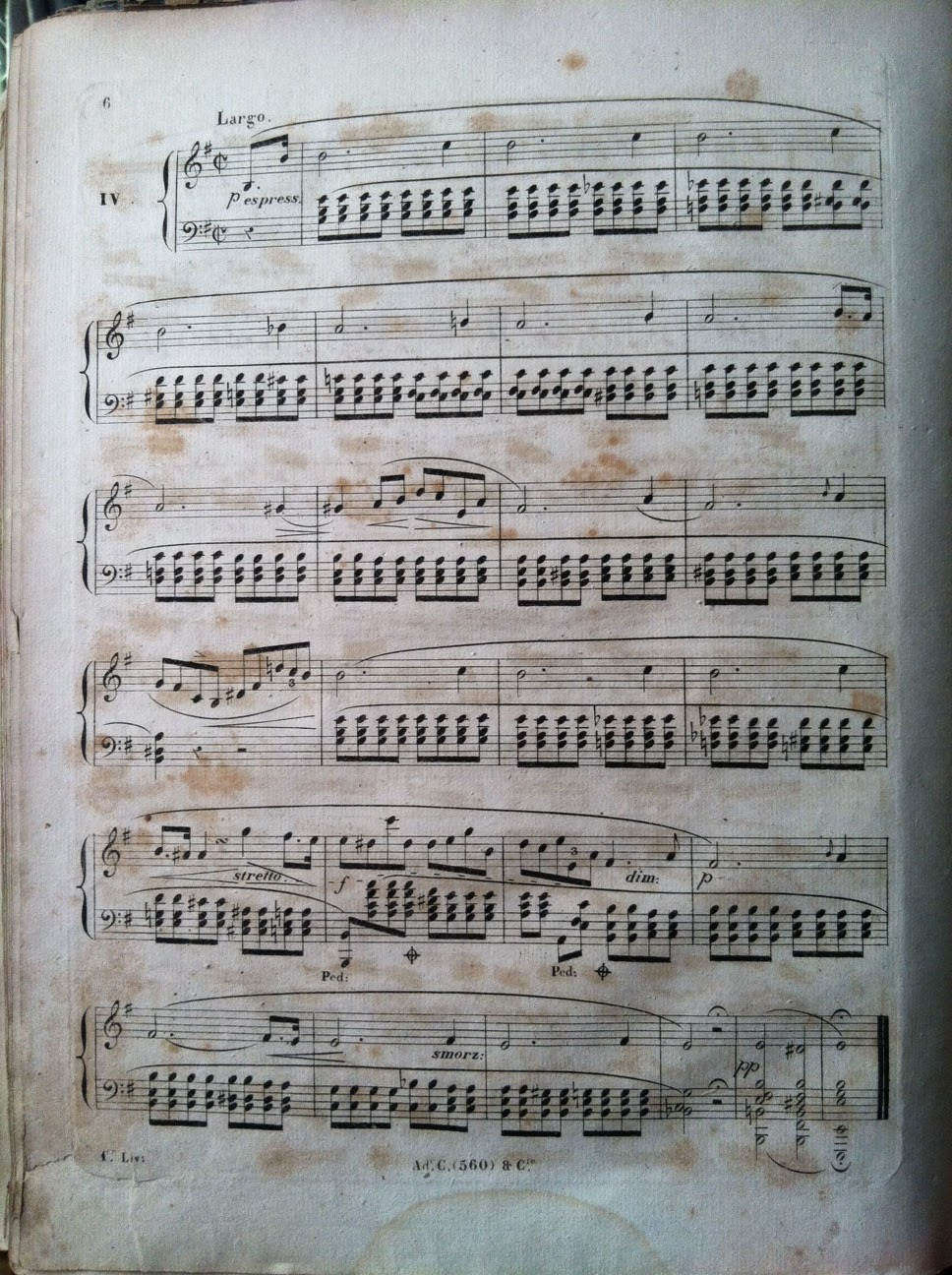 Another difference is in the use of the pedal; practically non-existent on the historical pianinos, where the legato is created on the keyboard, not by pedal, and the high register maintains the pearly quality of sounds that were often commented upon in Chopin's own performances. Chopin's pedal markings, different from one edition to the next, may also be intended for diverse types of instruments - he would use varying amount  of pedal on instruments that are naturally more resonant and more attenuated.  Sandra Rosenblum currently researches the issue of Chopin's changing pedalization and may take the structure and sonority of Pleyel pianinos into account.

Indeed, Chopin's students and listeners, have left testimonies about this delicate, nuanced way of playing, that had a full dynamic scale, but also a shimmering inner life of shifting dynamic levels, crescendos and decrescendos. They also talked about his abhorrence of loud, forced chords that sounded to him like the "barking of a dog" - in the words of his student Karol Mikuli, quoted by Aleksander Michalowski in 1932. 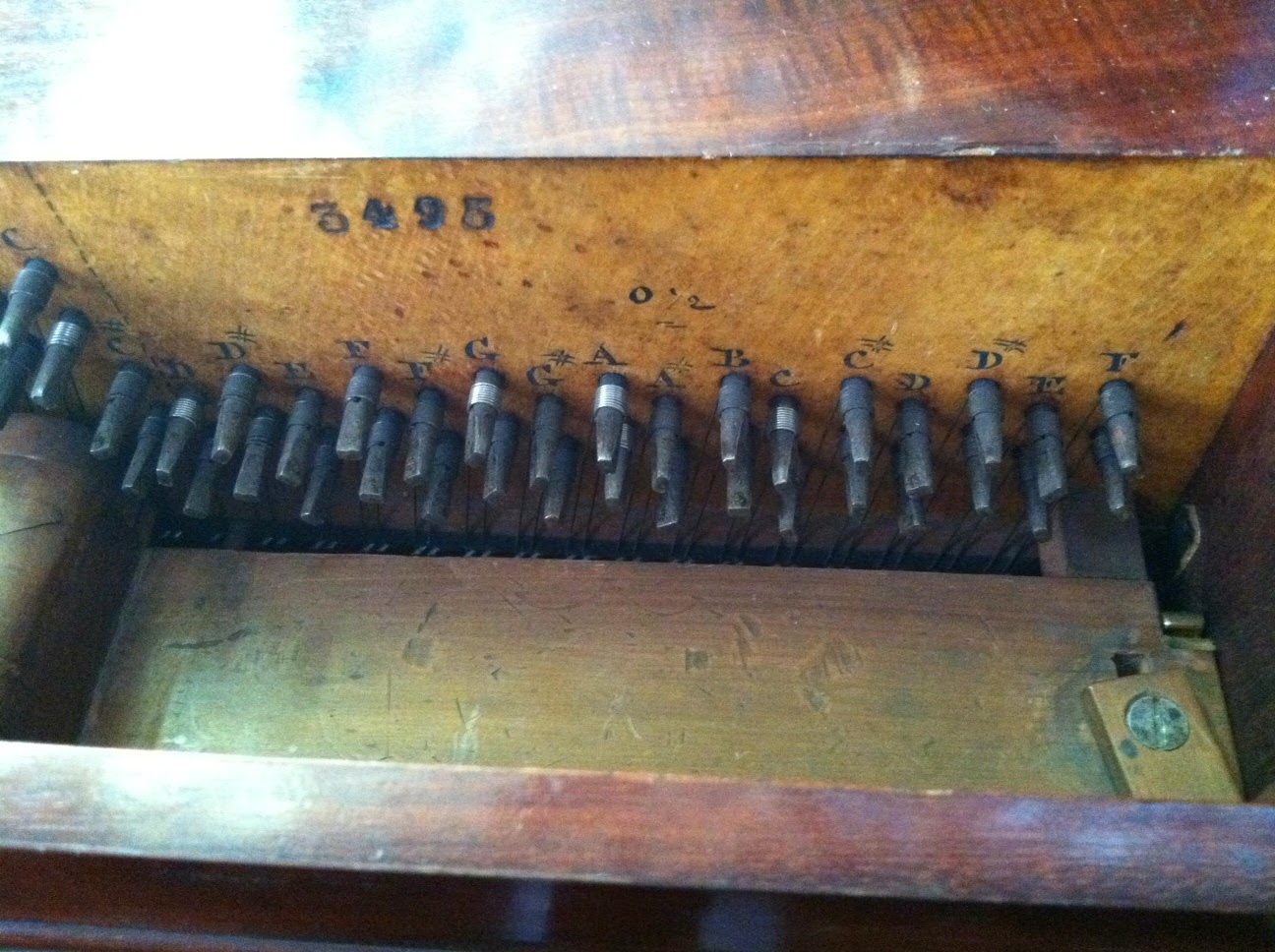 Mr. Fadini found a confirmation for his theories in a period study about the sound of pianos and the importance of the proper hammers and proper pianist's touch on the sonorities created by the instrument. The book, written by Nannette Streicher nee Stein in Vienna, and entitled "Quelques observations sur la facon de jouer, d'accorder, et d'etretenir les fortepiano" (transl. by Hubert Bedard and Felia Bastet, Heugel et cie., 1982) contains a lot of fascinating insights into the sonorous world of instruments used in Chopin's lifetime.  Another highly recommended book is "Art classique et moderne du piano" published in Paris in 1842 by A. Marmontel (https://archive.org/stream/artclassiqueetmo00marm#page/n4/mode/1up) 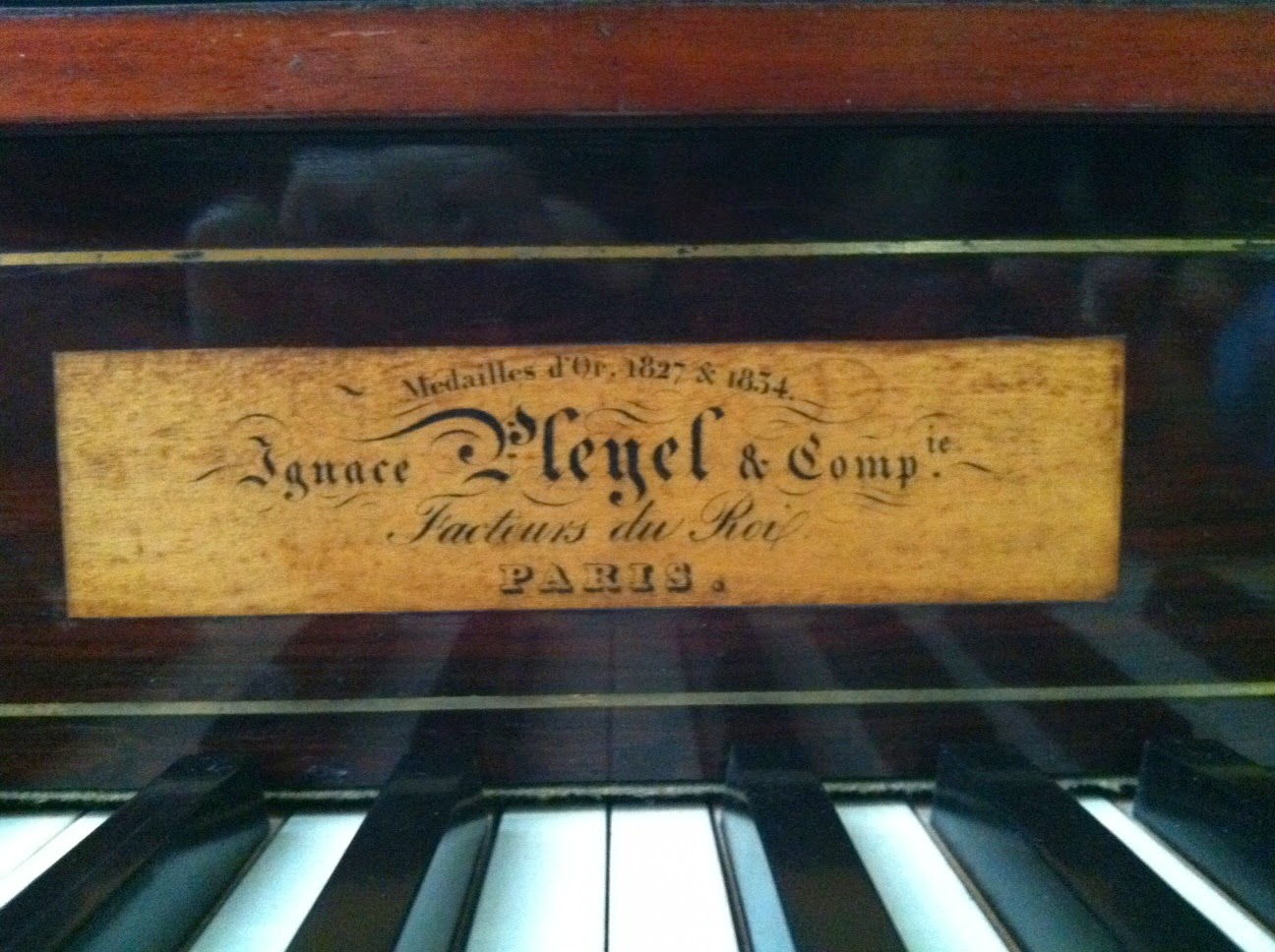 Streicher writes about the "veiled, mysterious" sonorities in mid-range and of the "pearly" - distinct, clear and almost translucent - scales in the high register. She insists on the proper articulation and "touch" that is never forceful but always very precise. The sounds described so vividly by the author, a Chopin contemporary, may be heard on a recording by Fadini's wife, a Japanese-born pianist. The recording is not yet commercially available, but it will contain enough material to convince its listeners about the veracity of Fadini's theories. 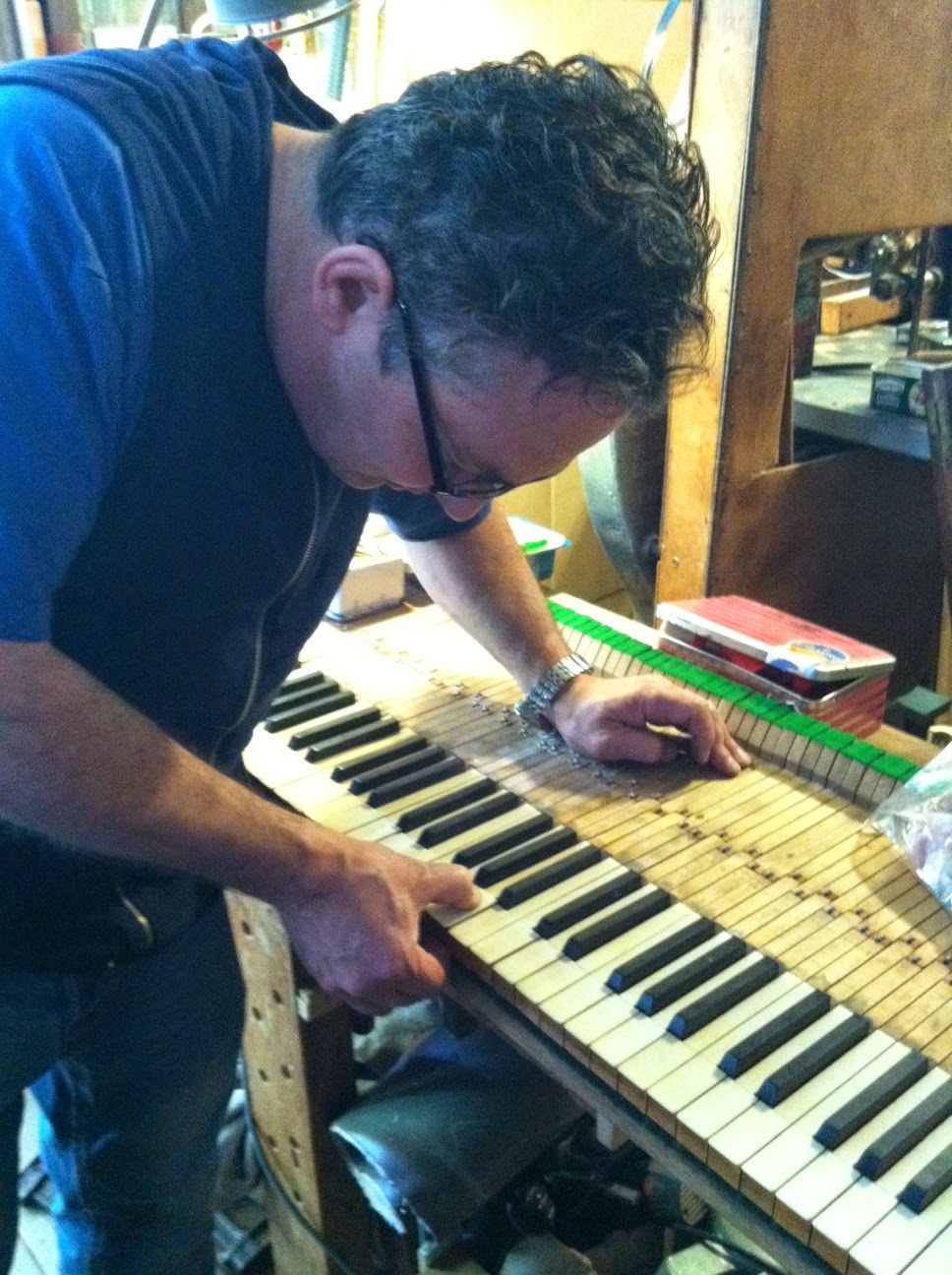 While few piano-makers subscribe to Fadini's hypotheses at this time, he continues to restore pianinos and show them in concerts and exhibits. Most recently, he finished the restoration of a pianino for Mallorca; where it was shown and played at a special event. Gilles Bencimon assisted his friend in the time-consuming restoration tasks, that include making the artisan's own glue, paints, and felt. 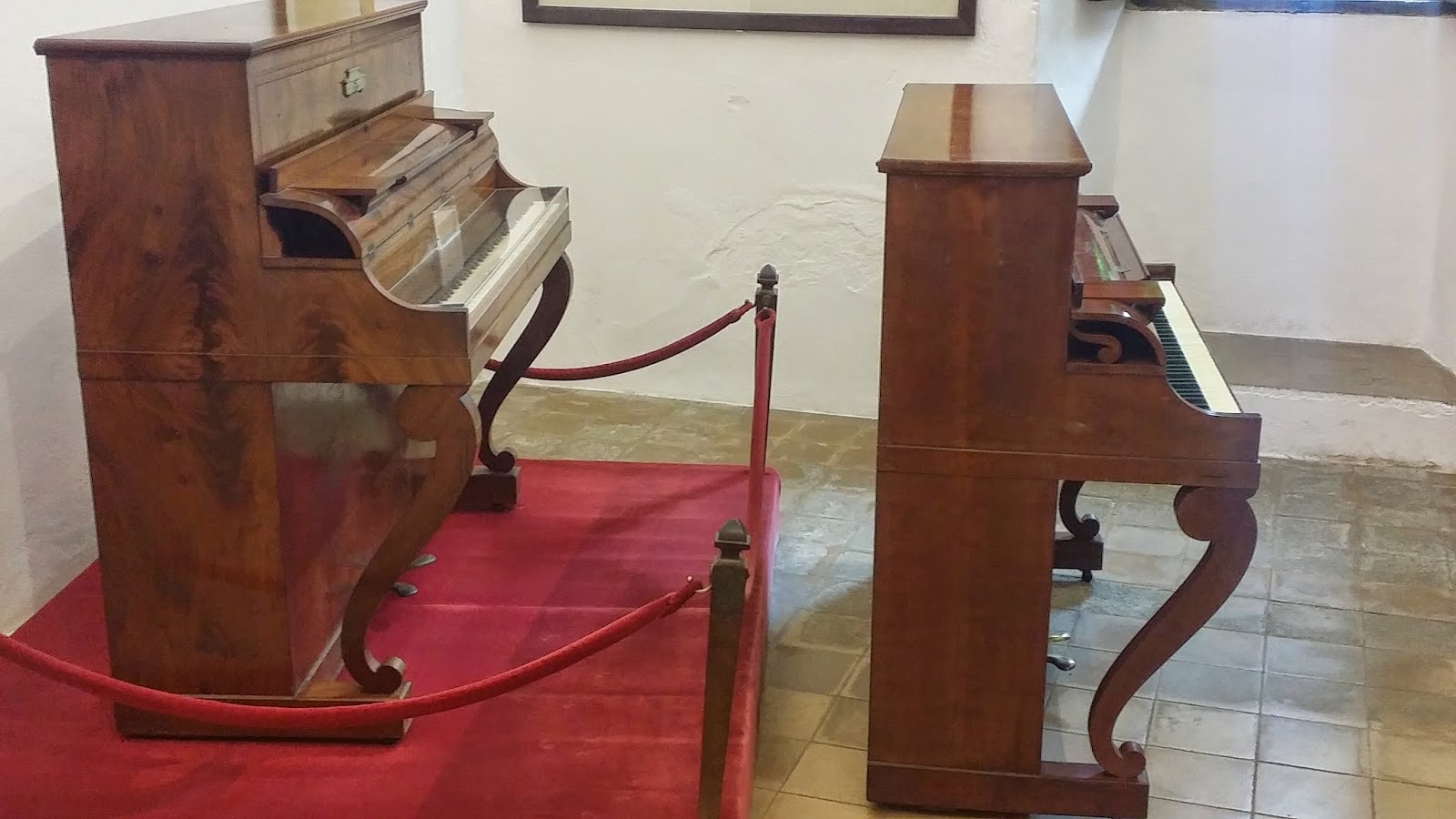 The restored Pleyel Pianino No. 7037 is the same model and was made in the same year as Playel Pianino 6668 that is preserved in the museum in Mallorca. The restoration project is a subject of a book that is being prepared by Fadini and Bencimon. That Mallorca Pianino is important: Chopin composed his Preludes Op. 28 on this very instrument! Wouldn't you want to know how it sounds like?

As it turns out, you can. Oliver Fadini's wife, Japanese pianist Aya Okuyama (http://www.ayaokuyama.com) recorded them playing on the Pianino 7037, identical to the one that Chopin composed the preludes on in 1839. More information may be found on http://www.nomadmusic.fr/fr/webzine . 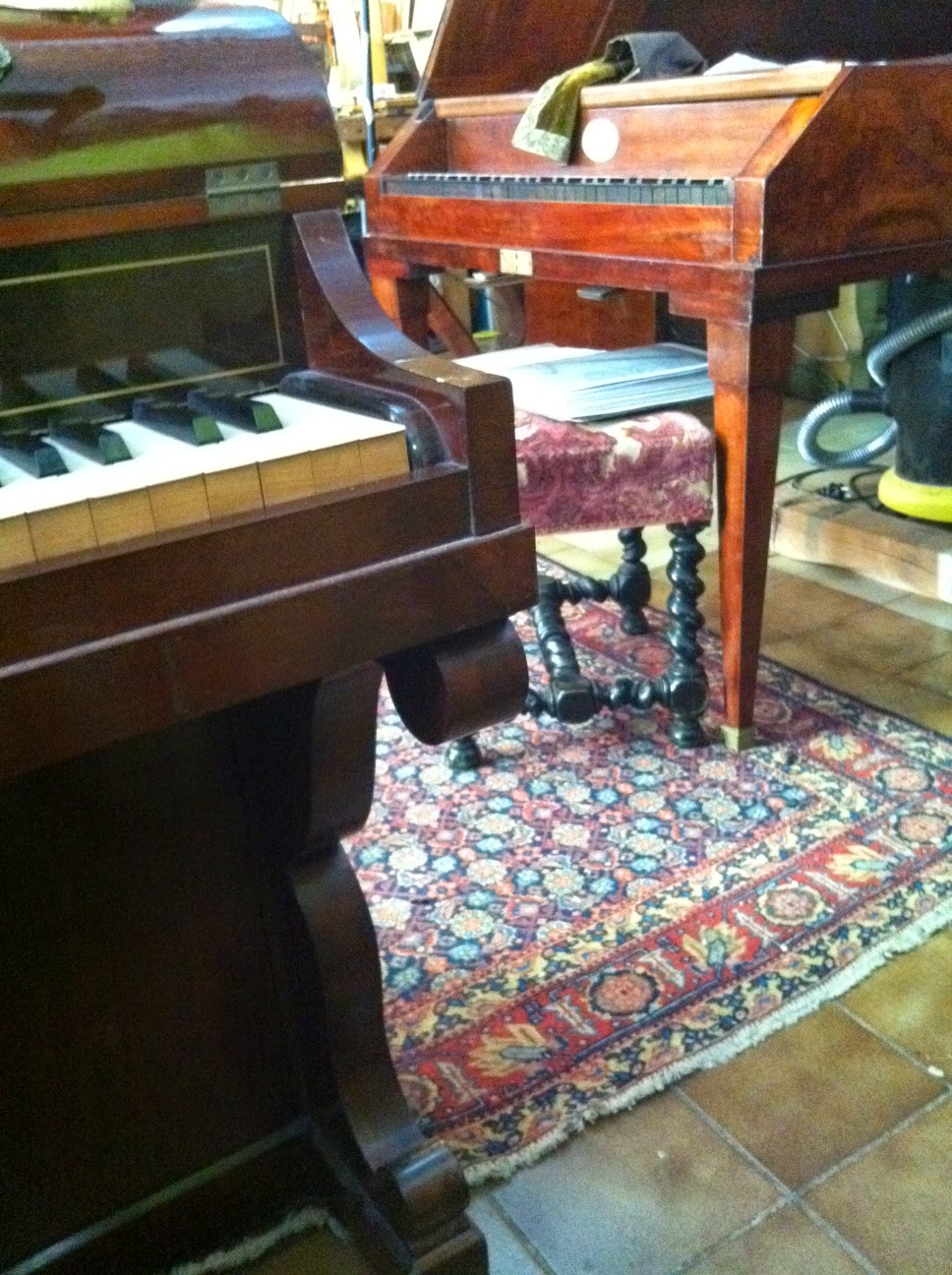 
You can read more and see the photographs of various historical pianos on Fadini's blog, called Pianino Pleyel, pianinopleyel.blogspot.com.  It is certainly a fascinating topic, worth further explorations. If more comparisons are made between fully restored old pianinos with rabbit-fur-felt hammers, and modern grand pianos, and if the various editions of Chopin's preludes, waltzes, mazurkas and etudes are played on these diverse instruments, we will be able to expand the scope of knowledge about Chopin and his musical world. I do not know if the argument will be resolved in this discussion; people like holding on to their ideas for their dear life. On the basis of what I heard in Fadini's studio, though, I can say that he certainly won one convert that day.  If I ever want to play Chopin well, I'll buy a Pleyel pianino. 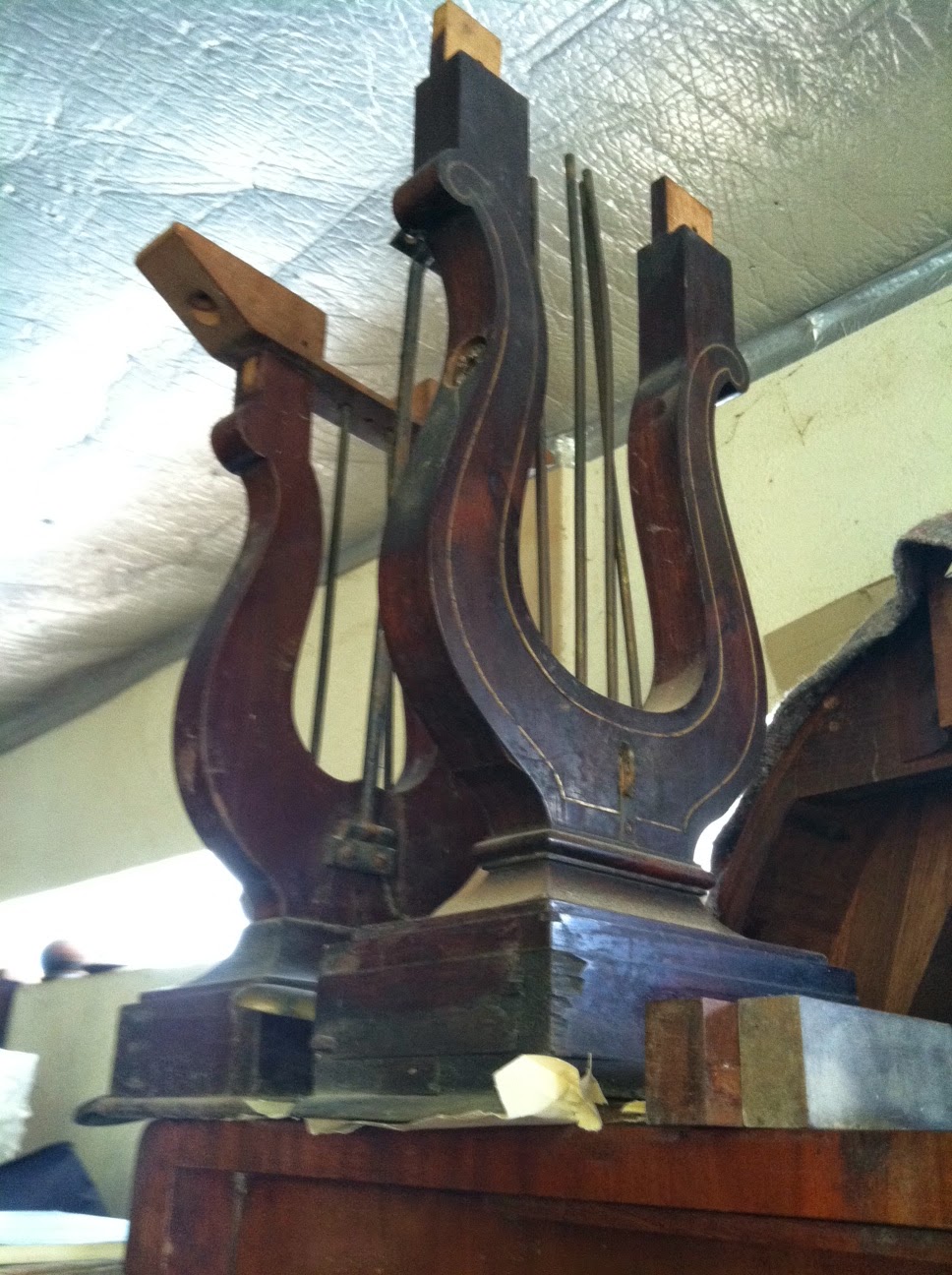 In the meantime, I admired the collection of antique piano in a cramped studio, where piano legs may be found in the ceiling, and one beautiful instrument stands on its side, while another is piled up on the third.  We saw a beautiful old harpsichord with "inverted" white and black keys, and a beautiful Viennese Graf piano. 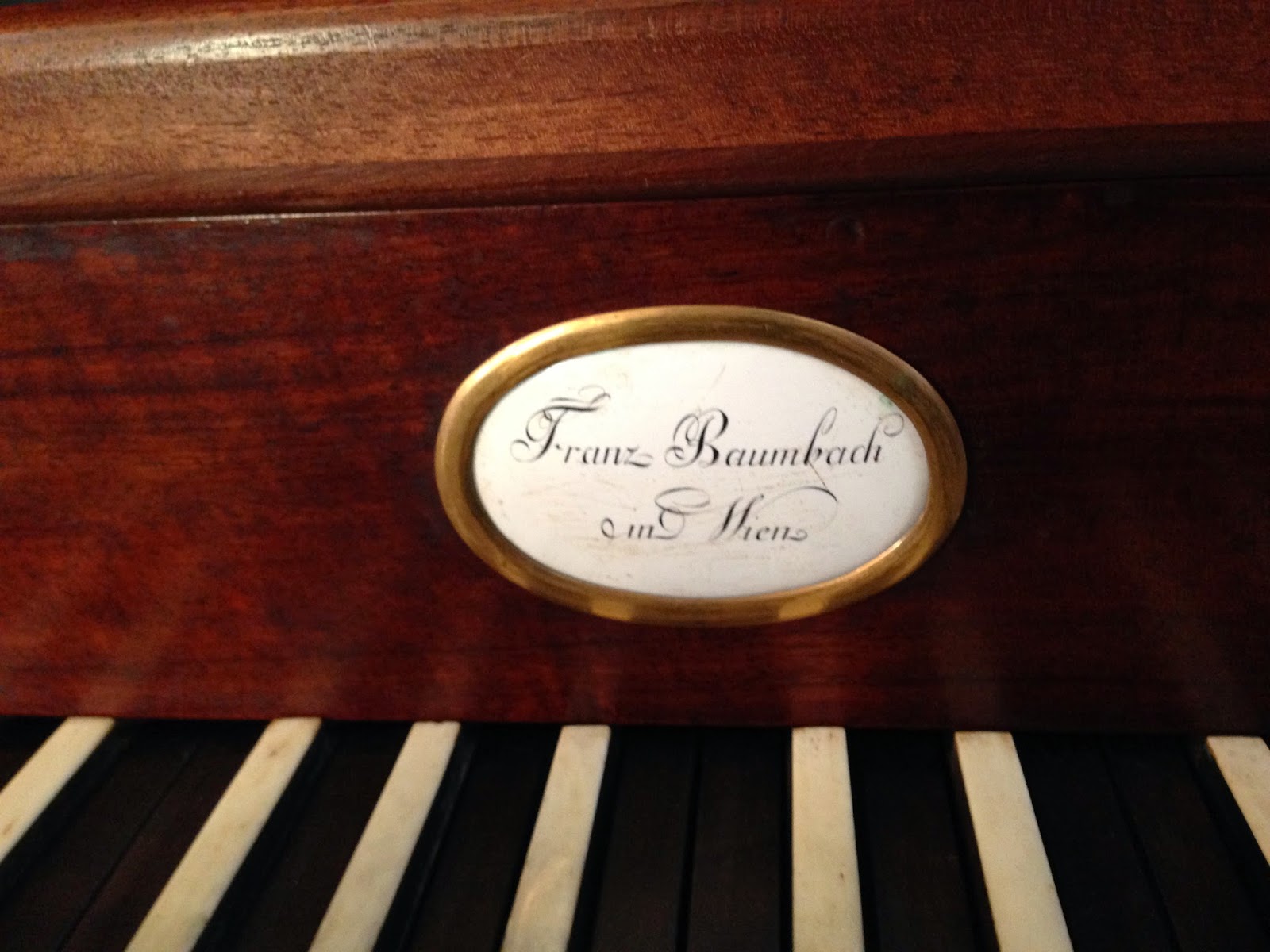 But Fadini likes only the Pleyel made by Pleyel himself. He considers these to be the best sounding instruments of all time, the most suitable pianos for Chopin's music. Listening to them and to Fadini's explanation about the role of proper materials in the reconstruction of historical instruments made me understand my decades-old dislike of historical fortepiano that, to me, typically sounded shrill and out of tune. Yes - they would have sounded like that if the leather on the hammers was worn out, which was bound to happen as soon as one or two years of making them, as Fadini explained... That was an "AHA!" moment and I felt as good as if I discovered America myself. 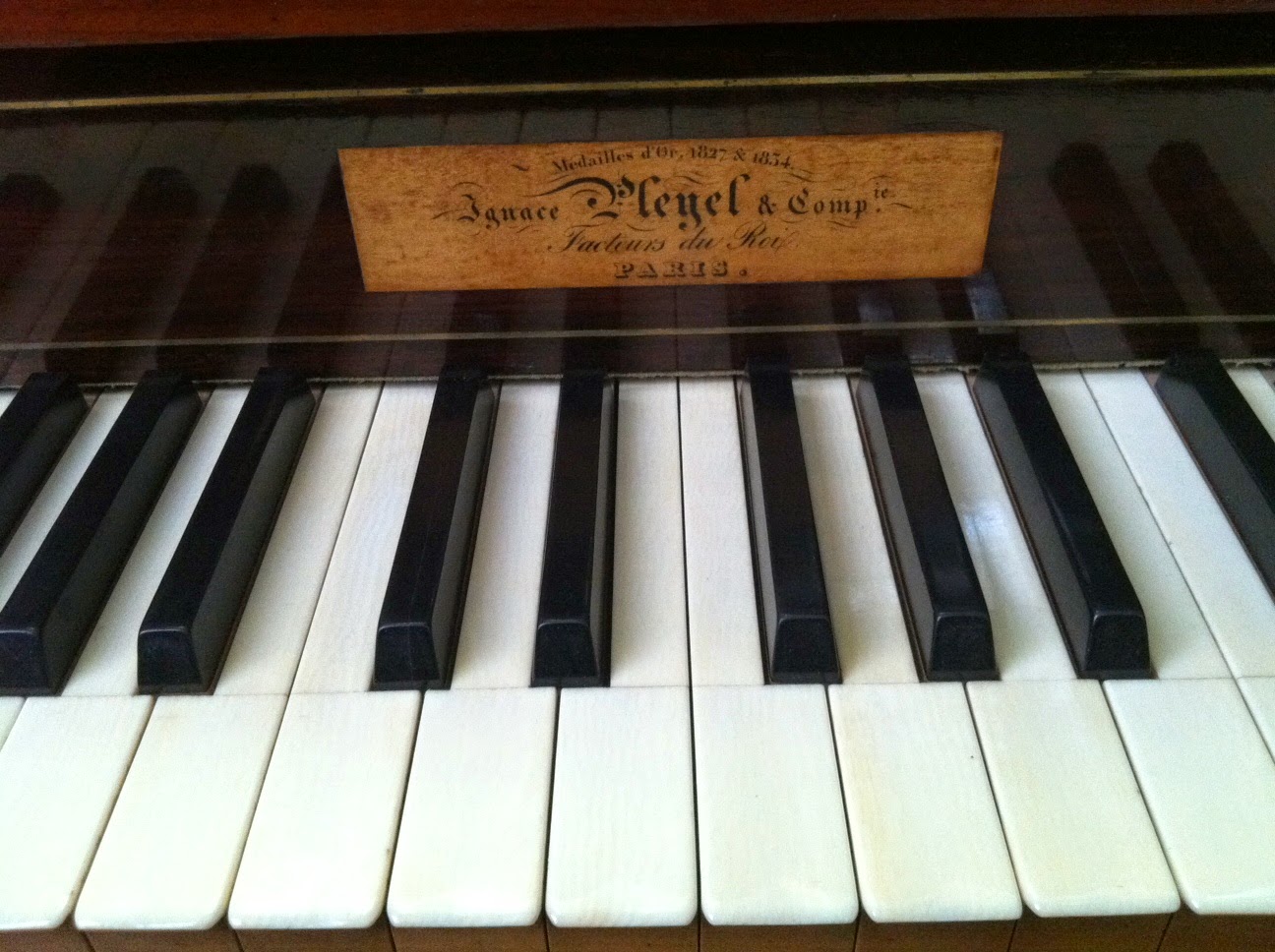 I have not discover America, only moved there... so on they way back home to California, I pondered the many mysteries that remain to be discovered in the performance history of Chopin's music and in the history of his pianos. 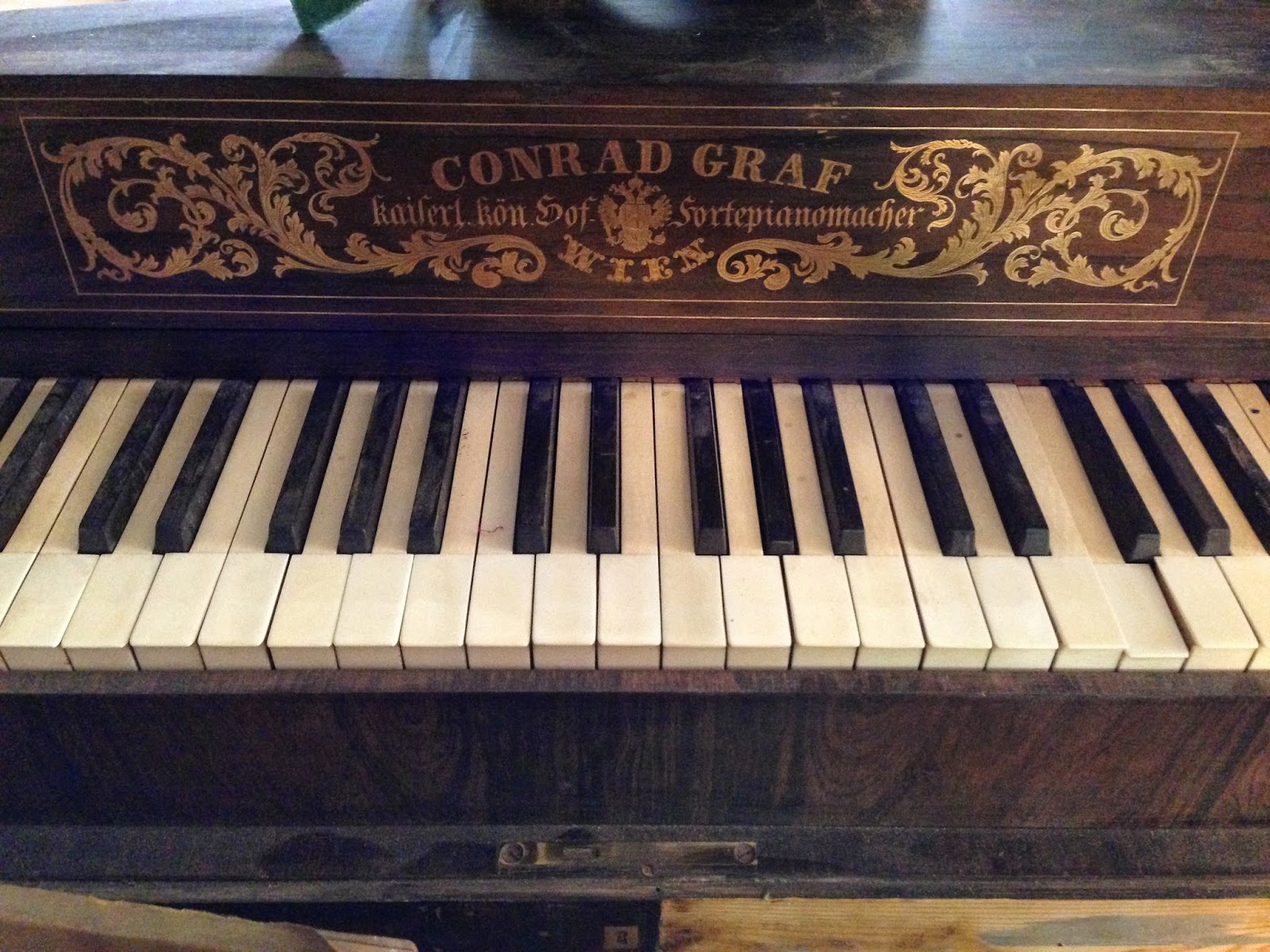 Piano by Graf from Fadini's collection (not associated with Chopin).


An instrument does not have to look pretty to sound good - and pianinos (or upright pianos) do look nice only from the front, and have that fabric covering the mechanism on the other side. Yet, they do have wheels on all legs, which is hard to understand if they are meant to just stand in place by the wall and be pretty, but easy to consider useful - when we realize that the instruments would have been moved away from their stationary position and turned towards the audience, to enhance their sound.  There is a sketch of Chopin playing a piano turned like that. 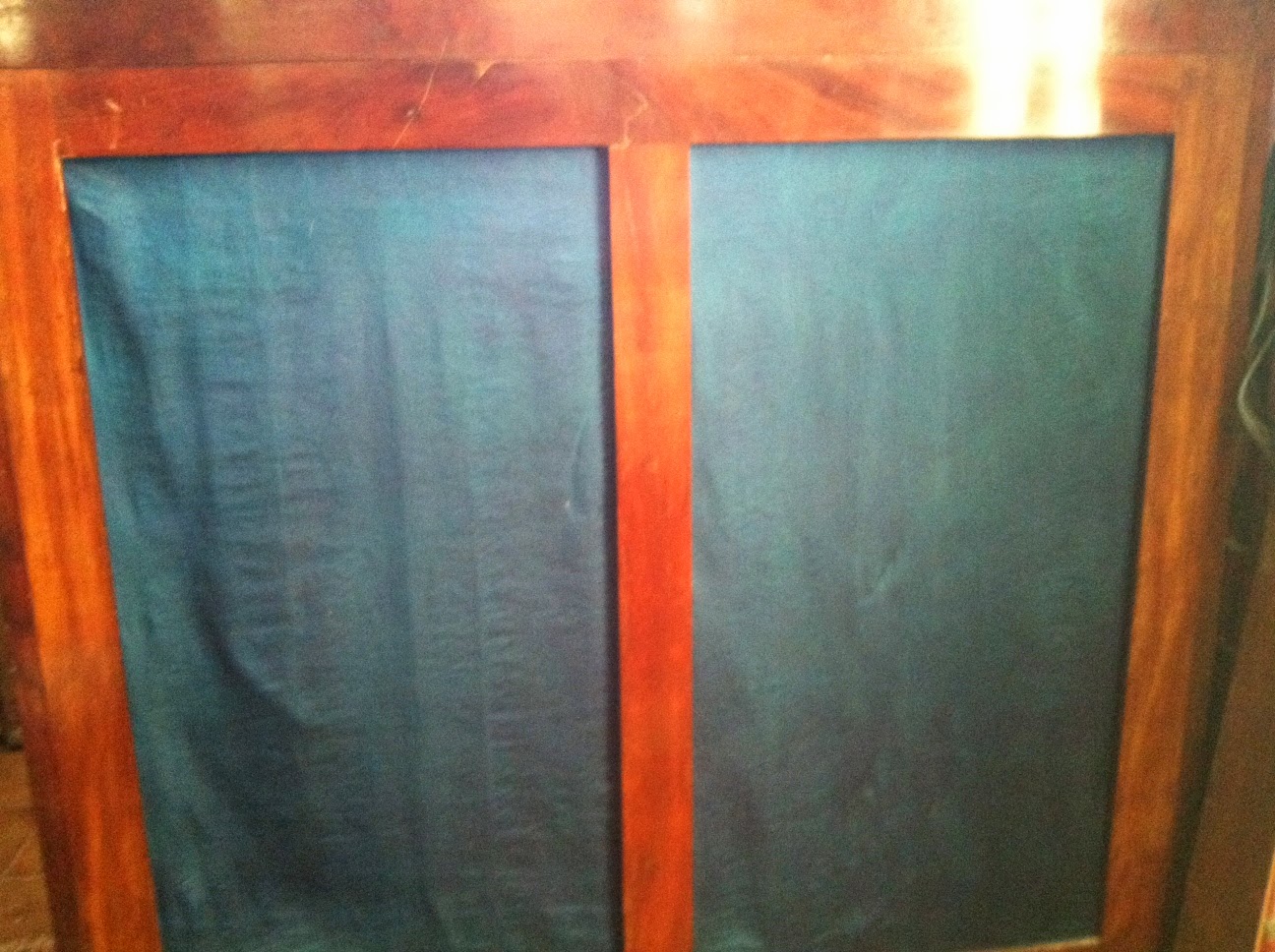 Back side of Pleyel Pianino no. 3495 in Fadini's collection.

The restoration of the piano owned by Mme Natalia d'Obreskoff, often played by Chopin.
http://www.youtube.com/watch?v=mJhhUzBXN1Q
http://www.pianoworld.com/forum/ubbthreads.php/topics/2167504/Re:%20A%20restoration%20of%20Chopin%20Pl.html

ON CHOPIN AND GEORGE SAND

Posted by Maja Trochimczyk at 1:04 AM No comments: