A visit to Paris in the spring cannot be complete without taking a tour of Chopin's traces in the City of Love... With a noted Chopin specialist, Prof. Halina Goldberg of Indiana University, after the end of the Maria Szymanowska Conference in May 2014, I went on a little tour to visit some places related to the life of the great Romantic composer. 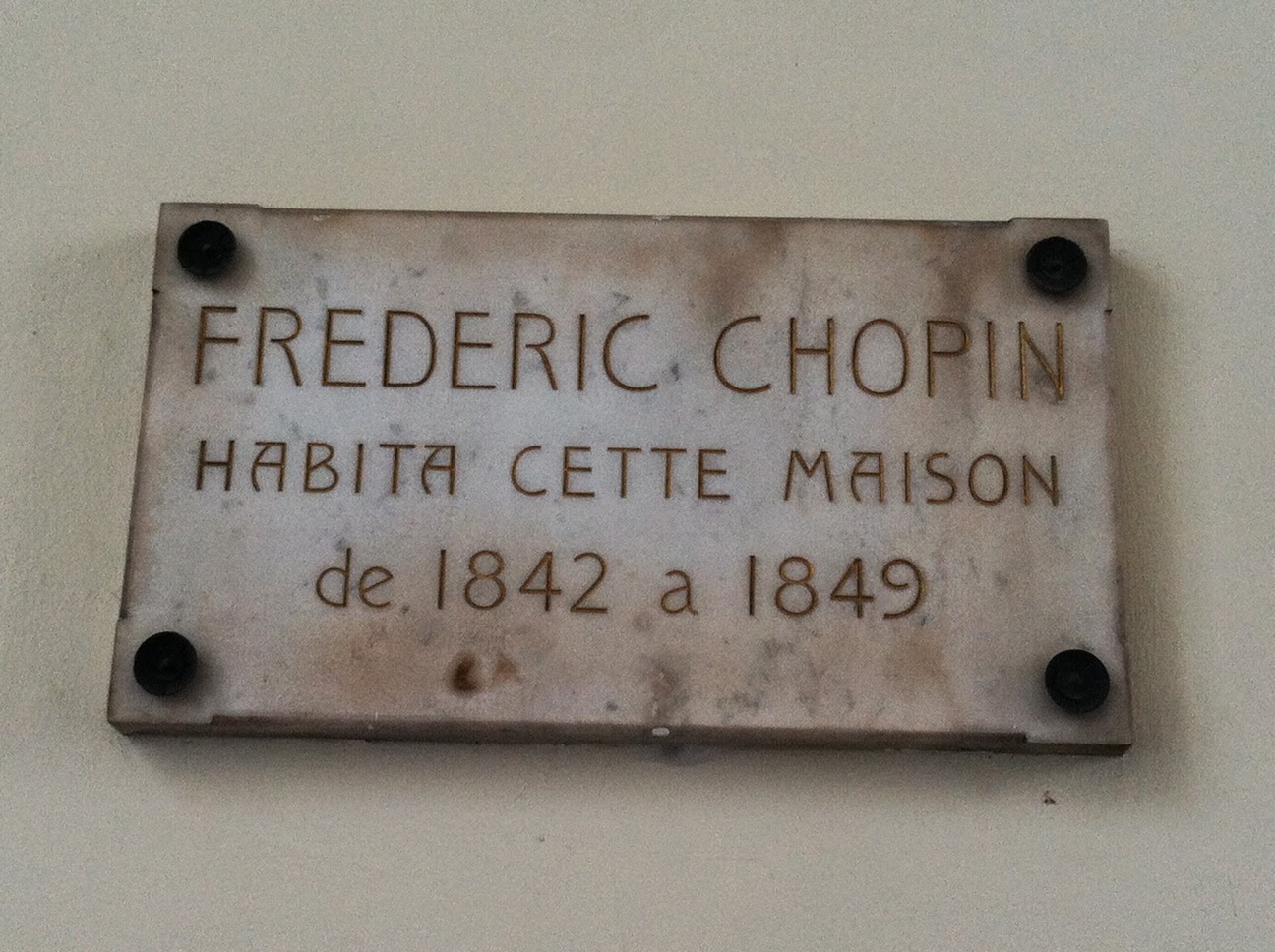 As we walked up the street from the metro, admiring the lovely streetscapes of Paris, we actually missed the gate to this landmark where Chopin spent his last years.  Located in the 9th Arrondissement at 80, rue Taitbout, the square is actually a rectangular yard with a fountain and trees, and the doorway to Chopin's former apartment is on the left side of the internal gate. 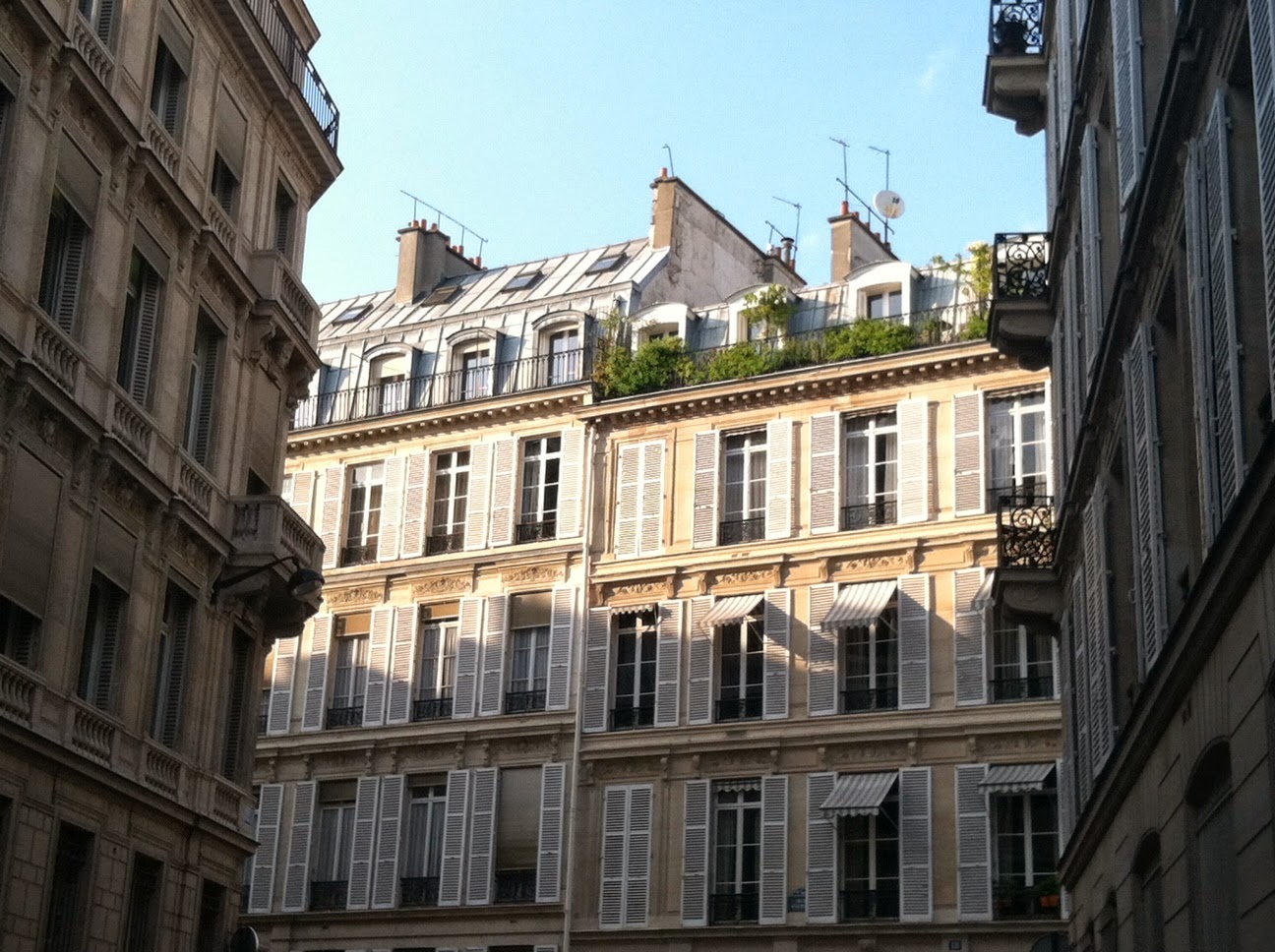 We went to the next corner, the street ended and decided to turn around. Only then did we see the inscription next to a green metal gate. 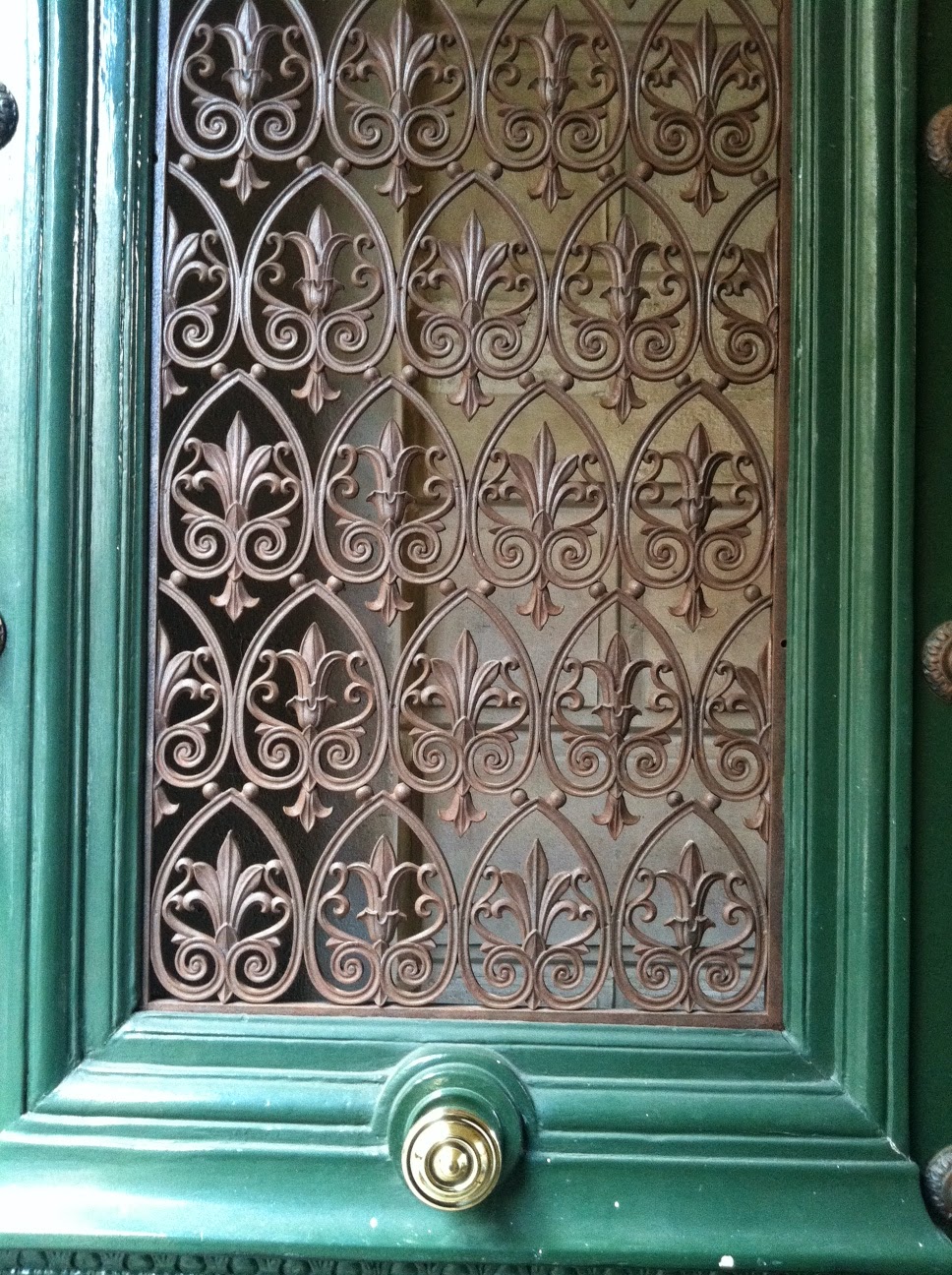 Once inside, we saw an engraved map of the square, with apartments of  famous occupants marked, we turned into a gate... and voila! Two steps lead up to Chopin's door, no. 9, with a sign identifying the place on the left.  He lived on the first floor, did not have to walk high up the stairs. After nearly seven years, in the fall of 1849, he moved to Place Vendome where he died on October 17, 1849.  The years at Place d'Orleans were difficult but also filled with blessings - his health was deteriorating, but there were many friends, artists and musicians in the "New Athens" of the Square and he had companionship and warmth of affection of his admirers nearby. 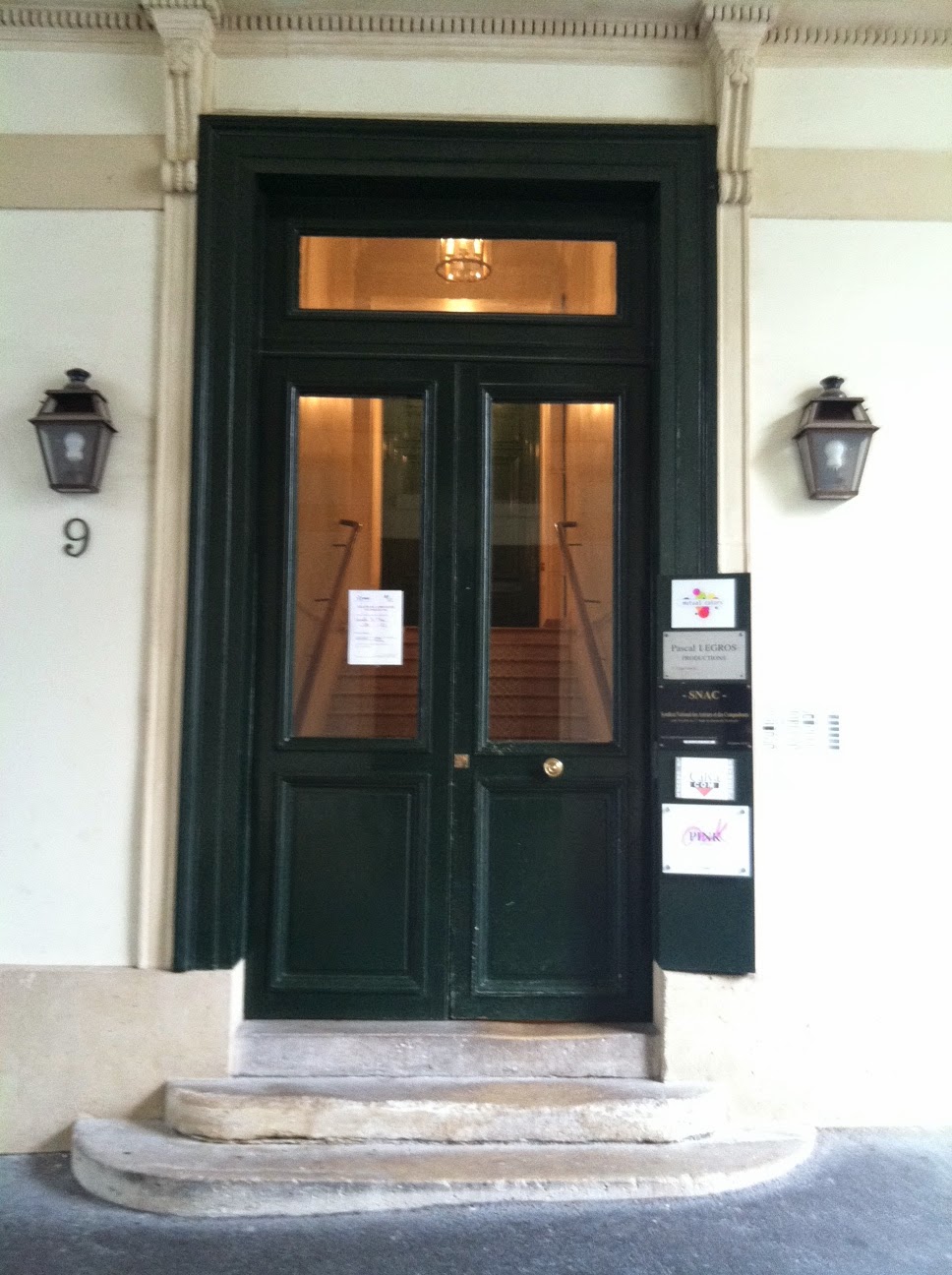 The two steps leading to the door of Chopin's staircase. 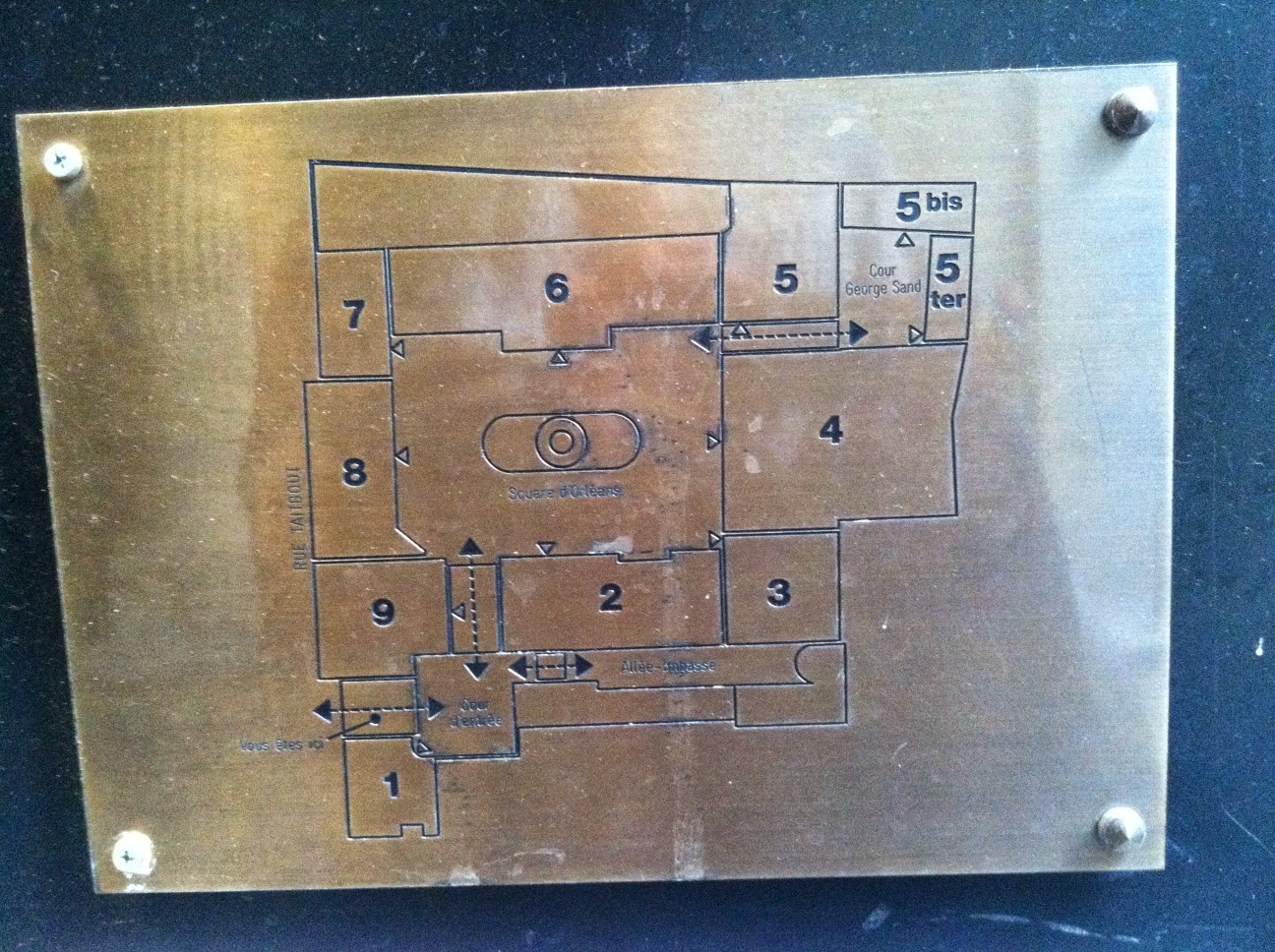 The Map of the Square d'Orleans.

Once we passed through the gate, we entered the courtyard, which was very pleasantly arranged, with pansies in bronze vases, potted plants, and large magnolia trees. We looked up into Chopin's windows on the first floor in the corner. 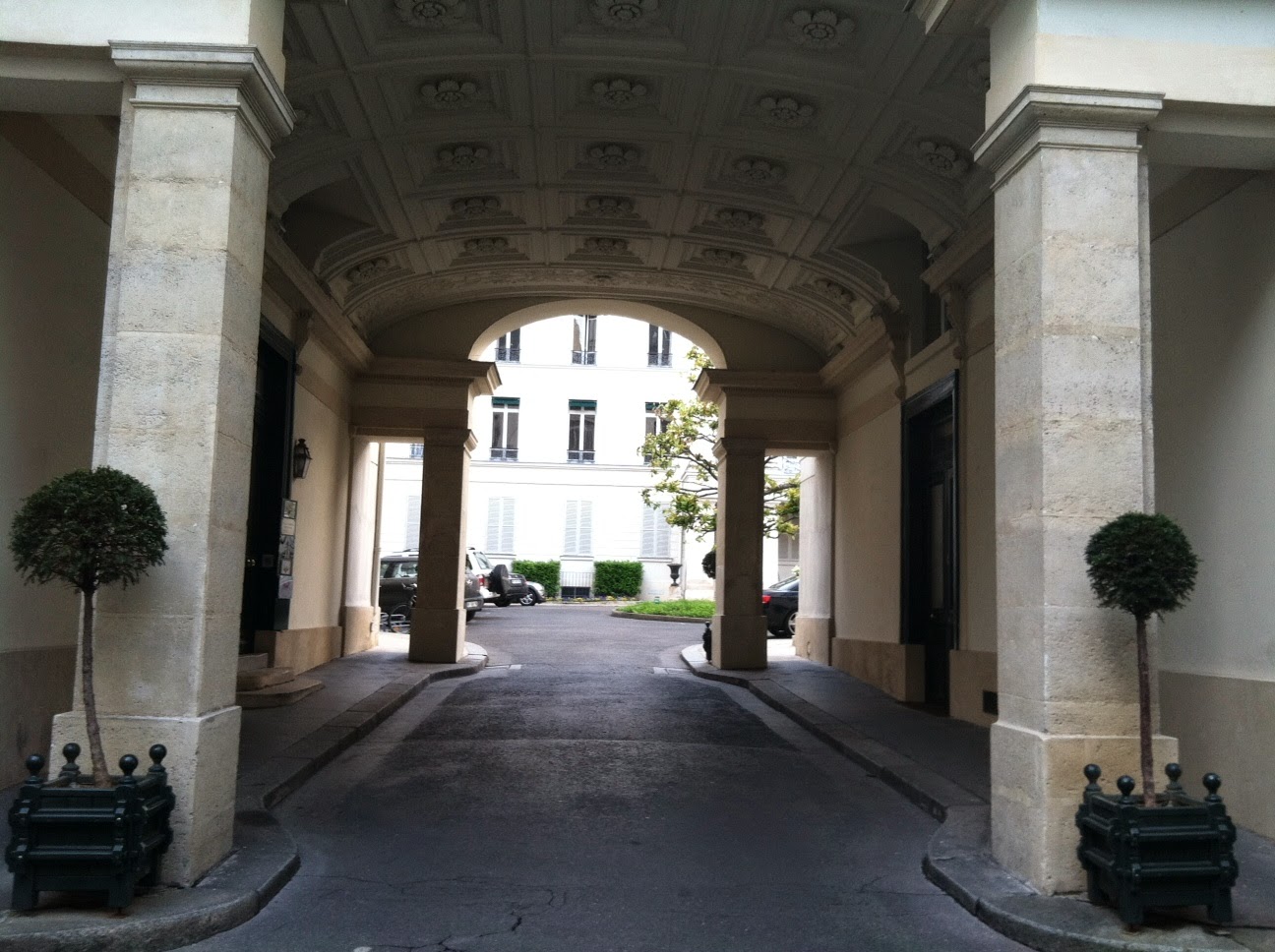 The door to Chopin's staircase is on the left. 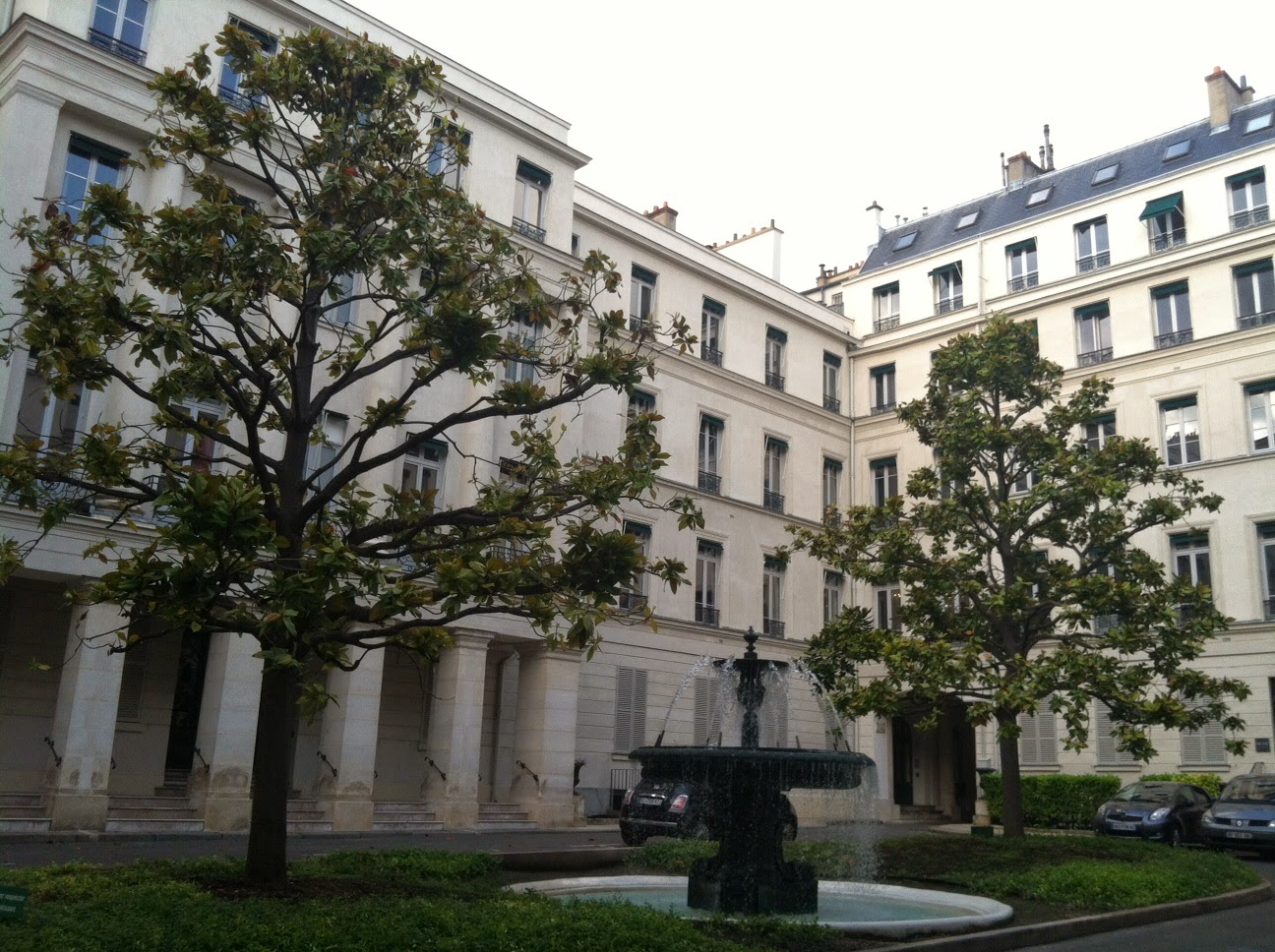 Chopin's windows would have been on the first floor in the corner behind the tree. 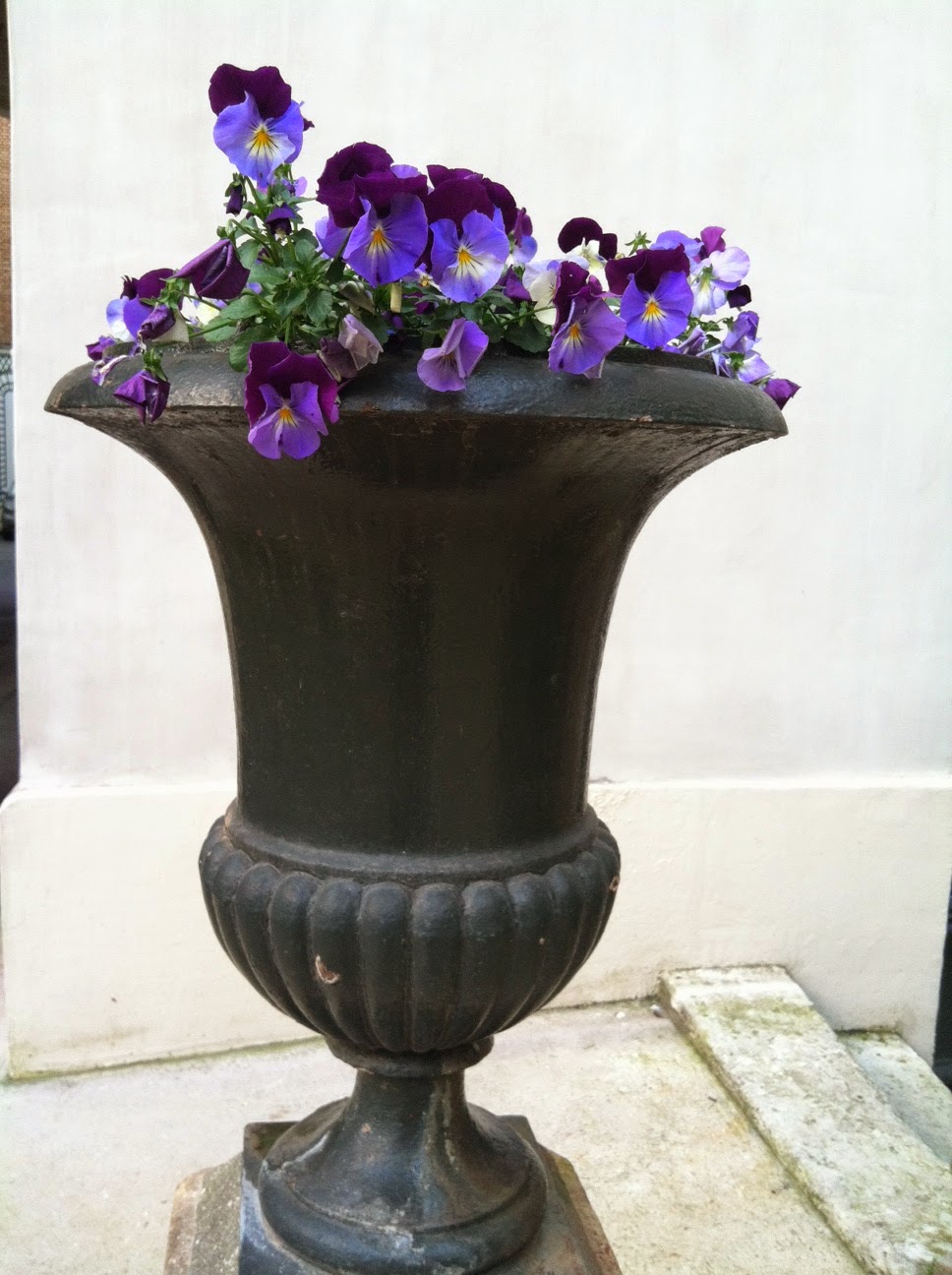 We took another look at Chopin's building and went to search for the one where his lover, George Sand (1804-1876) resided. It was very close by - even after the separation of lovers, she kept an eye on him! 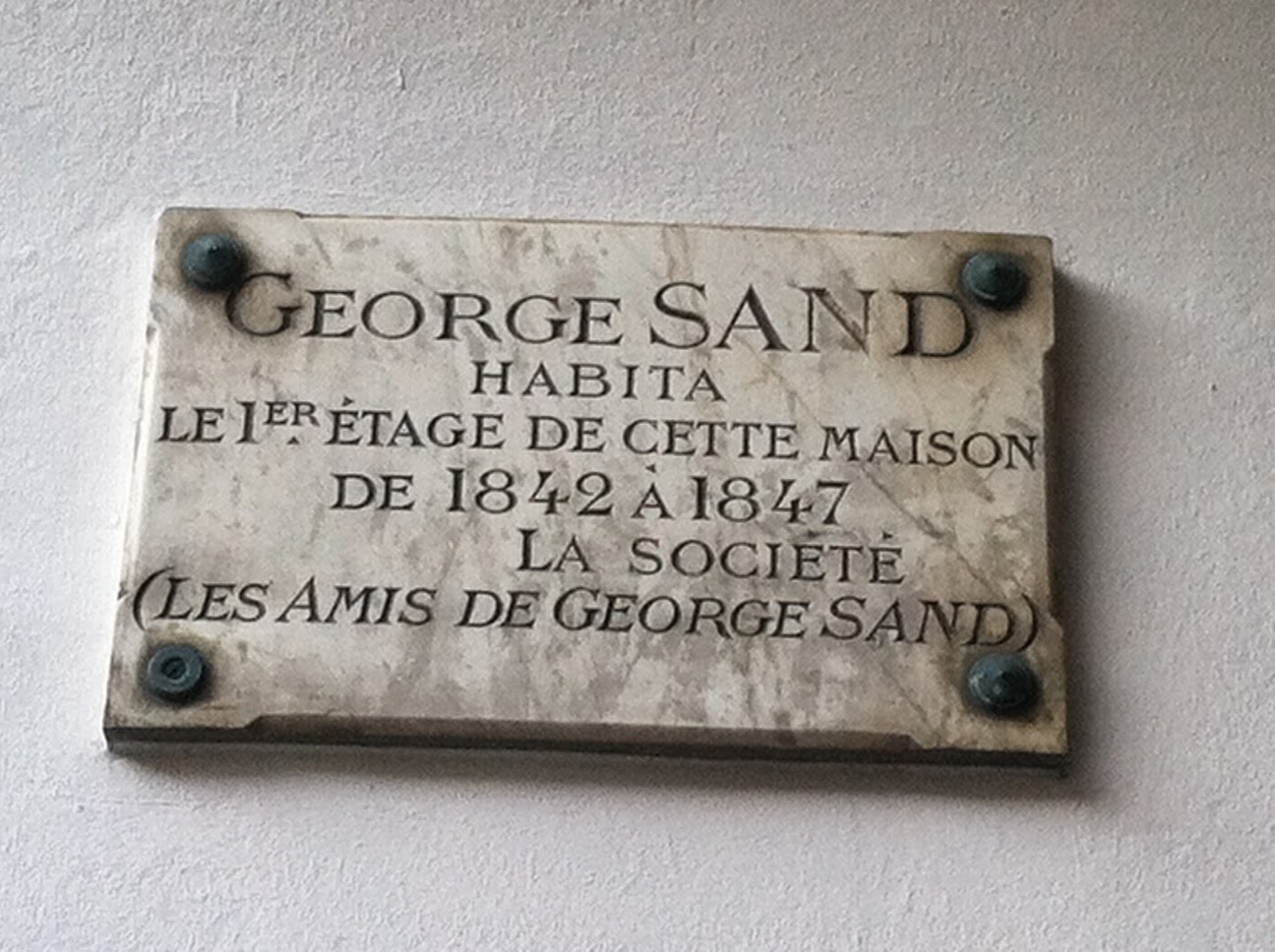 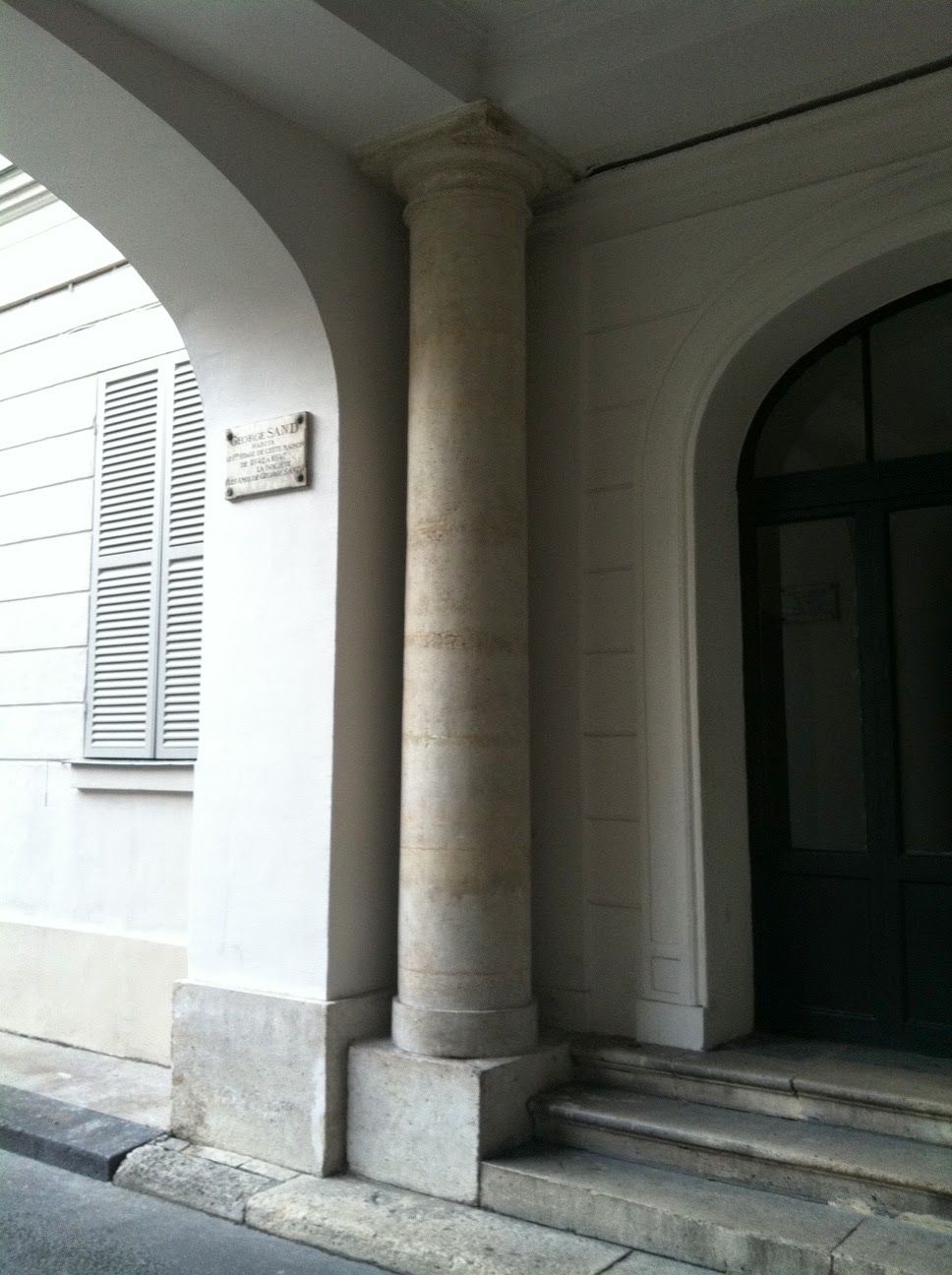 Entrance to the apartment occupied in 1842-1847 by George Sand 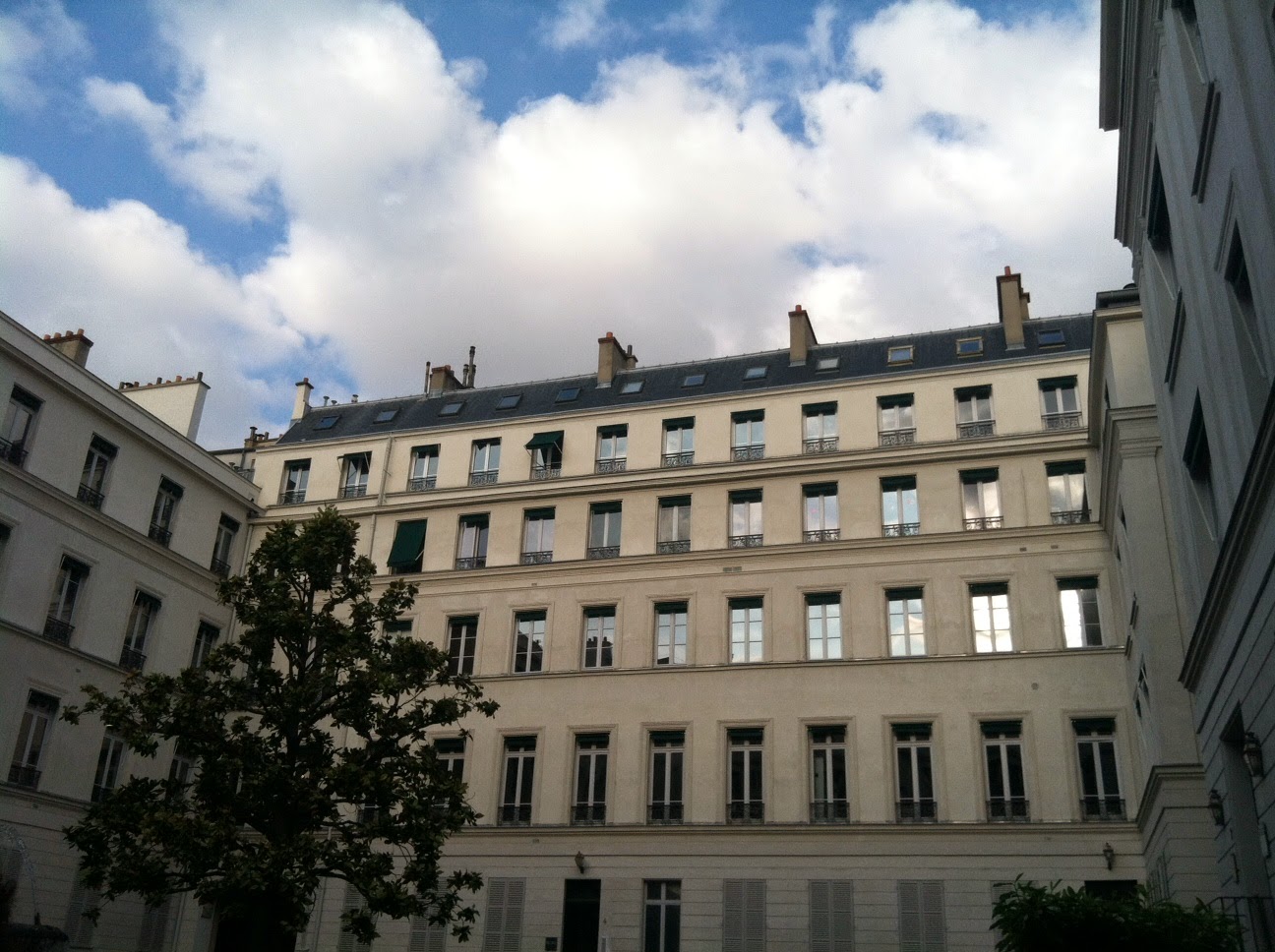 The interior courtyard where Chopin used to live.

I wondered around for a while. I went on to the next courtyard and looked down on the ground under my feet. The ancient cobble stones, overgrown with moss, were probably from Chopin's time. 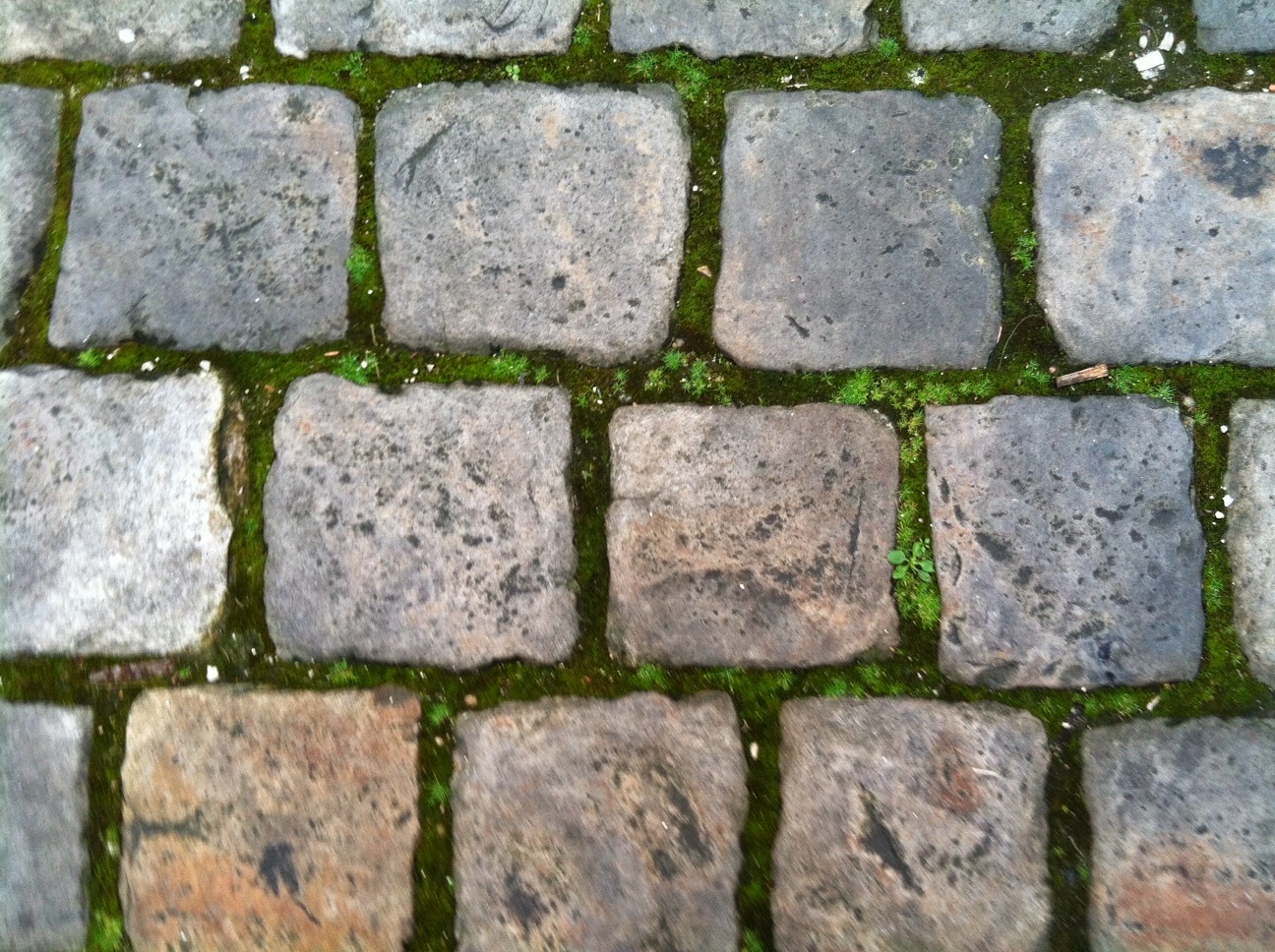 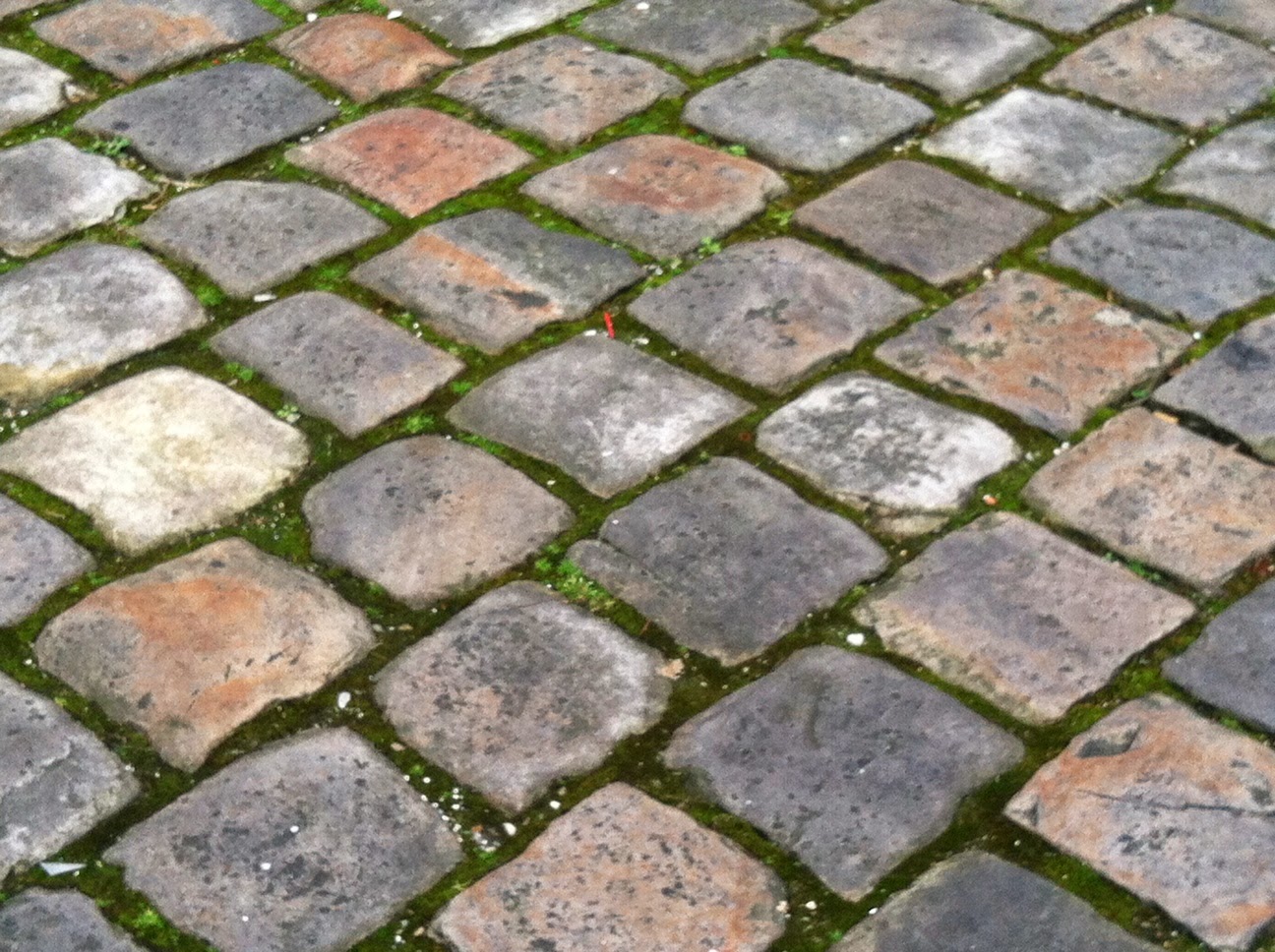 While lounging around the courtyard, filled with new parked cars and passersby, I thought about the beautiful poem by Adam Zagajewski describing Chopin's last days and the lasting beauty of music.  I was particularly impressed by the poem's interpretation by Zagajewski in a documentary film by Ophra Yerushalmi, "Chopin's Afterlife" - I was still thinking about our great, fragile musician and the pain of his last days, as we were walking away to our next destination.

Having satisfied our curiosity about Chopin's final years in Paris, we went in search of a location of his first years: the site of his debut concert, Salle Pleyel, not far from the Square d'Orleans. Sadly, the Pleyel company has just gone out of business; people stopped buying pianos and a great tradition ended. In 2011, I visited the modern Salle Pleyel, with a wonderful display of colorful pianos. 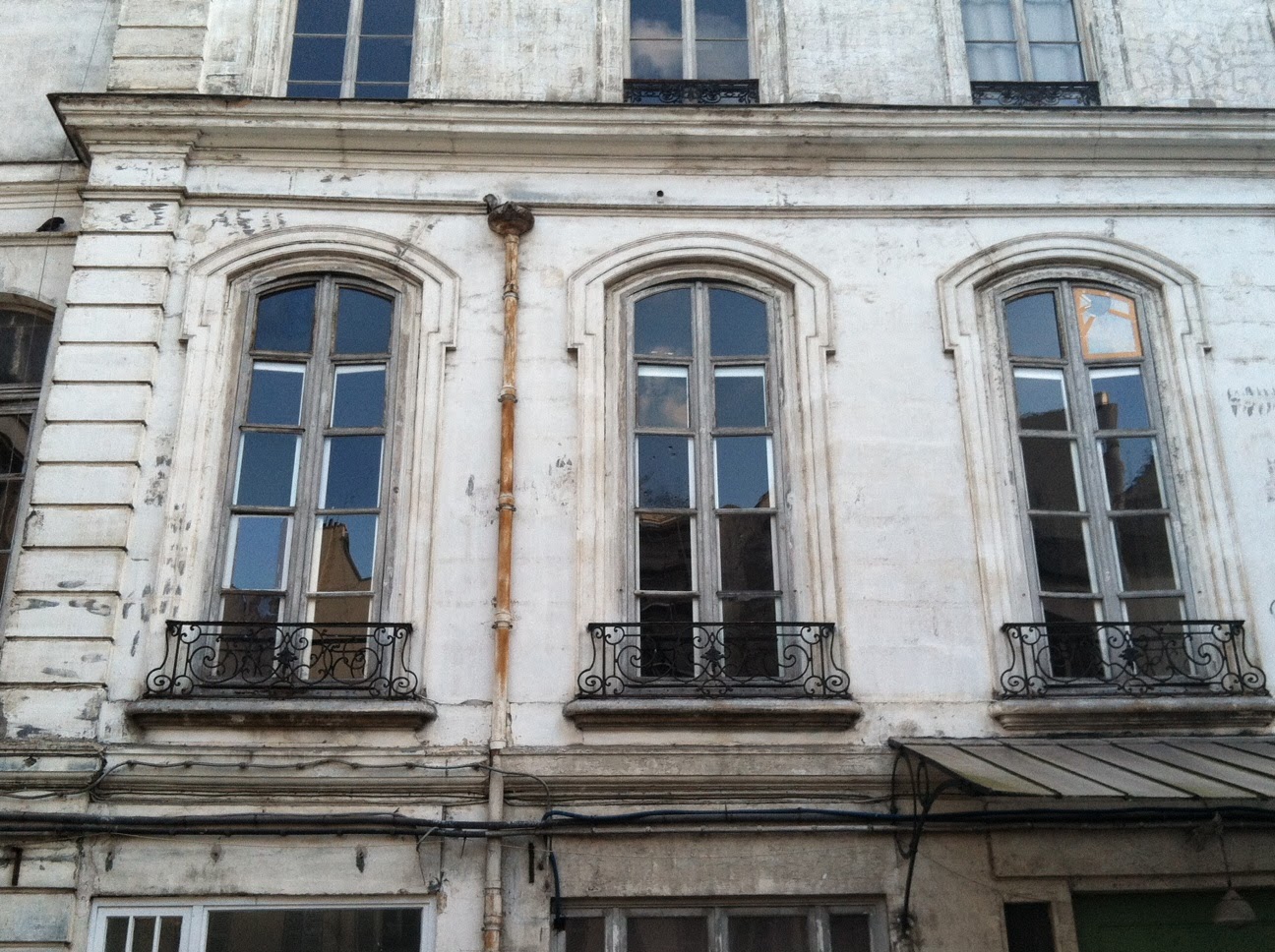 But Chopin's debut and his last public concert took place at at the former location of the Salle Pleyel, now somewhat decrepit. The tall ballroom windows gave the place away.  Chopin's music first sounded in its spacious space in 1832: Chopin plays the Concerto in F minor and Variations, Op. 2, on the Aria "La ci darem la mano" from Mozart's Don Giovanni.

The windows were filled with flickering candle light on the 16th of February 1848, when Chopin appeared in Paris in a public recital for the last time. Actually, it was not "in public" - the 300 listeners were all friends of Chopin. Amid familiar faces, surrounded by fragrant bouquets of flowers, Chopin relaxed and played exceedingly well.  His program included études, preludes, mazurkas, waltzes, the Berceuse and Barcarolle. Auguste Franchomme joined the composer in his own Cello Concerto in G minor and they also played Mozart’s Trio in E major, with the violinist D. d’Alard. The complicated program included also songs performed by A. Molina de Mendi and G. H. Roger. 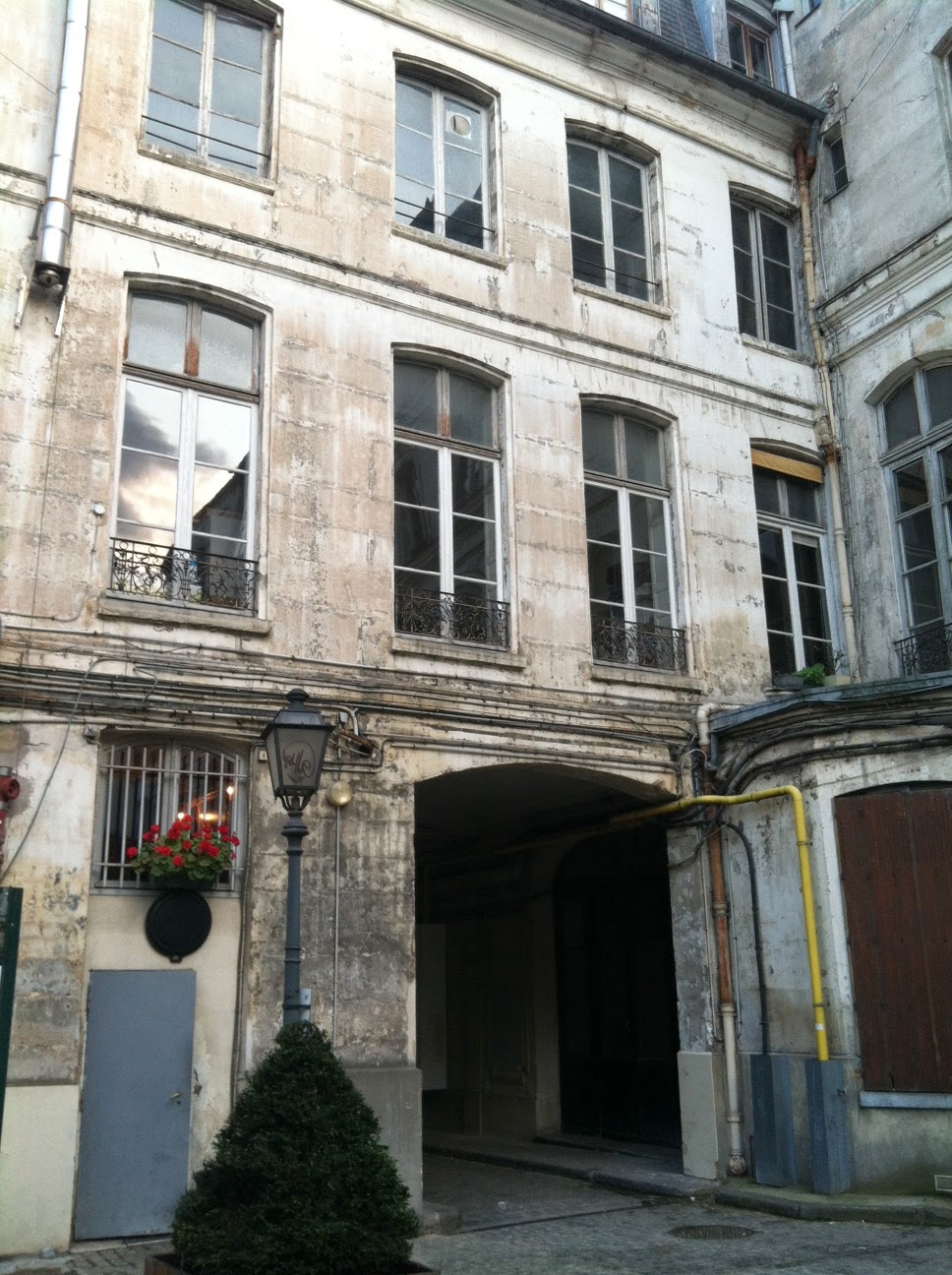 The windows face the courtyard, with some sheds, that were better left out of sight. 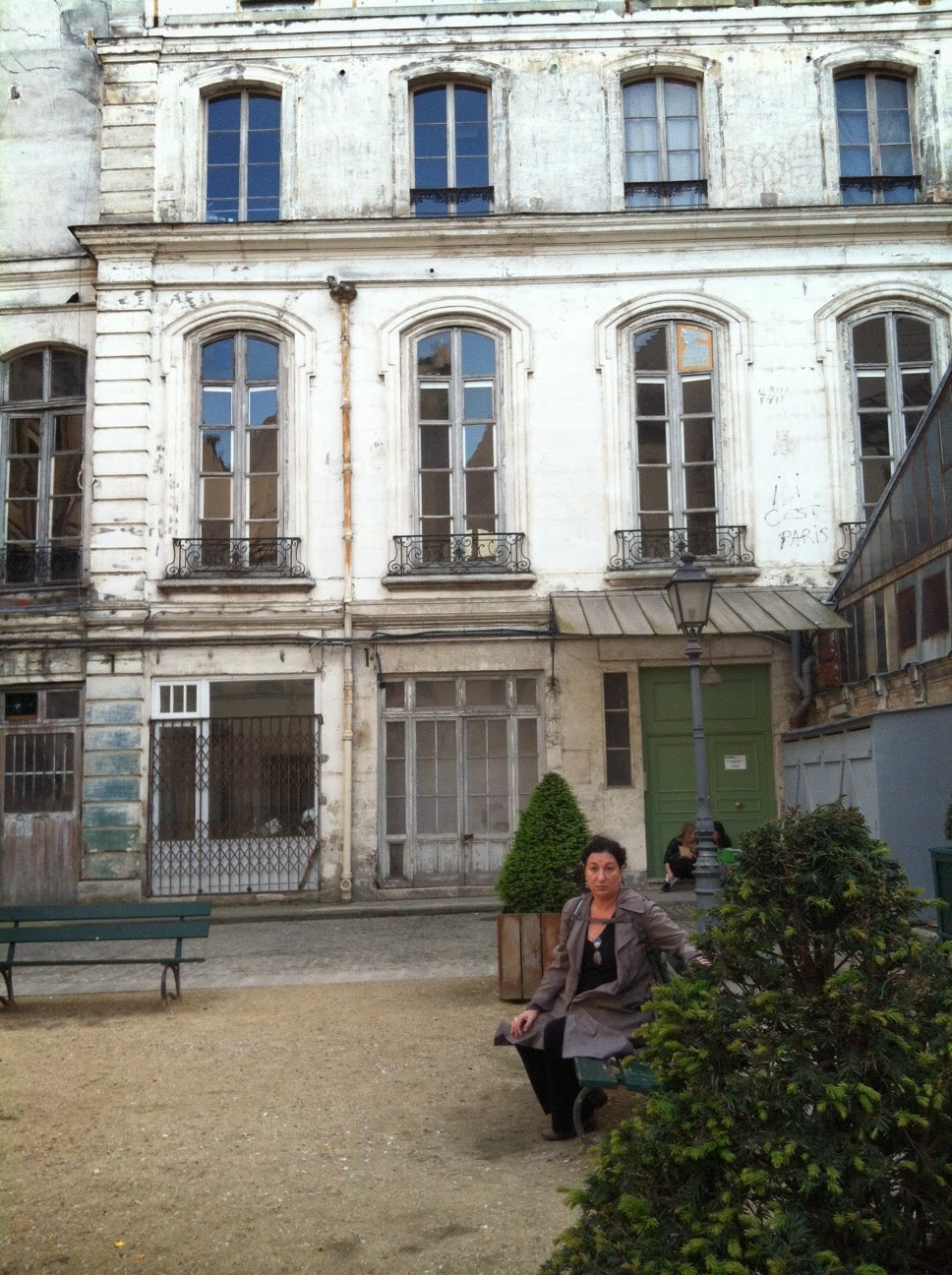 Halina Goldberg sat in the courtyard with the windows of the former Salle Pleyel above. 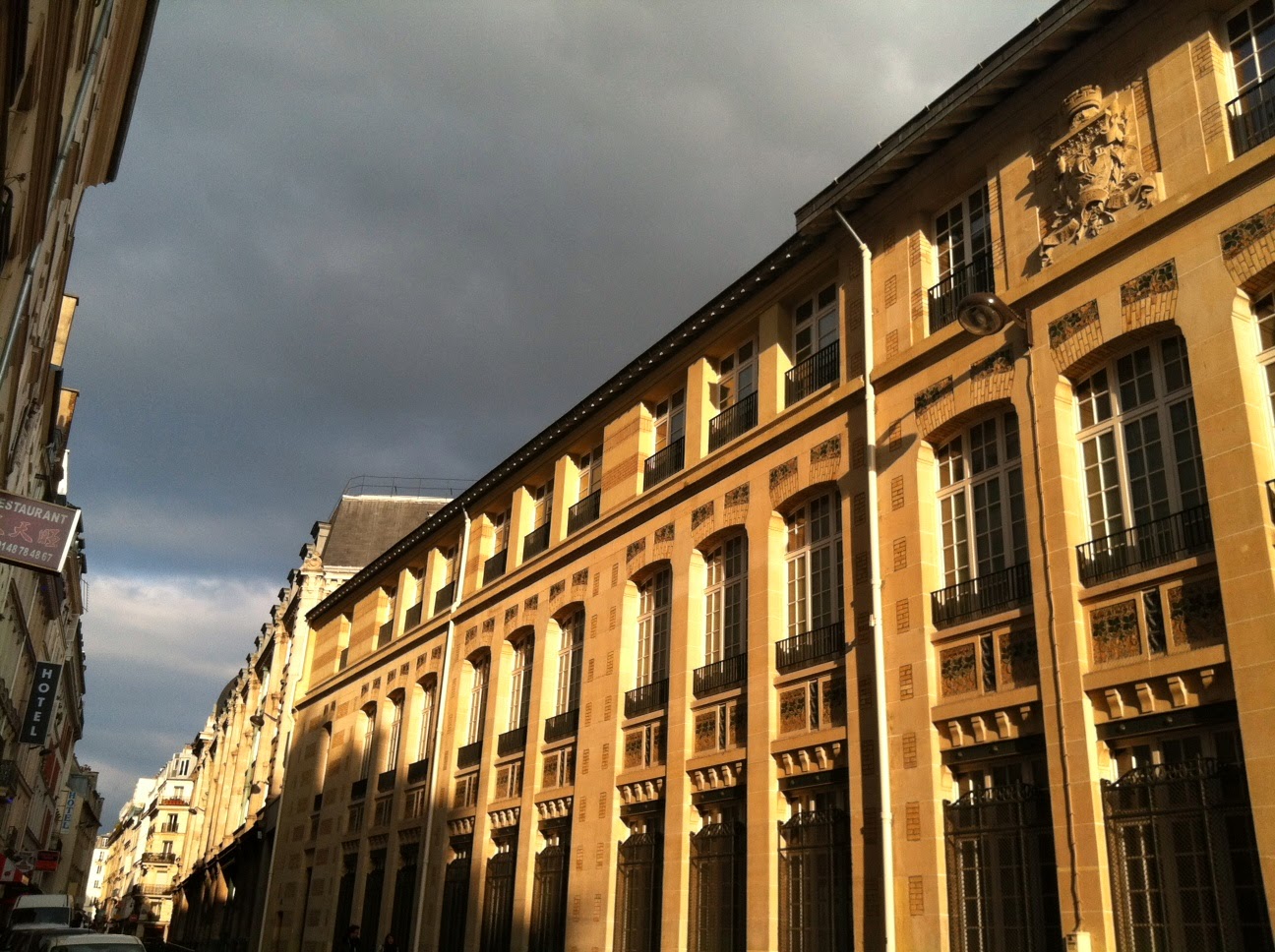 The street leading the Salle Pleyel had a series of somewhat faded buildings.

Since it was getting late, we decided to move on. We had to make one more stop - at the Musee de la Vie Romantique, in a former home of Chopin's friend, painter Ary Scheffer (1795-1858) who created a beautiful portrait of the composer, along with many other wonderful portraits and paintings.

Located at 16, rue Chaptal in the 9th Arrondissement in Paris, the museum includes many artefacts from the life of George Sand and Ary Scheffer, her friend and portrait maker. The painter held regular salons on Fridays, frequented by his artistic neighbors: Chopin, Sand, Franz Liszt, Pauline Viardot, Eugene Delacroix and others. 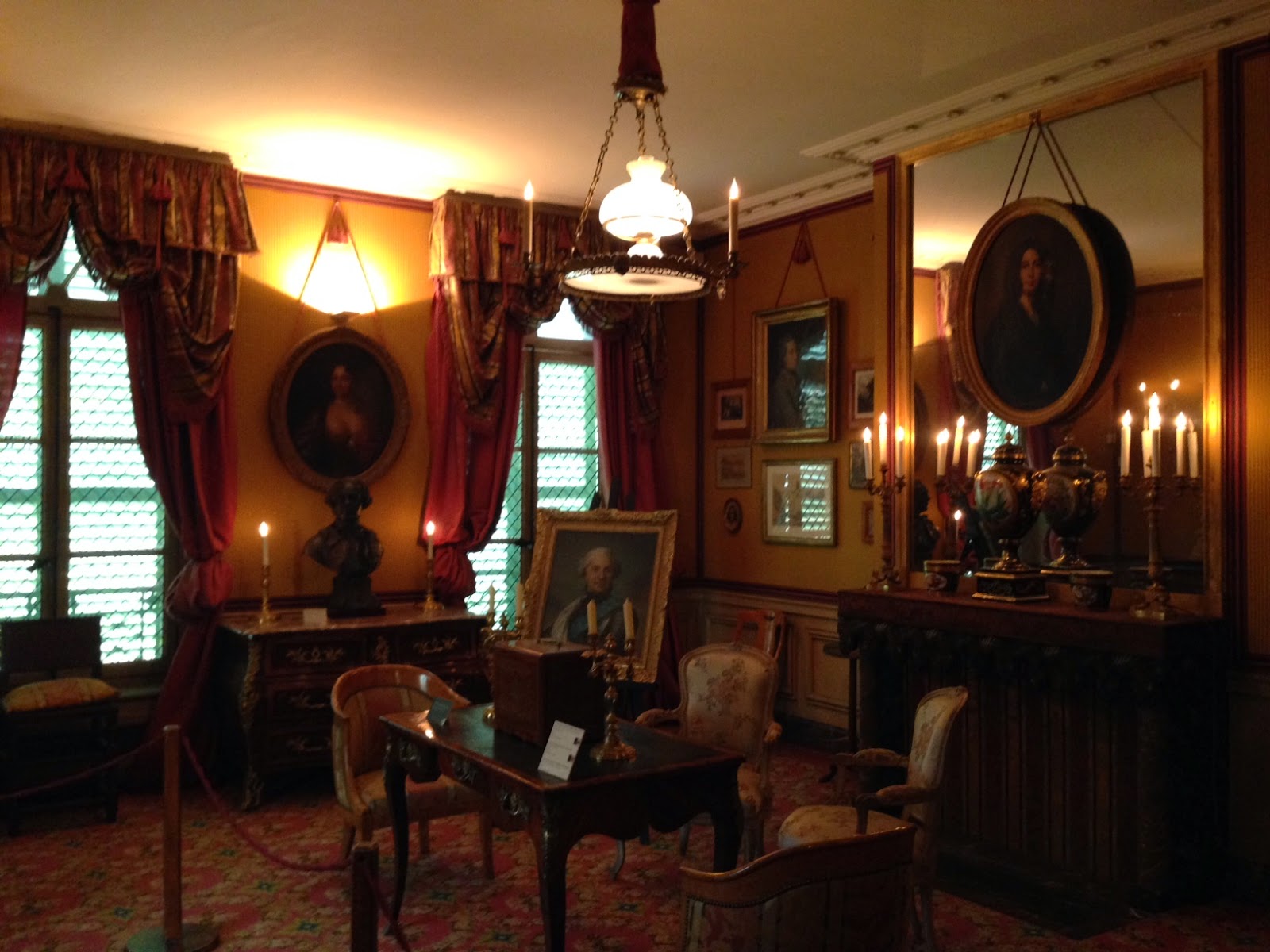 Salon in the Musee de la Vie Romantique with the portrait of George Sand. 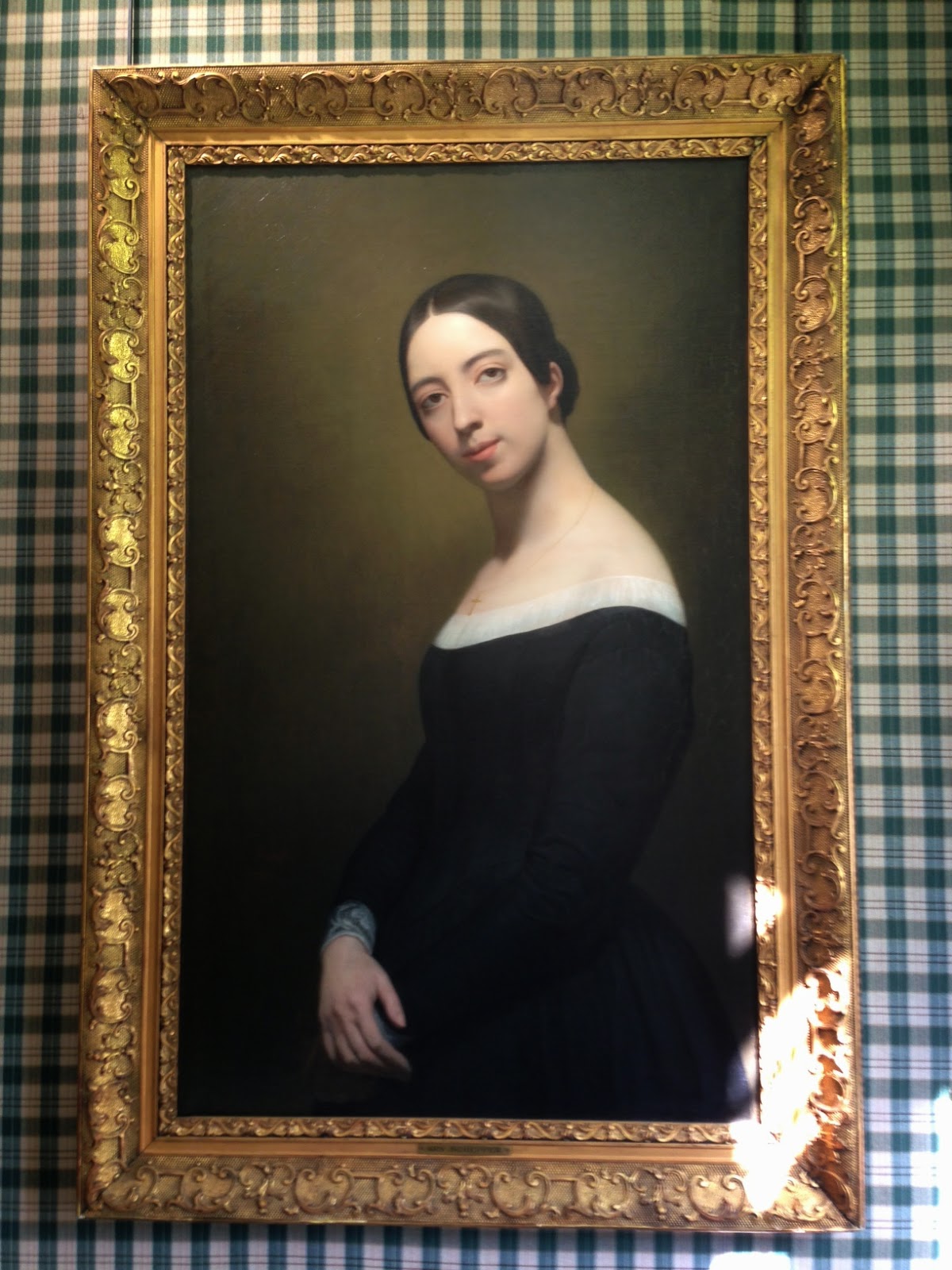 One of the portraits was of Pauline Viardot (1821-1910), Chopin's friend, and a wonderful Spanish singer. 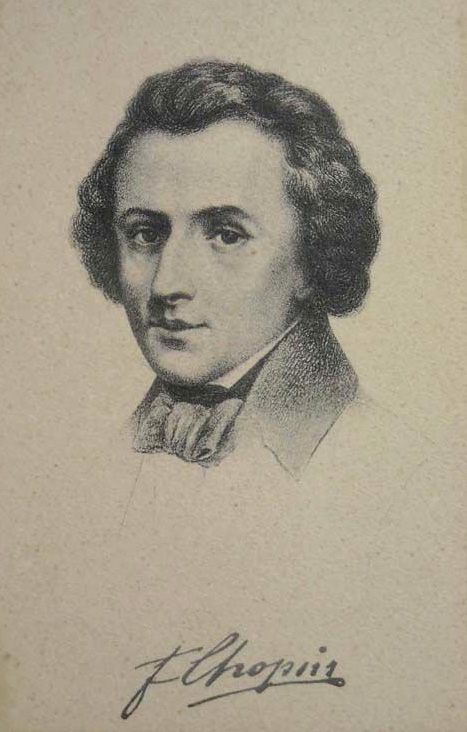 The cosy rooms of the Museum gave an insight into artistic interests and leisure activities of Sand and her family - her son Maurice, daughter, Solange,  and her son-in-law, sculptor and artist, Auguste Clesinger.  There were family jewels, paintings by her brother Maurice and mother, and other memorabilia. There is a Sand family tree, and her portrait as a young girl. 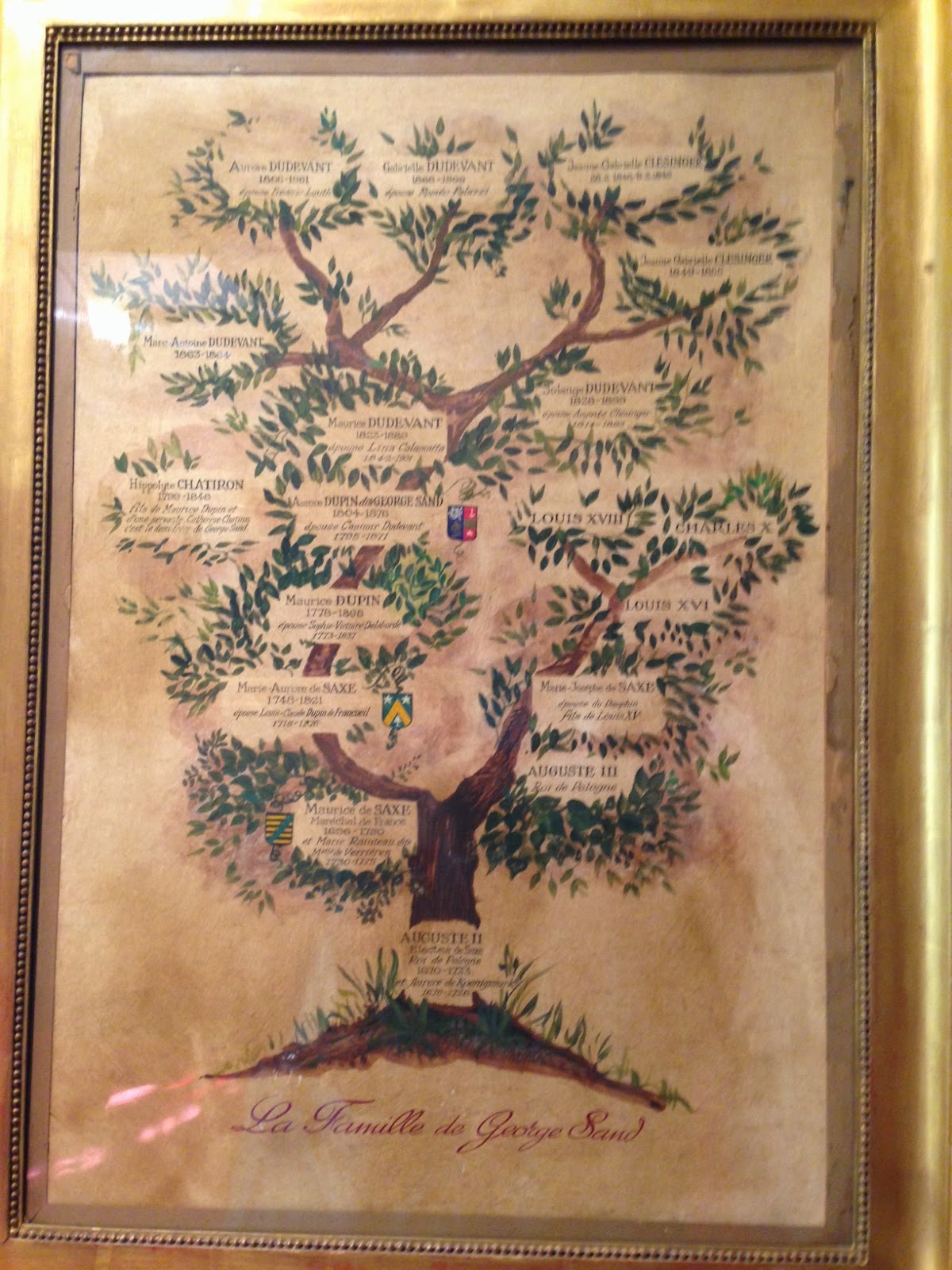 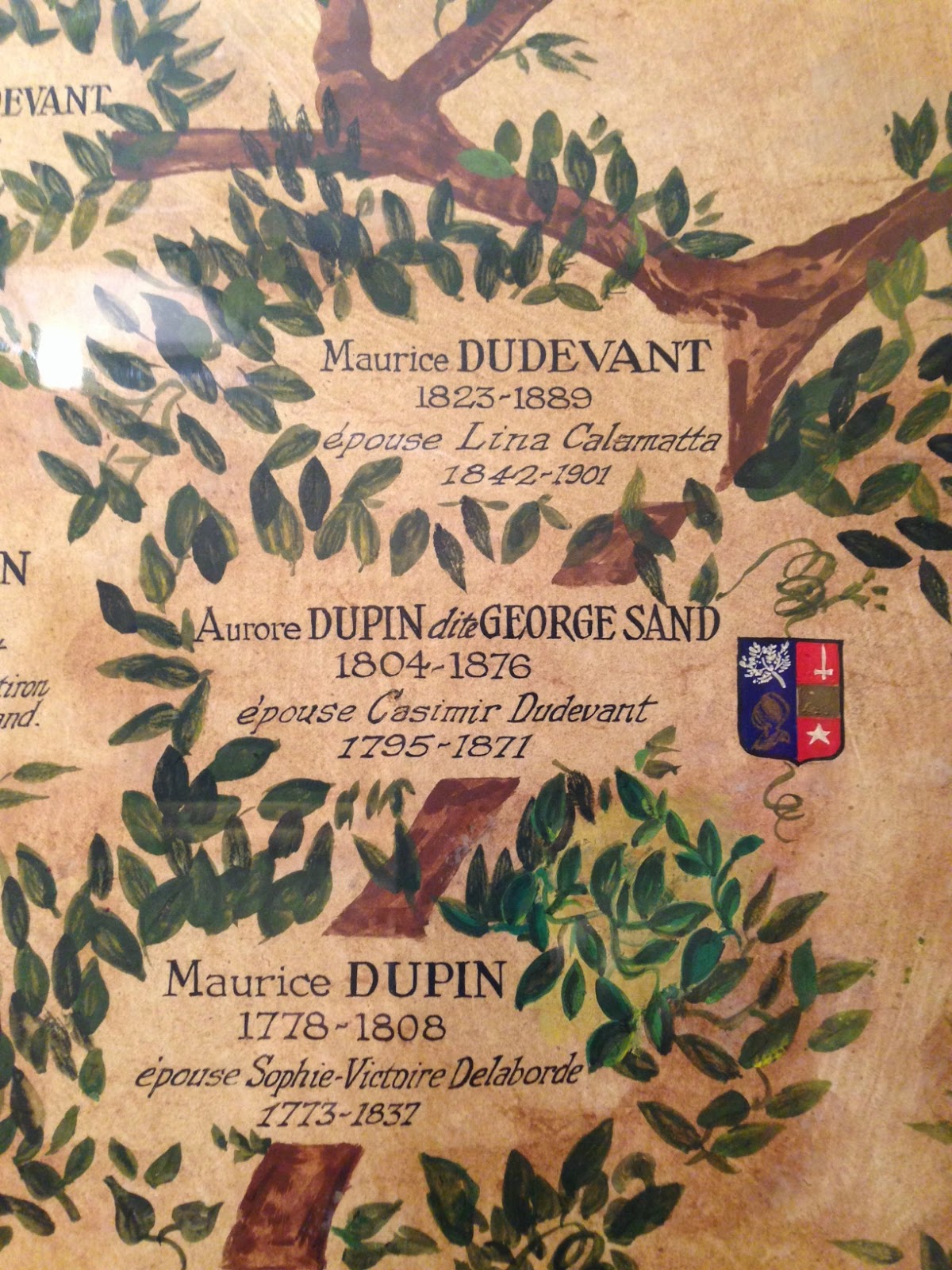 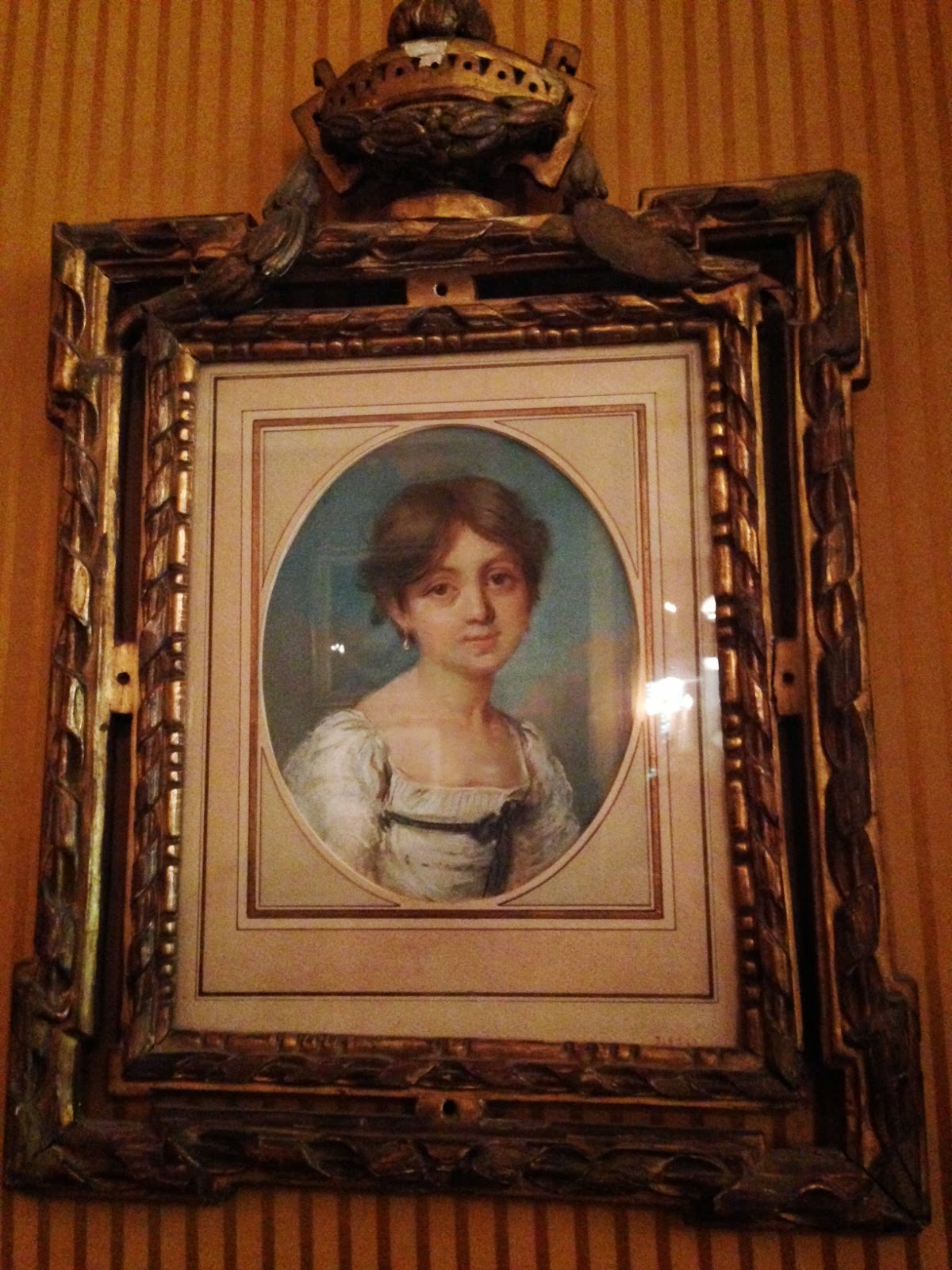 Aurore, the future George Sand, as a child. 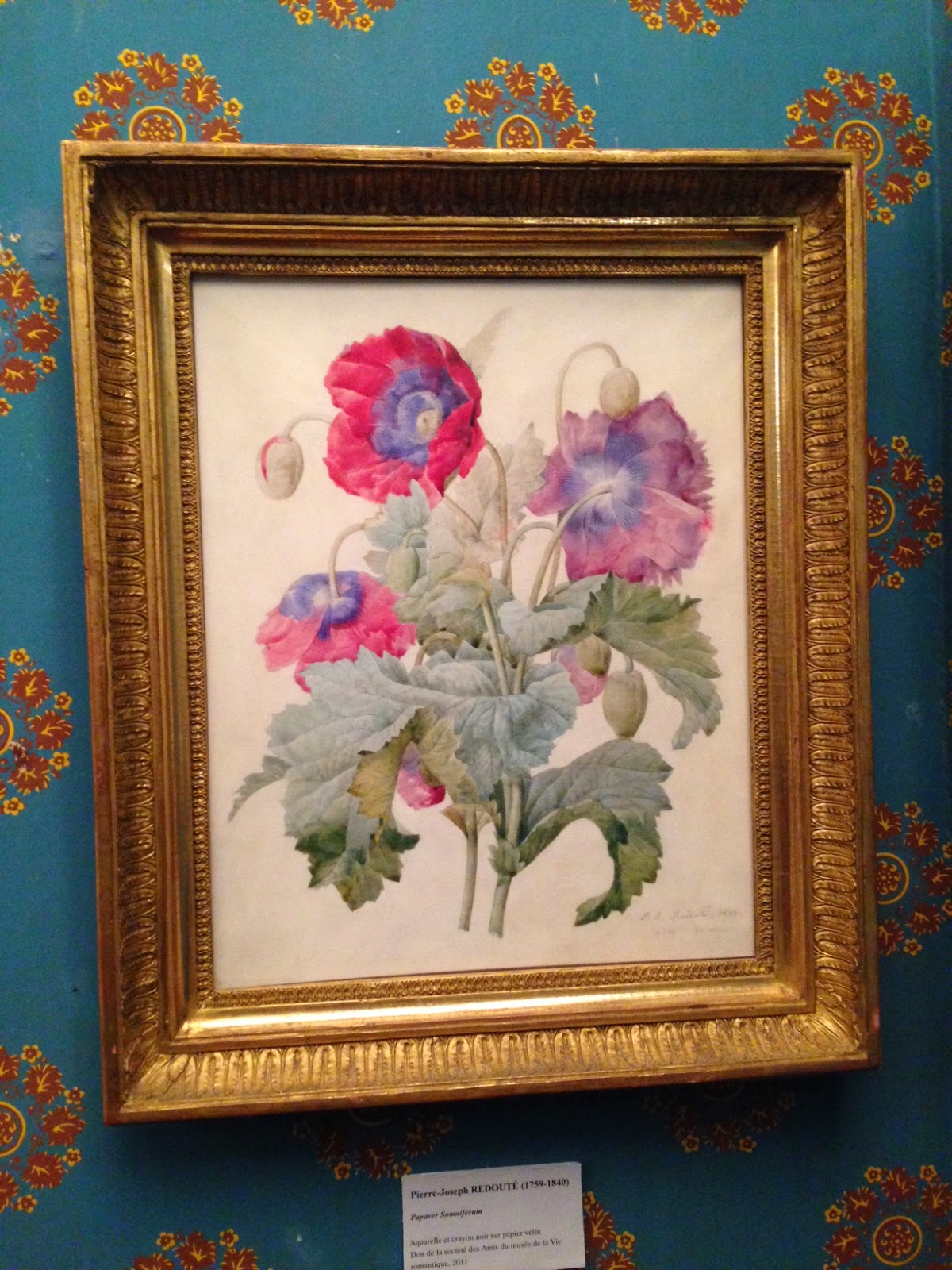 I was happy to see the painting of poppies by Pierre-Joseph Redoute (1759-1840)
and the antique roses in the garden.

Posted by Maja Trochimczyk at 2:33 AM 3 comments: