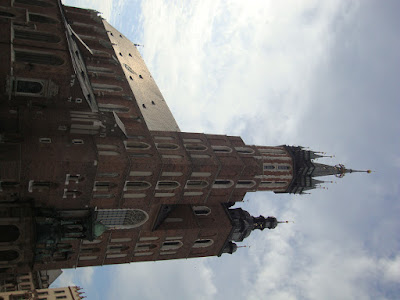 The silver tones of the trumpet brighten the crisp morning air. The trumpeter, unseen, plays from the top of the tower of the Marian Church in the Main Square of Kraków, Poland. It is still foggy and the streets are almost empty, save for delivery trucks and the most courageous flower sellers filling their vases with water in the market. The melody is called “Hejnal Mariacki” and named after the Marian Church where it is played four times at every hour from tower windows opening to the four directions of the world. The Hejnal flows and echoes off the rooftops until it suddenly ends, as if interrupted. This abrupt end, repeated each hour, every day (96 times per day, if all repetitions are counted) is a memorial of sorts.
A legend has it that during a Mongol invasion in the 13th century the Hejnal, played as a warning by the town’s guard, was cut short by an arrow that killed the trumpeter and the melody has been played the same way ever since. Actually, as documented by historian Jerzy Dobrzycki (Hejnal Krakowski, Kraków: PWM, 1983), there is no historical proof of that story and the first record of the melody’s existence dates back to 1392; it was initially played at dawn and dusk, to mark the opening and closing of the town’s gates. It has sounded daily since 1810, and the performances were institutionalized in 1873 when the professional Fire Brigade was created in Kraków and the firemen were given the task of playing the Hejnal. Since 1927, the Polish Radio has broadcast the noon performance nationwide. During my Polish childhood in the 1960s and 1970s, the noon performance was broadcast by Polskie Radio 1 (“Jedynka”); it is still on air daily.

The four repetitions of the melody, separated by the steady steps of the trumpeter walking from window to window, appear after the 12 strokes of the bell announcing noon. The bell, the steps, the squeaking windows, and the trumpet melody are all part of the performance on air. I regularly heard it only during summer vacations at my grandparents’ houses, since we did not listen to “Jedynka” at home, in Warsaw. I have always liked it, with its overtones of freedom and fun of the summer, with its air of mystery – What was that noise? Who’s walking?


Arise! This is a lovely day
Wake up, wake up with a smile
Give thanks and remember...

It is not clear if Chopin ever heard the Hejnal. He was from Mazowsze and the mazurka, not the krakowiak was close to his heart. When emigrating in 1829, he traveled via Krakow, but without stopping for long, he moved on to Vienna…By that time, the melody was played several times per day.

The best known of Chopin’s Krakowiak’s is Rondo à la Krakowiak in F major, Op. 14 for piano and orchestra. composed in 1828, with quotations from Paganini’s Caprices and  its virtuosity featuring stile brillante ornaments. The "Albosmy to jacy tacy" Krakowiak is quoted here. Stylistically similar is the krakowiak in the last movement of the Concerto in E minor, Op. 11 (written 1830, published 1833), as in the Rondo, it sparkles with stile brillante and youthful bravura. 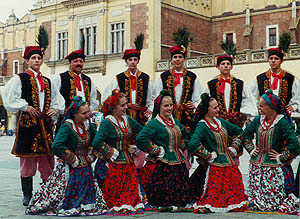 Krakowiak is a Polish dance from the region of Kraków, the old capital of Poland (used by the Piast and the Jagiełło dynasties) and the center of southern part of the country, called Małopolska (Little Poland). The common name used in English is cracovienne (from the French); in German the dance is known as Krakauer Tanz. The term refers to a group of dances from southern and central Małopolska, which are known by their places of origin (proszowiak from Proszów), or by the particular figures used in their choreography. According to the entry in The New Grove Dictionary of Music and Musicians (1980 ed.), "in its origins, the krakowiak seems to be connected with courtship ritual." The dance dates back to the 16th and 17th centuries when it was included in organ and lute tablatures, as well as songbooks, under such titles as Chorea polnica or Polnish Tanz

However, the first time that the name itself appeared in print was in Franciszek Mirecki's 1816 piano album, Krakowiaks Offered to the Women of Poland (Warsaw, 1816). In the mid-19th century, the krakowiak became a popular ballroom dance in Austria and France and grew to be regarded as a "national dance" of Poland (it competed with the polonaise). For Poland, this was the time of partitions and the unsuccessful uprisings (1831, 1848) which sought to regain the country's independence. The krakowiak, polonaise, and even mazurka, appeared in the Parisian salons as symbols of solidarity with the oppressed nation. At the same time, the krakowiak became a choice of composers who transformed it into an extensive and even virtuosic form, beginning from Fryderyk Chopin's Krakowiak (grand rondeau de concert) for piano and orchestra (op. 14, 1828; including a quotation of the popular "Albośmy to jacy tacy"), and including pieces by Zygmunt Noskowski, Ignacy Jan Paderewski, and Roman Statkowski. As the result of this increased artistic stature, even the ballroom form of the dance grew in scope and the dance was transformed into a three-part form, with the music featuring a contrasting central section, and modulations to other keys. 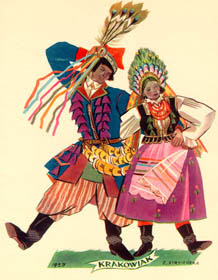 The krakowiak is a fast dance in duple meter; it uses a characteristic syncopated pattern of short-long-short (or eight-note - quarter-note - eight-note) which allows one to recognize the dance form quite easily. Another variant is an eighth-note followed by an accented dotted quarter-note; both are illustrated below:

This pattern alternates with the simpler rhythm of two eighth-notes, plus one quarter-note (or: short-short-long). The phrases are symmetrically arranged in pairs of four measures each, though the texts of songs used in the krakowiak are grouped in four lines of six-syllables each. The melodies feature a great variety of patterns, with added extra notes, dotted rhythms, and passages based on triads.

The great popularity of the krakowiak among the American Polonia has antecedents in its widespread presence in American popular music since mid-19th century. A famous Austrian dancer, Fanny Elssler, presented the Cracovienne for her debut in New York: dressed in red boots, blue shirt, white jacket and velvet cap, she delighted her audiences and secured the position of this dance in the American popular repertoire. Aleksander Janta lists 32 Cracoviennes, 4 songs Cracovian Maid, and 5 Krakowiaks in his inventory of Polish dances composed in the U.S. at that time (A History of Nineteenth Century American-Polish Music, p. 114-124).

The krakowiak is set for several couples, among whom the leading male dancer sings and indicates the steps. According to the description in the New Grove Dictionary of Music and Musicians, the krakowiak is directed by the leading man from the first pair. As they approach the band, "the man, tapping his heels or dancing a few steps, sings a melody from an established repertory with newly improvised words addressed to his partner. The band follows the melody, and the couples move off in file and form a circle (with the leading couple back at the band). Thereafter verses are sung and played in alternation, the couples circulating during the played verses." There are several figures which appear in the different stages of the dance: the invitation phase, the running, the shuffling, the passing, etc. The three most characteristic steps are: the galop (fast running forward), the hołubiec (jump with clicking the heels and stamping; pl. hołubce), and the krzesany (this term is used as a name of a separate dance in the Podhale area, but here refers to a sliding motion of the feet with stomping).

The description of "Krakowiak" is from my entry on this topic on the Polish Dance in California website and in the Polish American Encyclopedia, McFarland, 2011.

The impressions from Krakow and listening to Hejnal appear in brief articles in the Ecomusicology Newsletter and the PAHA Newsletter (Fall 2012).