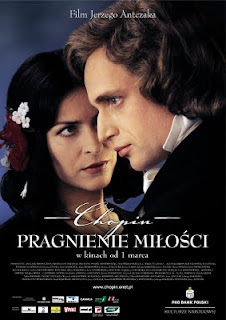 The failure of actors and directors to adequately portray a "genius" composer - be it Beethoven, Mozart or Chopin - speaks to the richness of our collective imagination that creates a mental image of the composer of such complexity and sophistication that it becomes virtually impossible to match it with just one man.

When you see Hugh Grant in Impromptu (1991) do you really think of Chopin? Or is the enchanting persona of the famous actor too large for the composer to humbly fit in? Polish fans of Piotr Adamczyk would adore him in Chopin: Desire for Love (CHopin: Pragnienie Milosci) - but would they see the "real Chopin" in this handsome, healthy youth? His love-interest, George Sand, played with incredible charisma by Danuta Stenka stole the show anyway... At least, this film, directed by Jerzy Antczak and with Jadwiga Baranska as Chopin's mother, is recognized as the most historically accurate depiction of Chopin's life.

Much earlier, Charles Vidor attempt to narrate Chopin's life in A Song to Remember (1945), but the main protagonist in this film, Cornel Wilde, looked more like a gun-slinger from a Western than the sick and feeble Romantic. At least the pianist, Jose Iturbi, gave justice to the music. 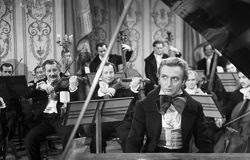 Paradoxically, the most "Chopin-like" of all actors trying to impersonate the extraordinary pianist was Czeslaw Wollejko in The Youth of Chopin (Mlodosc Chopina) directed by Aleksander Ford in 1952. This film does away with the romance that fascinates virtually all other film makers and focuses on the years 1825-1831, Chopin's first European tours, rise to fame, and emigration. Here, the young composer is filled with patriotic zeal; he is tormented at the thought of being unable to return to Poland from Vienna where the news of the 1830 November Uprising reached him. Portraying Chopin as the friend of peasants and workers, the "soul" of the nation in the new Socialist-Realist aesthetics, the film is invaluable to music historians as it contains a unique scene with original Polish folklore performed by villages and not trained dance troupe based on Soviet models. Just for this scene, a crowded wedding dance with furious obereks, the film is worth its weight in gold...

I have to admit here that my knowledge of filmed Chopins is incomplete, since I have never seen the 1934 film by Géza von Bolváry, released in German, Abschiedswalzer: Zwei Frauen um Chopin (Farewell Waltz). The film starred Wolfgang Liebeneiner as Chopin and Sybille Schmitz as George Sand. Recently found and screened in Japan, The Farewell Waltz apparently inspired a famous Japanese film-maker, Kihachiro Kawamoto to create puppets based on the main characters. It is possible that this film added to the incredible popularity of Chopin in Japan - you may see its fragment on the website of Nishikata Film Review.

Thus, we may conclude that there are no successful "Chopin"'s on the screen. How about the music? In contract to the compser, it seems that it has become the perennial favorite of movie-makers, appearing in just about everything, from romantic comedy to period drama, and action movies. I've adapted the table of credits from another website (Music Timeline by Art Sulit) by adding some titles, including the biographies and The Karate Kid that I discussed on this site:

Titles of Chopin's Works - Title of the Film