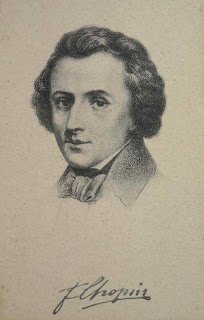 Of all the preludes by Chopin, the one in D-flat Major, op. 28 no. 15, known as the "Raindrop" prelude, has attracted the most attention - among the poets and filmmakers, at least. . . I think it is because it is relatively easy to play; even I could learn it! And I was known in my music-making days as having two left hands on the keyboard. ..

In any case, this sublime melody (or rather, the sostenuto themes appearing in the A-sections of the ABA form) has recently been used in a new sci-fi film by Ridley Scott, "Prometheus." This pre-quel to the alien trilogy, focuses on the attempts of totally evil, poisonous alien creatures, both grossly slimy and supremely intelligent, to take over and destroy humanity.

Apparently, Ridley Scott has loved this melody for a long time and decided to use it both in the film and in the final credits as a symbol of what matters. Chopin's miniature becomes here the most delicate sign of our shared humanity, threatened and attacked by unbearable screeches of the alien life-killing life forms. [An account loosely based on an article in the Los Angeles Times, July 6, 2012]

Let's listen to the Prelude played by pianists who did not have two left hands: 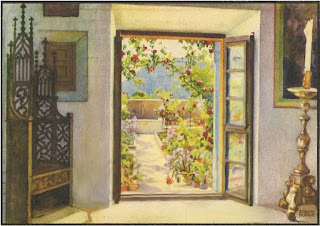 The "Raindrop" Prelude has been surrounded by stories and legends since its creation. Chopin wrote some of it during the fateful stay in the Monastery on the island of Mallorca, the city of Valldemosa in 1834. He got really sick and was suffering from hallucinations, nausea, and fevers. Some modern scholars claim that these were the symptoms of his poisoning with carbon monoxide, from a heater he had in the closed space of the cold cell where he was composing all day.

George Sand wrote in her Histoire de ma vie that Chopin had a very peculiar vision or dream, while playing the piano and working on this prelude:

He saw himself drowned in a lake. Heavy drops of icy water fell in a regular rhythm on his breast, and when I made him listen to the sound of the drops of water indeed falling in rhythm on the roof, he denied having heard it. He was even angry that I should interpret this in terms of imitative sounds. He protested with all his might – and he was right to – against the childishness of such aural imitations. His genius was filled with the mysterious sounds of nature, but transformed into sublime equivalents in musical thought, and not through slavish imitation of the actual external sounds."

Before the cosmic battle of Ridley Scott's aliens, film-makers used the Prelude in a variety of contexts, as listed on Wikipedia by anonymous sribes (thanks for all the work!):


If you know of more ways to "kill" this perfectly beautiful piece of music, let me know...

The Prelude No. 15 has long been a favorite of poets. In the anthology "Chopin with Cherries," there are no fewer than ten poems inspired by or mentioning this particular prelude. Christine Klocek-Lim goes back to the story by George Sand.

The wet day carried rain into night
as he composed alone.
With each note he wept
and music fell on the monastery,
each note a cry for breath
his lungs could barely hold.
Even as his world
dissolved around him
“into a terrible dejection,”
he played that old piano in Valldemosa
until tuberculosis didn’t matter;
until the interminable night
became more than a rainstorm,
more than one man sitting alone
at a piano, waiting
“in a kind of quiet desperation”
for his lover to come home
from Palma.
When Aurore finally returned
“in absolute dark”
she said his “wonderful Prelude,”
resounded on the tiles of the Charterhouse
like “tears falling upon his heart.”
Perhaps she is right.
Or perhaps Chopin “denied
having heard” the raindrops.
Perhaps in the alone
of that torrential night
he created his music simply
to hold himself inside life
for just one note longer.

Another contemporary poet, Carrie Purcell thought about her music lessons...

You have to
my teacher said
think of that note like rain,
steady, but who,
my teacher said
wants to hear only that?
On Majorca in a monastery
incessant coughing
covered by incessant composition
and everywhere dripping
sotto voce
move the rain lower
let it fill the space left in your lungs
let it triumph
We die so often
we don’t call it dying anymore