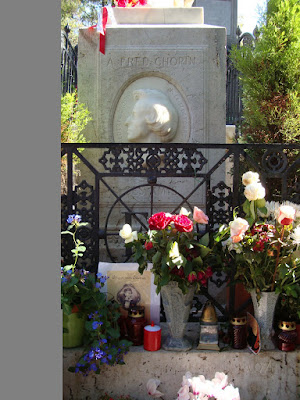 The curiosity about Chopin's death appears almost morbid today, when the cult of fitness and health has placed all disabled and sick on the margins of society. As Franz Liszt writes in his biography of Chopin, the hagiography, rather, setting the tone for the legend of the feeble, tortured body and the elevated, spiritual, noble, suffering mind: "None of those who approached the dying artist, could tear themselves from the spectacle of this great and gifted soul in its hours of mortal anguish." And a spectacle it was. As Liszt claims, Chopin planned things in advance:

"By a custom which still exists, although it is now falling into disuse, the Poles often chose the garments in which they wished to be buried, and which were frequently prepared a long time in advance [...] Chopin, who, although among the first of contemporary artists, had given the fewest concerts, wished, notwithstanding, to be borne to the grave in the clothes which he had worn on such occasions [...] He had linked his love for art and his faith in it with immortality long before the approach of death, and as he robed himself for his long sleep in the grave, he gave, as was customary with him, by a mute symbol, the last touching proof of the conviction he had preserved intact during the whole course of his life. Faithful to himself, he died adoring art in its mystic greatness, its highest revelations." 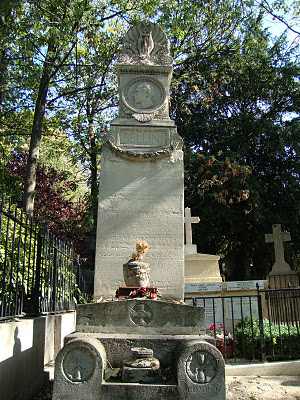 Then, he decided on his burial - the Mozart Requiem at the Church of the Madeleine, the body to be interred at the Parisian cemetery Pere Lachaise, next to Bellini and Cherubini, and the heart, submerged in brandy, carried under the skirts of his sister back to Poland, to be enshrined in a pillar in the Church of the Holy Cross on the Krakowskie Przedmiescie Street in Warsaw, not far from the place where he spent his youth.

Before burial, came Chopin's last days and moments, so fastidiously and admiringly described by Liszt:

"From week to week, and soon from day to day, the cold shadow of death gained upon him. His end was rapidly approaching; his sufferings became more and more intense; his crises grew more frequent, and at each accelerated occurrence, resembled more and more a mortal agony. He retained his presence of mind, his vivid will upon their intermission, until the last; neither losing the precision of his ideas, nor the clear perception of his intentions. The wishes which he expressed in his short moments of respite, evinced the calm solemnity with which he contemplated the approach of death. 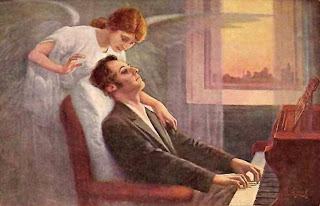 As Liszt had it, everyone was blessed and raised to the heights of a spiritual realm by the very proximity of the dying "seraphic" artist: "—every knee bent—every head bowed—all eyes were heavy with tears—every heart was sad and oppressed—every soul elevated." After the final blessings, the agony began:

"A convulsive sleep lasted until the 17th of October, 1849. The final agony commenced about two o'clock; a cold sweat ran profusely from his brow; after a short drowsiness, he asked, in a voice scarcely audible: "Who is near me?" Being answered, he bent his head to kiss the hand of M. Gutman, who still supported it—while giving this last tender proof of love and gratitude, the soul of the artist left its fragile clay. He died as he had lived—in loving. When the doors of the parlor were opened, his friends threw themselves around the loved corpse, not able to suppress the gush of tears."

To remove the sanctified sheen of Liszt's verbosity let us read what Anne Woodworth wrote about this very moment in her poem published in the Chopin with Cherries anthology:

At the “Hour of Twilight”

Franz will write it all down:
that I swooned, that I asked for flowers
and music. Trouble is, I don’t know any Franz.

Tens of friends waited
in the anti-chamber. Trouble is,
I don’t have even four.

And a student held my hand,
because he wanted to return my affection
except that I’ve never had a student who loved me.

I do have a sister. I have two, but they wouldn’t think
of being prostrate at my bedside.
So who will hold my hand?

Where is a Franz who will unabashedly
describe my pillow? my sweat? my bitter suffering?
the unknown shores where next I go?

Of course, it’s true:
I don’t believe I’m going anywhere,
nowhere beyond nothing, that is.

Sing, Countess. Sing, my compatriot.
Trouble is, I’m not Polish. I don’t know any singers,
at least not one who can attain profound pathos.

And there’s no one to roll the piano I don’t own
to my bedroom door. Oh, Liszt, where are you?
I am coughing so. And the pain . . .

And the love . . .
Where is my Franz who will record
the cliché of a final agony? 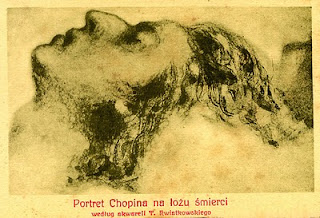 The association of flowers with paying tribute to the dead, so typical of the West, was amplified in Chopin's death chamber: "His love for flowers being well known, they were brought in such quantities the next day, that the bed in which they had placed them, and indeed the whole room, almost disappeared, hidden by their varied and brilliant hues. He seemed to repose in a garden of roses. His face regained its early beauty, its purity of expression, its long unwonted serenity. Calmly—with his youthful loveliness, so long dimmed by bitter suffering, restored by death, he slept among the flowers he loved, the last long and dreamless sleep!"

The flowers are still there, in abundance. I visited his grave at Pere Lachaise Cemetery on October 3, 2011, during a strangely hot Indian Summer day. The tomb was easy to find. That's where everyone was going. The cemetery office distributes maps with notable graves marked, from Heloise and Abelard, to Oscar Wilde, Edith Piaf, and Rossini. But there are no fresh flowers at almost any of them - except at Chopin's. The grave is taken care of by a local Polish Historical Society that decorates it with the national symbols (white eagle on a red flag), and vases for flowers. These are always fresh, brought to the grave by the stream of visitors. About fifty people passed by during the ten minutes we were there. 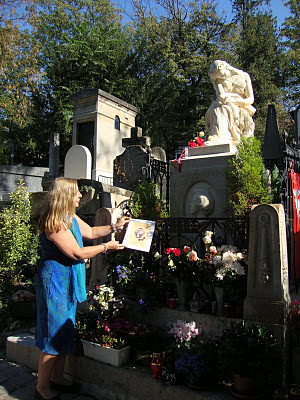 Afterward, I was asked for the location of Chopin's grave five more times on the way out - by an American, a French hobo (visibly drunk), an Italian couple, and a family with teenage kids. Some had flowers to leave at the people's shrine, I brought my poems and a cover of our anthology. I left it there for the grave-keepers to put in a makeshift historical museum, preserving notes, piano keys, and other memorabilia left for Chopin over 150 years after his death.

The intertwined themes of death, mortality and morbidity were associated with Chopin especially strongly at the end of the 19th century and through the early decades of the 20th century. Polish composer Zygmunt Noskowski (1846-1909) elaborated on the topic of the “typically Slavic” feeling of the unspecific, yet overwhelming, “sorrow” (“żal” or “żałość”) and nostalgia permeating Chopin’s music. This overriding expressive tone was associated with a general poetic quality in Noskowski’s 1899 article, “The Essence of Chopin’s Works:”

"Whatever we call the mood in Chopin’s works, be it “elegiac quality,” “longing,” or “sorrowfulness,” it is of primary importance to state that, above all, the purest poetry prevails in them and that the breath of this poetry captures the hearts in a way that cannot be described with words."

Strangely enough, Liszt attempted to do precisely that, "describe the ineffable in words" in his discussions of that most famous, and trivialized of Chopin's pieces, his Funeral March from the Piano Sonata No.

"All that the funeral train of an entire [Polish] nation weeping its own ruin and death can be imagined to feel of desolating woe, of majestic sorrow, wails in the musical ringing of this passing bell, mourns in the tolling of this solemn knell, as it accompanies the mighty escort on its way to the still city of the Dead. The intensity of mystic hope; the devout appeal to superhuman pity, to infinite mercy, to a dread justice, which numbers every cradle and watches every tomb; the exalted resignation which has wreathed so much grief with halos so luminous; the noble endurance of so many disasters with the inspired heroism of Christian martyrs who know not to despair;—resound in this melancholy chant, whose voice of supplication breaks the heart [...] The cry of a nation's anguish mounting to the very throne of God! The appeal of human grief from the lyre of seraphs!"

Seraphs or not seraphs, the music still moves us deeply, still resonates within us, still inspires. The YouTube comments of uneducated teens betray their helplessness under his sway: