Chopin - A Research and Information Guide from Routledge (Vol. 6, No. 4) 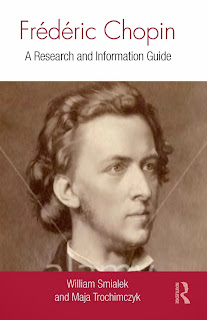 I'm pleased to announce the imminent publication of the second revised edition of Frederic Chopin: A Research and Information Guide, that will be issued by Routledge probably in June 2015.  The work on edits took a while, with a variety of corrections and updates being made. The original Guide, by William Smialek, appeared in 1999, and has long since been out of print. Additionally, there was an explosion in Chopin research in the following 15 years, that called for a complete reorganization of the Guide. The newly reorganized chapters are listed below the preface. The cover is based on a 19th century engraving purporting to portray young and strong Chopin, as Poles wanted him to be, not necessarily as he was... The myth, more important than reality. In Chopin's case: the myth is the reality.

FROM MY PREFACE TO THE SECOND EDITION

Starting a research project about Chopin in the 21st century may be a daunting task, given the overwhelming diversity and number of books, studies, editions, articles, and other resources dedicated to this composer.  Five key fields of Chopin studies have recently witnessed a dramatic growth: manuscript and source studies linked to the chronology of works and compositional process; revisions to his biography based on the expanding knowledge of his milieu; performance studies including computer-assisted analysis of recordings; studies of reception in the context of musical culture; and cultural studies, examining the presence of Chopin’s image, music and myths in popular culture as well as providing unconventional interpretations of his life and work.

The phenomenon of Chopin’s music and life preoccupied music critics and writers for nearly 200 years: the first article was published when the composer was just eight years old, in 1818.  Online catalogs now tell us that there are 2,478 books on Fryderyk Chopin and 6,832 books on Frédéric Chopin in libraries worldwide. This Research and Information Guide organizes a portion of these publications into a manageable scheme of writings that belong to particular traditions or are associated with a specific approach.
The revised Guide includes 1014 references to books, articles, recordings and electronic databases with information about the great composer. In comparison with the first edition, these references are completely renumbered and reorganized, with numerous additions and some replacements.

“Researching Chopin” (Chapter I) starts from reference works and internet resources, but quickly takes readers on a tour of the beginnings (publications to 1914) and the current state of research (conference proceedings and edited volumes from the past three decades). Chopin-specific periodicals are singled-out, along with a scattering of Chopin-themed anniversary issues of various journals. Although the major collections of Chopin letters have long ago been edited and published, recent discoveries have added to the corpus of extant correspondence, and the dating of many letters has been revised (Chapter II). Studies of Chopin’s life (Chapter III) have seen a major expansion, especially in the areas of teaching and performance, but also family genealogy, the circles of his friends, and even the history of his pianos. The Calendar of Chopin’s Life is expanded and corrected, taking into account new biographical discoveries. There is a new List of Works, needed for a quick check of the order of their composition and publication (Chapter IV).

Due to the explosive growth of the number and type of research projects, the studies of works have been divided into two chapters: Manuscripts, Editions and Transcriptions in Chapter IV, and Surveys, Studies and Analyses in Chapter V.  Catalogs and facsimiles of manuscripts are accompanied by research studies; first and early editions now form a separate field; various critical and complete editions are noted. Studies and Analyses (Chapter V) range from general surveys to close readings of individual works, organized by genre, and seen through a variety of lenses, from Schenkerian analysis to narratives, subjectivity, and gender.  Chapter VI, Reception and Performance Studies, brings a dizzying diversity of interpretations of Chopin’s life and work, including appropriations by composers and ideologues, and portrayals by artists, writers, and filmmakers. Like a chameleon, he changes from an effeminate youth; to a sick and dying visionary; to a heroic, patriotic Pole; a sublime spiritual “bard;” or a revolutionary artistic genius.

Studies of performance issues include discussions of Chopin traditions, inherited by generations of students of his students, and portrayals of individual pianists. Instead of an extensive discography, the Guide provides an alphabetic list of names of excellent Chopin pianists, several complete works editions (including a set recorded on period instruments), and a handful of discographies of historical recordings, as well as information where to look for more... The Guide ends with a survey of Chopin societies and institutions providing material support and preserving Chopin documents and artifacts.

While my doctoral dissertation was not about Chopin, or not even the 19th-century, I owe my grounding in Chopin studies to professors at the University of Warsaw, my – and Chopin’s – alma mater: Zofia Helman, Irena Poniatowska, Wojciech Nowik, Maciej Gołąb, and Benjamin Vogel. I’m also grateful to my childhood neighbor, Dr. Zofia Chechlińska of NIFC and the sound of her grand piano filling our suburban streets with Chopin. I would not have become aware of the scope and intensity of expansion in Chopin research, if not for my participation in two International Chopin Congresses in Warsaw (1999 and 2010) that opened my eyes to the richness of new ideas, while I brought my own reception studies and poetry to the table.

I. RESEARCHING CHOPIN
I.A. Entries in Reference Works
I.B. Resources and Bibliographies (including Traditional Bibliographies)
I.C. Books and Studies to 1914
I. D. Collected Essays and Conference Proceedings (Chopin Congresses and Conferences and Essay Collections)
I. F. Chopin in Periodicals (Journals Dedicated to Chopin and Special Issues of Other Journals)

Posted by Maja Trochimczyk at 5:30 PM No comments: