Chopin or Szymanowska? Kocyan's Quiz at the Bowers Museum (Vol. 4, No. 8) 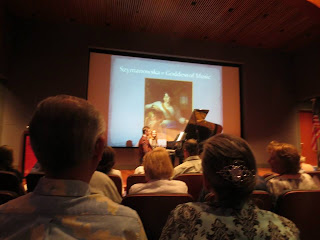 On Sunday, June 30, 2013, at the Bowers Museum in Santa Ana, during a lecture-recital about "Maria Szymanowska, the Court Pianist to the Tsarinas" Wojciech Kocyan let the audience compare and identify the music of Szymanowska, born in 1789 and publishing since 1810 to her death in 1831, and Chopin, born in 1810 and composing since his childhood to 1849. 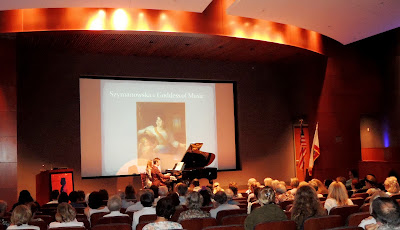 Instead of playing their music in a straightforward piano recital, Kocyan arranged six pieces in pairs, in random order, and asked the audience to identify the composers. To make things harder, the pieces were put in the same, or very similar key. The two pieces in A-Flat major were fast, effervescent, and virtuosic, with melody barely indicated above a web of arpeggios. The two pieces in F Minor were melodic and expressive, poignant event. The pieces in E-flat Major were whimsical, nostalgic, and dance-like - both could actually be danced at an aristocratic salon.

Chopin – Etude in A-flat major, Op. 25 No. 1, known as The Aeolian Harp since Robert Schumann's review in the Neue Zeitschrift fur Musik, composed before 1837, dedicated to Maria d'Agoult.

Szymanowska – http://www.youtube.com/watch?v=mfcmvkbmtygNocturne in A-flat Major “Le Murmure” published in Paris by Henry, with the title on the cover “First Pianist of the Tsarinas of Russia”

Szymanowska – Polonaise in F Minor, no. 4 from the same collection of 18 Dances dedicated to Princess Vyazemsky

Chopin – Waltz in F minor Op.70 No.2, composed in 1841 and dedicated to Elise Gavard and Anna Caroline Oury [de Belleville] in different editions

Chopin – Waltz in E flat Major Op.Posth., composed around 1827 (he most likely heard Szymanowska in Warsaw at that time), played by Biret Idil, from YouTube.

Szymanowska –  Contredanse, pub. 1820 Leipzig, in 18 Dances dedicated to Madame la Vera Viazemsky nee Princesse Gagarin, wife of Prince Pyotr Viazemsky (in 1819-21 he lived in Warsaw, was friends with Pushkin and Mickiewicz), with a quotation from opera Jean de Paris by Pierre Boieldieu.


The audience filled out the answer cards that were collected and counted during the reception. Three books on Szymanowska by Stanislaw Dobrzanski were given to three winners randomly chosen from among 20 listeners who gave correct answers. The lecture recital was attended by about 140 people, so the proportion of correct answers was about 14%, which means that the majority of listeners mistook Chopin for Szymanowska and Szymanowska for Chopin. This indicates the similarity of their compositional styles.


To make things harder, Kocyan, who just learned the Szymanowska pieces for this event, but has played Chopin for his entire career, that started with an award in the Warsaw Chopin Competition, decided to not play from memory, but rather use scores, without clearly visible names on the covers, so that the pieces would be identified solely by ear.

As a bonus, the wonderful and witty pianist, selected a piece that grew a collective "aah" from the expectant audience just after two chords. Everyone recognized Chopin's Waltz in C-Sharp Minor Op. 64 No. 2, composed in 1846-47, dedicated to Charlotte de Rotschild and beloved by generations. 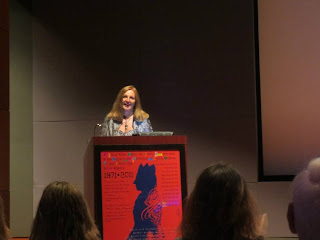 The event started with my lecture on "Fashion, Portraits and Szymanowska's Professional Image" richly illustrated with portraits of the virtuoso pianist, teacher of princesses, and composer of romantic music, endowed with rich melodic invention and a talent for filigree ornamentation, and expressive harmonic progressions. Certain cadences, motives, textures, and melodies in "Chopin's style" pointed to an inspiration or a shared language of the era that is now forgotten, since we only remember Chopin. The poster by the lectern by Janusz Majewski of Poland celebrates another Queen of Polish culture - Helena Modjeska (Modrzejewska), an actress and director, and the patron of the Modjeska Club that sponsored the event. 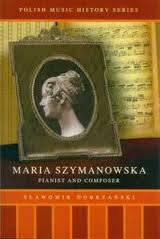 To learn more about Szymanowska, the audience could buy a book published in 2006 by the Polish Music Center, with a CD insert by Dobrzanski. The book is a result of Dobrzanski's doctoral studies (he's now a piano professor in Kansas) and includes my chapter on Szymanowska's songs.

To learn more about Szymanowska's music I recommend the purchase of her Complete Piano Works, issued by Acte Prealable in Poland this spring, and recorded on three CDs by Slawomir Dobrzanski (AB 181-83). This is a "must-have" set and hopefully some of these recordings will become available for download individually, starting from Szymanowska's greatest hit - her Nocturne "Le Murmure" which was used by Adam Mickiewicz as an accompaniment to poetic improvisations back in her salon in St. Petersburg. There are no excerpts from the CD set available online, but her two Nocturnes have been posted: 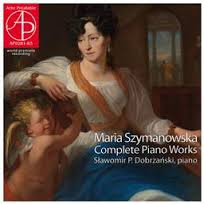 The picture on Dobrzanski's CD is the same as the one towering above the performers in the auditorium: Szymanowska styled as a Roman Goddess and placed at a piano, with a putto handing her the book of music, to indicate angelic inspiration, in a exquisite evening gown and elegant interior, with a window pointing at the smoking peak of Vesuvius. Walenty Wankowicz painted Szymanowska in Naples, where she played for the Russian Ambassador on January 19, 1825 and socialized with Princess Natalia Golitzin, one of her closes friends and supporters.


Pictures were taken by Maria Kubal and Kathabela Wilson, poet, musician, and artist. The audience included also Prof. Roman Koropeckyj of UCLA, a noted specialist in Mickiewicz, Dr. Mira Mataric, Serbian-American poet and translator, and Susan Dobay, Hungarian-American artist. extraordinaire. Barri Mogilewsky (married to a Polish-American, hence the name), represented the Bowers Museum and coordinated the afternoon, whereas Andrew Z. Dowen, President of the Modjeska Club, represented the Club and coordinated the reception.

To see more pictures from the event, visit the Picasa Album: https://picasaweb.google.com/Maja.Trochimczyk/KocyanAndTrochimczykOnSzymanowska#

Posted by Maja Trochimczyk at 8:38 AM No comments: