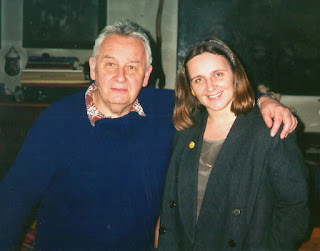 Amidst so much propaganda and deception all around us, it is time for return to reality. Time for Chopin. Except that my current book project is "Gorecki in Context: Essays on Music" - a project I started in 2011 and finally decided to complete - so I'm busily editing the composer's interviews and translating studies of his symphonies and other works... This leaves me preciously little time for Chopin, or poetry, or anything else that is not Henryk Mikolaj Gorecki (1933-2010)...

But, we should know that Chopin was Gorecki's first favorite composer, and his first purchases of music scores were: Karol Szymanowski's Mazurkas, Chopin's Impromptus, and Beethoven's Ninth Symphony.  He also loved using "secret quotes" - fragments of music so short that they were distilled to their essence. Just two chords from Chopin's Mazurka Op. 17, No. 4 appear in the second movement of Gorecki's Third Symphony... Just two chords...

https://www.youtube.com/watch?v=idbaPu1gDPg (Chopin by Artur Rubinstein, with an ad, alas)

http://en.chopin.nifc.pl/chopin/composition/detail/id/179 (Chopin from NIFC, with recordings, too)

https://en.wikipedia.org/wiki/Symphony_No._3_(G%C3%B3recki)  (with links to recordings)

I had published Chopin-related fragments of my 1998 interview with Gorecki, where he was excitedly sharing his delight with the study by Jan Wecowski claiming that all Chopin's music is rooted in Polish religious folk song. (Inspired by Gorecki's enthusiasm I published the article in the Polish Music Journal). Now that far-fetched study delighted Gorecki so much because that is what HE was doing, reaching to the tradition of faith, the prosody of Polish language, the simple melodies distilled through centuries, remembered and sung... He entitled his Third String Quartet "... songs are sung" - taking a line from a Polish translation of a Russian poem by Velimir Khlebnikov.

And we all know how many songs and choral songs Gorecki has composed. Even symphonies with voices!

It is because "songs that are sung" were so important to Gorecki that he wanted passionately to believe that Wecowski was right and that Chopin's music came straight from religious folk-song tradition of Poland. Yet, I find this theory a far-fetched one, as distant  from fact as the theory grounding Chopin's flowing melodies in the tradition of Bel Canto and the operas of Bellini.  The singing voice on the piano, the singing voice in the orchestra. Yes, of course, all great music is song, song of praise. But still...What is beyond any doubt whatsoever, is the impact of folklore on Gorecki's own music. His fascination with the "gorale" folk ensembles of the Podhale area, in the foothills of the Tatra Mountains. Look how he plays the second fiddle in an ad-hoc "kapela" formed to celebrate the 50th anniversary of the "Tatra Eagle" published by Thaddeus Gromada and Jane Kedron in New Jersey...  It is not easy for him to sit in the chair like this, with his bad leg and damaged hip... 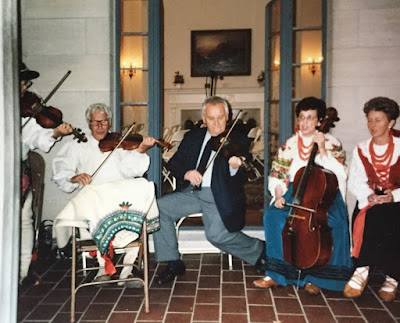 If you know Gorecki's string quartets, especially the first and second one, you'll know what the goralska kapela sounds like... Chopin's music simply does not have that rough, intense quality of the mountain folklore...

So instead of spending time in the mountains, let's visit an aristocratic palace, in my poem about Leonardo da Vinci's portrait of "The Lady with an Ermine:"
http://www.maryevans.com/poetryblog.php?post_id=7032.
I was inspired to send it in to Mary Evans Picture Library - Poems and Pictures Blog, after seeing the Leonardo poem by Lois P. Jones on the same website:  http://www.maryevans.com/poetryblog.php?post_id=6852 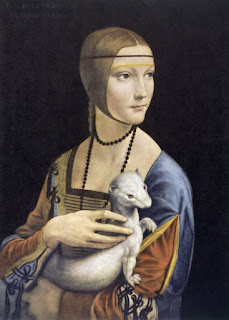 Lady with an Ermine, Cecilia Gallerani, by Leonardo

Lady with an Ermine

after Leonardo da Vinci’s portrait of Cecilia Gallerani,
in the Czartoryski Museum in Krakow, Poland


Her eyes follow me around the room
with that secretive smile she shares
with her famous cousin.

Filled with the knowledge of what was, what will be
she slowly caresses the smooth warm ermine fur.

Leonardo’s brush made a space for her to inhabit,
a grey-blue sky painted black much later –
she was pregnant, her son – a Sforza bastard,
the white ermine – the emblem of her Duke.

Sheltered by Polish royalty, she revealed
her charms only to their closest confidantes.
In 1830, exiled in a precious wood box, to Paris,
In 1919, returned to taste the Polish freedom.

In 1939, hidden again, found by the Nazis
for Hitler’s last dream, the Linz Führermuseum,
Art among red flags and swastikas, flourishing
in the dark cavern of his mind. Never built.

Back home in Krakow, she is safe
in the recess of a museum wall. Under a muted spotlight,
Children play a game: walk briskly from right to left,
don’t let your eyes leave her eyes, see how she is watching you.

Her eyes follow me around the room
Filled with the knowledge of what was, what will be
she slowly caresses the smooth warm ermine fur.
She knows that I know that she knows.


* Tesoro, amore mio, sii tranquillo, ti amo – fragment of a love letter in Italian, “Sweetheart, my love, be quiet, I love you”

What Chopin's work would fit with this renaissance portrait? So much more beautiful than Mona Lisa? His music shared her fate during WWII, banned from public performances by the Nazis, it was played in home recitals, and kept the flame of resistance alive...

Perhaps, it is time for the Barcarolle, Op. 60, since it celebrates Italian music and Lady Cecilia was Italian. Young Krystian Zimerman plays the Barcarolle for a Polish TV recording, looking a bit like Obi Wan Kenobi... and as inspired as a Jedi master...

Let me round out my summer musings then, with summer poetry.  Recently, I had the honor of having three poems included in the anthology dedicated to the great painter, Vincent van Gogh: Resurrection of a Sunflower.  Paperback issued by Pski's Porch Publishing  and edited by Catfish McDaris  with Marc Pietrzykowski, the anthology of 546 pages includes hundreds of poems inspired by van Gogh's art. 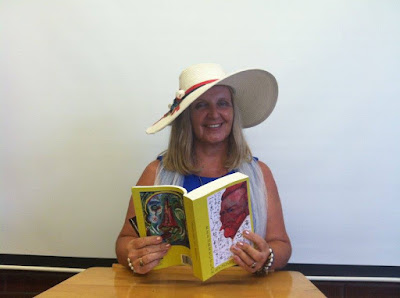 One of my poems was later revised and posted on Mary Evans Picture Library - Poems and Paintings blog, to accompany the image that inspired it: here's "Azure" and van Gogh's "La Siesta."  It is hard to find more vibrant blues, azures, and sunny yellows than on this painting. The original is at d'Orsay Musee in Paris. 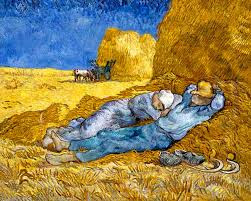 The harvest noon – the sun’s polished
disc above broad fields of yellow.
Half of the day’s work is done.
She falls asleep, curled by his side.
He stretches up, thinking of the bread
slices they’ll butter for children.
Tired by the richness of wheat, they rest,
two pieces in a puzzle of ancient wisdom.

Solemn among rolling waves of wheat ocean
she had picked the first stems, a fistful,
pleated into a figurine, placed high on the fence
overlooking the fields. She learned it

from her mother, her mother before her.
Mother before mother, back to that first
handful of grain, droplets of milk and honey
spilled in an offering to the Goddess.
After measured strides of the harvest
working in consort under the sky’s eye,
wide open in the expanse of the azure –
they breathe the earthy scent of the grain.

Noon rays dance on the dry straw
silenced by the blades of their sickles.
They moved together, they rest together –
blessed by the white gold of silence.

What Chopin piece would fit with this lovely, languid and luxurious siesta? Perhaps his Berceuse, Op. 57? A lullaby for tired harvesters... Here are several version strung out into a sequence on YouTube:

While it is not specific to Chopin's music or any music, in fact, the Great American Eclipse will be seen from just about everywhere in North America, and thus, it is worthy of our attention. Here are the maps of the pathway from NASA. It will happen in the morning, with the total eclipse as outlined, lasting for one or two minutes and racing through space, and the partial eclipse seen as indicated on the globe and map... 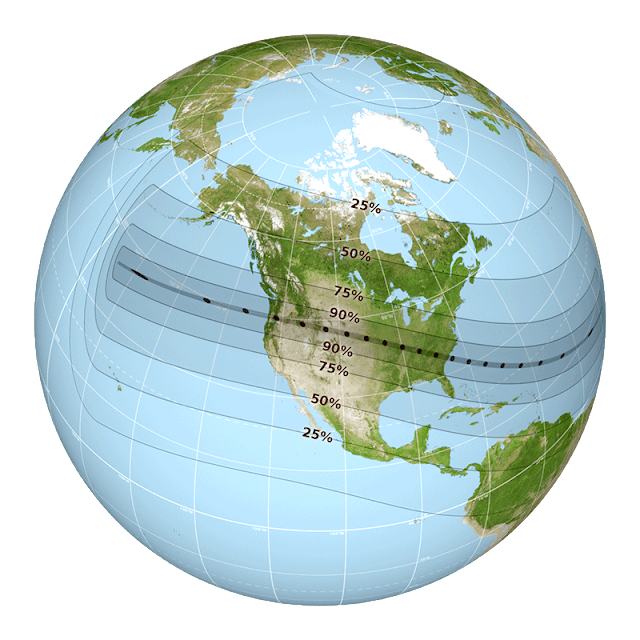 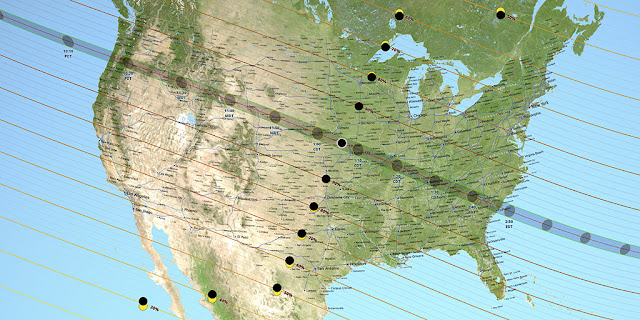 Posted by Maja Trochimczyk at 12:04 PM No comments: