Szymanowska and Chopin at the Bowers Museum, Santa Ana (Vol. 4, No. 7)

On June 30 at 1:30 p.m. at the Norma Kershaw Auditorium of the Bowers Museum in Santa Ana (2002 N Main St, Santa Ana, CA 92706; tel. 714 567 3600) I will present a lecture about "Maria Szymanowska - Court Pianist to the Tsarinas" and pianist Wojciech Kocyan will play piano music by Szymanowska and Chopin. This lecture performance is one of the events associated with an exhibit The Tsar's Cabinet: Two Hundred Years of Decorative Arts Under the Romanovs on display at the Bowers Museum through the summer. The event will be sponsored by the Helena Modjeska Arts and Culture Club, with a small reception to follow. Books about Szymanowska by Slawomir Dobrzanski and a CD set with all of her piano music recorded by Dobrzanski in Poland will be available for purchase at the event.

The lecture will be richly illustrated with portraits of Szymanowska and European nobility, while the musical performance will bring her sound world to life, under the masterful fingers of Prof. Kocyan.  He will juxtapose Szymanowska's nocturnes and etudes with smaller works by Chopin, especially his waltzes - created for the same world of aristocratic salons that were inhabited by Szymanowska. The presentation is loosely based on my paper, read at the International Szymanowska Symposium in Paris, and published in the Annales de Centre de Academie Scientifique Polonaise a Paris, in 2012. 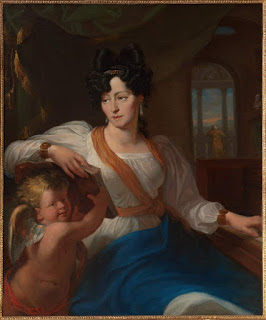 On Fashion, Portraits, and the Professional Image of Maria Szymanowska (1789-1831)


Fashion choices of classical musicians have recently attracted the interest of Mary E. Davis (Classic Chic, 2006). I bring this topic to the biography of Maria Szymanowska (1789-1831), a Polish pianist-composer who after her 1810 Parisian debut toured Europe in 1822-1826 before settling in St. Petersburg for the rest of her short life. A daughter of a Warsaw brewer, and a divorced mother of three (daughters Celina and Helena, and son Romuald), Szymanowska was able to ascend to an elevated position of the Court Pianist of the Tsarinas, and support her extended family with her music (i.e., concertizing and teaching children from aristocratic families). The pianist’s career benefited from ability to shape her “professional image” as a high-society lady of elegance and multiple talents. My project builds on the research of Anne Schwartz (2009), Sławomir Dobrzański (2007), and Benjamin Vogel (2012) that focused on Szymanowska’s talents as a savvy businesswoman and a musician with a love for English pianos. Through an analysis of her portraits by French and Polish artists (Henri Benner, Nicolas Jacques, Aleksander Chodkiewicz, Józef Oleszkiewicz, Aleksander Kokular, and Walenty Wańkowicz) revealing Szymanowska’s personal image and her fashion choices, I demonstrate that in this pianist we encounter one of the earliest instances of “professional image-making” (term from Laura Morgan Roberts, 2005).


Szymanowska created her positive image through “impression management” and “social re-categorization”- shifting the attention away from her humble roots to her preferred aristocratic milieu. The means for this transformation included appearance (clothing, hairstyles, and jewelry), carefully cultivated social networks, and virtuous conduct befitting a single mother of three, a teacher of princesses and nobles. The pianist was exposed to the attire of the nobility as a performer in aristocratic salons in Warsaw (in 1805-1806; 1812, 1823, 1827, and 1828), Paris (in 1810, 1824, 1825, and 1826), London (in 1818, 1824, 1825, and 1926), and St. Petersburg (in 1820, 1822, 1827, and 1828-31). The portraits provide an opportunity to compare her white muslin gowns, shawls, turbans, double sleeves, and jeweled belts with the predominant and changing French, Polish, English and Russian fashions of her time, including those of her mentors – Countess Zofia Zamojska, Duchess Maria Czartoryska Wirtemberg, and Empress Alexandra Feodorovna – as well as Queen Hortense, Duchess Laura Junot d’Abrantes, and Madame de Stael, among others.

The striking features of portraits by Kokular and Wańkowicz, both painted in Italy in 1825, point to a possible artistic “Agon” of the two artists who envisioned the pianist as a Queen of Tones in Rome (Kokular, the phrase was coined by Adam Mickiewicz) and a mythological goddess in Naples (Wańkowicz), thus furthering her elevated professional and social status. The ramifications of Szymanowska’s image creation that helped her to become a teacher and a role model for daughters of Russian aristocracy touch upon the concepts of “female genius” and “modesty” (the preferred virtue of society women in the early 19th century). The research for this paper, conducted at the Muzeum Literatury in Warsaw, Poland and Bibliothèque Polonaise in Paris was supported by Maria Szymanowska Society in Paris.
﻿
WOJCIECH KOCYAN
﻿
﻿
﻿Wojciech Kocyan was praised for his “highly distinctive performances (…) superb, intelligent artistry (…)” (ClassicsToday.com) and “incisive temperament, impeccable technique and sumptuous tone” (Le Monde de la Musique.). He was born in Poland. He studied with two of the world’s most esteemed piano pedagogues: Andrzej Jasinski in Poland, where he received his Masters Degree and with John Perry at the University of Southern California, where he received a Doctor of Musical Arts Degree.

In September 2007 the Gramophone magazine, published in London and considered the world’s most prestigious classical music journal, chose Mr. Kocyan’s recording of Prokofiev, Scriabin and Rachmaninoff as one of 50 best classical recordings ever made, alongside recordings of such luminaries as Leonard Bernstein, Dietrich Fisher-Dieskau, Nicolaus Harnoncourt and Arthur Rubinstein. It also featured the cover headline “The genius of Wojciech Kocyan”. His latest CD, of music by Robert Schumann was released in June 2012.

Dr. Kocyan is much in demand as an adjudicator and lecturer. He has been invited to give masterclasses in France, Hungary, Austria, Poland, Mexico and the United States, including such prestigious venues as the Colburn School. He is the Artistic Director of the Paderewski Music Society in Los Angeles and the Artistic Director of the American Paderewski Piano Competition in Los Angeles.
﻿﻿

Posted by Maja Trochimczyk at 4:41 PM No comments: