Time for Christmas, again...and time to remember "Lulajze, Jezuniu" - the beloved Christmas lullaby that Chopin quoted in his first Scherzo, Op. 20 in B Minor, while staying in Vienna after leaving Poland forever in 1830. The drama of the November uprising and the distance from his beloved family, coupled with anxiety and a foreboding of no return, put the young composer in an emotional turmoil, expressed most poignantly in his famous Stuttgart Diaries.

Like the private journal entries, the Scherzo provides an outlet for outpouring of emotion and is permeated with flights of desperation. The sweet lullaby provides a moment of serenity in the midst of this emotional onslaught. It is a symbol of tranquility of home and familial love that, as Chopin felt in 1830, may have been lost forever...

And you, dear Mommy, comfort him now

Hush, our beautiful cherub so sweet
Hush, our graceful bloom of the world
Hush, Little Jesus, hush, do not cry
And you, dear Mommy, comfort him now 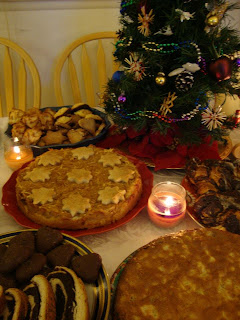 Poles around the world celebrate the beloved holiday starting on Christmas Eve, with a formal "Wigilia" dinner, that though sumptuous and featuring 12 different dishes, like the 12 apostles, is supposedly a "fasting" meal, without meat or meat products. When the first star is seen on the horizon, families sit down to a dinner with one empty place setting left for Divine Presence, or an uninvited guest who might show up on the doorstep on this most holy of nights.

Polish composers of carols and Nativity-themed polyphonic music in the Middle Ages and the Renaissance included Cyprian Bazylik (1535-1591), the author of "Mądrość Ojca Wszechmocnego" (the Wisdom of the Almighty Father). Wacław z Szamotul (or Szamotulski), Wacław of Szamotuły (Venceslaus Samotulinus, Schamotulinus, Samotulius, 1520-1560) wrote a carol, Pieśń o narodzeniu Pańskim (Song about the Lord's Birth) among many sophisticated polyphonic compositions. Mikołaj Zielenski (1550?-after 1616) composed magnificent, large-scale polychoral pieces that have little in common with the humble carols, except the sentiment of praising the birth of Christ ("Adoramus Te") and the love of his dedicated Mother ("Magnificat" and "O Gloriosa Domina"). 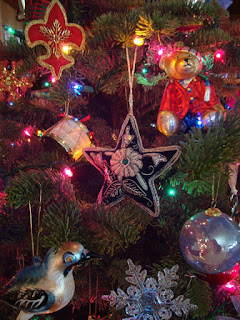 The dinner on a white tablecloth covering a bit of hay, starts with sharing best wishes for the next year, breaking a white rectangular wafer called "oplatek" and with the Christmas carol, "Wsrod nocnej ciszy..." (In the Silence of the Night). The dishes include pickled herring, pumpernickel, kapusta wigilijna (sourkraut stewed with dried mushrooms, prunes, and raisins), various mushroom and fish dishes, beet soup with mushroom-stuffed pierogi and "uszka" (mini-pasta), a variety of gingerbread, shortbread, and poppy-seed desserts, and "kompot wigilijny" (a compote made with several kinds of dried fruit).

The Polish Christmas carols provide a unique soundtrack to this celebration and having these carols along with early Polish music provides an unforgettable atmosphere at the Wigilia table. "Lulajze, Jezuniu" (Hush, little Jesus), though dating back to the 17th century, is not the oldest Polish carol. It belongs among a genre especially popular in Poland, that of tranquil Christmas lullabies, that include also "Gdy sliczna Panna" (When the Lovely Virgin), "Jezus Malusienki" (The Tiny Baby Jesus), "Mizerna cicha stajenka licha" (The Poor, Still, Humble barn), and "Oj Maluski" (Oh, the Tiny One), the latter one in the "gorale" dialect of the foothills of Tatra Mountains.

Songs about Nativity retelling the various stories from the Gospels, have been sung since the introduction of Christianity to the kingdom; and rose in popularity in the 15th century, thanks to the efforts of Franciscans following in the footsteps of St. Francis of Assisi who made the first Nativity Scene and wrote several carols.

In Poland, Christmas-themed songs are divided into koledy (carols) and pastoralki (shepherd's songs), the latter with humorous or sentimental texts bringing the Nativity home to poor shepherds of Polish villages. The word "koleda" comes from the Latin Calendae, the "first day of the month".

"W Zlobie Lezy" (He Lies in a Manger), dating back to the fifteenth century, is one of the earliest Polonaises. Its text is attributed to the Polish Jesuit and famous patriotic preacher, Piotr Skarga, while the melody resembles the coronation polonaise of King Wladyslaw IV Waza.  The most famous of Polish carols - Polonaises is the magnificent "Bog Sie Rodzi" (God is Born), with text by Franciszek Karpinski dating back to 1792 and the melody reputedly used for the coronation of Polish kings back in the 16th century. These two Polonaises and "Lulajze Jezuniu," as well as many other Polish carols are in a lilting triple meter that suffuses Polish folklore with its characteristic flowing and graceful rhythm.

Not all the carols are in triple meter, of course. Here's a stately "march" about the angel and the shepherds: 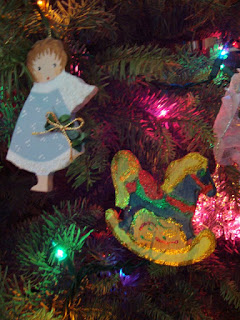 Other earliest koledy were based on Latin melodies with texts adapted into Polish. "Chwalmyż wszyscy z weselem" (Let Us All Praise with Joy) and "Pieśń o narodzeniu Pańskim" (Song about the Lord's Birth) were both based on the melody of the Latin "Dies est laetitiae." The Polish carol "Ojca niebieskiego" (Of Heavenly Father's) used a melody known in the whole Europe. "Dzieciątko dostojne z błogosławionej Dziewice Maryjej" (The Honourable Child From Blessed Virgin Mary) was based on Latin carol "Salve parvule." "Narodził się nam dziś niebieski" (Today, the Heavenly Lord was born unto us) was a version of medieval "Angelus Domini ad pastores." "To-ć czas wdzięczny przyszedł" (A Graceful Time Has Come) was a variant of the Latin hymn of praise of angels, "Ave hierarchia."


We should not forget the "Melodie na Psałterz Polski" (Melodies to Polish Psalter), a pearl of Polish Renaissance music by the Protestant Mikołaj Gomółka (1535 - 1591?), though these lovely pieces are not carols at all... A very popular evening prayer by Waclaw of Szamotuly, "Juz sie zmierzcha" (Already it is Dusk) inspired Henryk Mikolaj Gorecki (1933-2010) to write his first String Quartet, extensively quoting from the tranquil Renaissance melody. 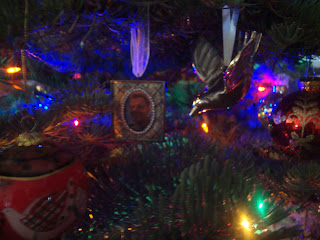 Stanislaw Niewiadomski (1859-1936), Feliks Nowowiejski (1887-1946), and Stanislaw Wiechowicz (1893-1963) made choral arrangement of Polish traditional carols that are popular until today. In 1946, in newly "liberated" and completely devastated Poland, Witold Lutosławski (1913-1994) made an arrangement of "Dwadzieścia kolęd" (Twenty Carols) for voice and piano. Forty years later, in 1984-89, he arranged these carols for soprano, female choir and chamber orchestra; this version often graces the concert stages around the world.

Henryk Mikolaj Gorecki used echoes of "Silent Night" in the ending of his String Quartet no. 2 (1991). Krzysztof Penderecki (b. 1933) extensively quotes "Silent Night" in his Second Symphony, subtitled the Christmas Symphony and marking his return to neo-Romanticism after cutting-edge experiments of the earlier years.


There are many more Polish carol settings by classical composers, and multiple versions of carols by popular musicians, including even such giants of Polish jazz as Urszula Dudziak, or of Polish rock as Slawomir Krajewski (who wrote several carols to texts by Agnieszka Osiecka that became classics in their own right).

More in-depth studies and comments on Polish music may be found on the blog of Prof. Adrian Thomas,
"On Polish music and other Polish topics."

For a study of "Religious Folklore in Chopin's Music" by Jan Wecowski, including the incipit of the "Lulajze Jezuniu" carol copied above, see the article in the Polish Music Journal of 1999.

Academic studies of Polish carols include: Polskie kolędy i pastorałki by Anna Szweykowska (Krakow: PWM Edition, 1985), in Polish, out of print.