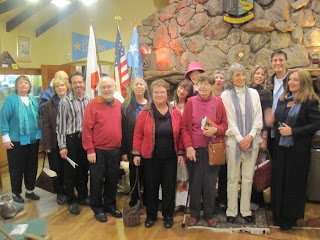 "Strangely my interest in Chopin began with a non-interest in Chopin. I’d always wondered what the hoopla was all about. That changed one evening in Krakow when my husband and I attended an all Chopin concert. That night I heard Chopin. Oh! “An American Hears Chopin,” a poem in CHOPIN WITH CHERRIES, tries to convey the experience." 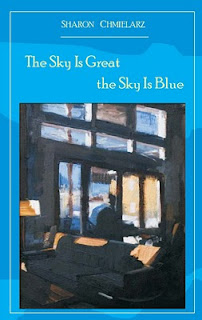 "It was my husband Tad (Tadeusz), a refugee after WWII, who introduced me to classical music. I’d skirted its edges before, but with him I listened. It was a gift he gave when he was alive and which I treasure."

"I love music, but poetry is my thing. I have two new books out, CALLING and THE SKY IS GREAT THE SKY IS BLUE. Each has a few poems about music or musicians, place/ travel, history, women. I had a chance to read from them in Ventura and Tujunga. It was a great trip, especially after months of winter in Minnesota; to California, a parallel universe of ice and snow."

One of Chmielarz's contributions to the Chopin with Cherries anthology, entitled "Chopin: Apples" was recognized by a Pushcart Prize nomination for the year 2010.

And what country hasn’t he lived in,
his music chilling the listener’s arms?

And when haven’t his glissandos
spilled over history, the colossus

that upsets lives like apple carts?
Apples rolling over cobbles.

God-fall we think,
finding among the bruised,

a handful of sweet apples.
The easy thank you is listening

to someone playing at a window
in Warsaw, turning the rumble

sitting beside him at the keyboard.
Her “angel.” His music, his wings.


We could hear that poem during the Chopin with Cherries reading at the Chopin & Paderewski 2010 conference held at the Loyola University Chicago in November 2010. Chmielarz appeared as a member of a group of poets, with Kathabela Wilson, Katrin Talbot, George Bodmer, and others. 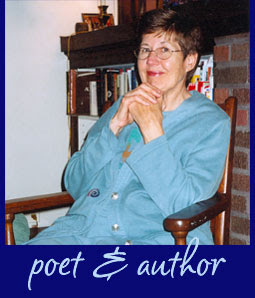 Sharon Chmielarz's books include Different Arrangements, But I Won’t Go Out in a Boat, The Other Mozart (made recently into a two-part opera) and The Rhubarb King. She’s had poems published in magazines like The Iowa Review, Prairie Schooner, The Laurel Review, The Hudson Review, Water~Stone, Great River Review, North Dakota Quarterly, Salmagundi and many others. She’s had one chapbook published, A Stranger in Her House. Two new books of poems are forthcoming from Loonfeather Press and Whistling Shade Press.

More information about her may be found on her website: www.sharonchmielarz.com

Group photo from Village Poets Reading at Bolton Hall Museum, Tujunga, February 27, 2011. Sharon is in a red sweater in the front row, surrounded by other poets.
Posted by Maja Trochimczyk at 9:47 PM No comments: 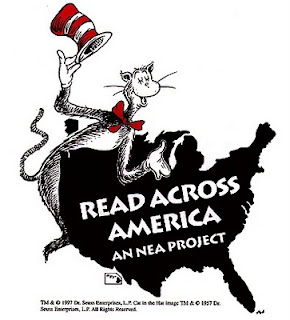 On March 4, 2011, during the national "Read Across America" celebration, Chopin with Cherries found its way to Pacoima Charter Elementary School in Pacoima, California. As a volunteer reader, I decided to introduce California children (most of whom were Latino, speaking English as a second language) to the beauty of poetry. The readings were illustrated with Chopin's music from a CD of preludes and a PowerPoint presentation with the poems and illustrations from vintage postcards published in the book.

While having a guest in the classroom is always attractive and I did several guest readings in various schools already, so I was happy to face this young audience, the Chopin material had its challenges. It was potentially too "high-brow" for children who - most likely - have never heard a piece of classical music (apart from TV commercials), nor attended a piano recital, nor read a poem.

I thought I would give them a glimpse of the role of art and music in Polish culture. What do they do in the evening? "Watch TV!" - was the unanimous answer. What could Polish people do in the 19th century, when they had no TV, no radio, no phones, and no electricity? They could listen to the piano, like the man in the postcard of an evening in a salon. 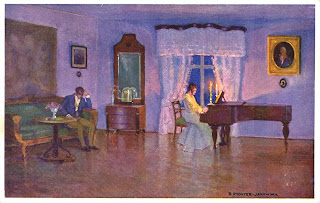 The image of an elegant musician in a long gown, playing by candle light was a good introduction to Kerri's Buckley poem, Ruby and Sapphire. Just in case, I asked if the children knew what "rubies" and "sapphires" were - most of them did not. I also brought a silk scarf to illustrate the elegance of the noble ladies listening to Chopin playing the piano in a romantic salon.

Waxed paper cones, shiny as diamonds, as pearls,
and the music — notes one breathes in, holds fully

So it might never
be forgotten, sound of richness, of ruby, of sapphire,

Elegant nod to all refined things,
to the ivory on a piano key, thrown from a window

Into a golden glitter of leaves by Russian soldiers 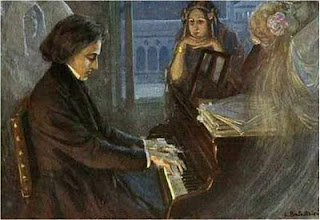 The destruction of Chopin’s piano occurred during one of the battles in the tumultuous period after the January Uprising in 1863, when Russian soldiers ravaged a Warsaw palace where the piano was housed and threw the historic instrument out of the window. This moment became a symbol of savage destruction of beauty by violence, the polar opposition of art and war. References to this symbolic brutality appear in three other poems in Chopin with Cherries: by Charles Adés Fishman, Leonard Kress, and Cyprian Kamil Norwid (in Kress's translation).

Both groups of children were responsive to the idea of music;s association with peace, beauty, and inspiration, especially that they could hear such inspired sounds right then and there. The fifth-graders also heard poems by Nils Peterson (After Listening to all the Preludes and my A Study with Cherries and the second-graders were introduced to Maxine R. Syjuco's humorous and surreal Chewing Chopin.

The centerpiece of both presentations was the poem about my village childhood, Harvesting Chopin. I thought that these first-generation Angelenos would be spending their summers abroad, with their grandparents, living ten months here and two months in a different world, different culture. A show of hands confirmed my assumption. I, too, used to spend my school years in a big city, Warsaw, and the summer vacations in two distant villages of my grandparents: Bielewicze of the Belarussian Grandma, Nina Trochimczyk, and Trzebieszow of the Polish Marianna and Stanislaw Wajszczuk. 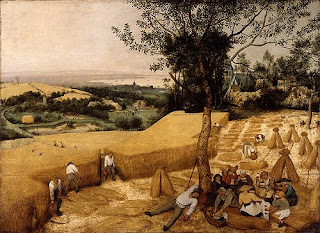 I thought it would be interesting for the children to hear about life on a Polish farm in the 1960s and 1970s, without running water and heavy machinery to harvest the fields of rye or wheat. The harvesting technology there did not change in a thousand years, until the rise of the machines. (The illustration, "The Harvesters" by Pieter Brueghel The Eldest is from 16th century Netherlands; the harvest technology and tools were the same four hundred years later in Poland).

While describing the harvesting scene, I drew pictures of a rake and a scythe. The latter one was greeted with smiles of recognition: "That belongs to the Grim Reaper" - the children said. "Reaper" means "harvester" - I explained,finding a connection between American Halloween and Polish village customs. There is one huge difference, though, in my youth Chopin's music could be heard daily on radio broadcasts reaching the whole country. Is there any music that all of them know as well as we knew Chopin then? I did not ask that question. The answer would have been too obvious.

The straw was too prickly,
the sunlight too bright,
my small hands too sweaty
to hold the wooden rake
my uncle carved for me.
I cried on the field of stubble;
stems fell under his scythe.

I was four and had to work –
Grandma said – no work no food.
How cruel! I longed for
the noon’s short shadows
when I’d quench my thirst
with cold water, taste
the freshly-baked rye bread

sweetened by the strands
of music wafting from
the kitchen window.
Distant scent of mazurkas
floated above the harvesters
dressed in white, long-sleeved shirts
to honor the bread in the making

The dance of homecoming
and sorrow – that’s what
Chopin was in the golden air
above the fields of Bielewicze
where children had to earn their right
to rest in the daily dose of the piano –
too pretty, too prickly, too bright

Photograph of "The Harvesters" by Pieter Breughel the Elder from Wikimedia Commons, postcards of Chopin at the piano and a romantic salon from Chopin with Cherries. Poems published in Chopin with Cherries (Moonrise Press, 2010), copyright of the authors.
Posted by Maja Trochimczyk at 9:01 PM No comments: