One Hundred Years of Musical Emigration - A New Kind of Biographical Dictionary (Vol. 10, no. 1) 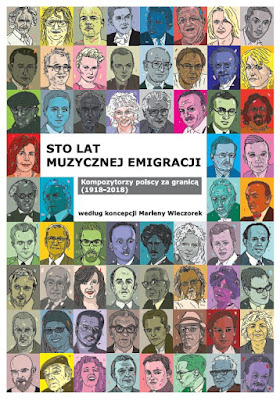 Do we think "exile" or "emigre" when we think of Chopin? Probably... Poland's "national" composer spent half of his life in France, the homeland of his father. So the French has a claim to him, too... Nobody would care about Chopin, though, if his music did not speak so personally and intimately to so many of us. His letters are filled with nostalgia and homesickness, but also with criticisms of backward musical life in provincial Poland, and praise for the enlightened and elegant aristocracy of Parisians salons...

Many other Polish composers chose to, or had to, live abroad. Some were remembered, some forgotten, some left in search of better career options, others were sent into exile by the edict of the Tsarist government - after each failed uprising in the 19th century, yet another group of composers left to make music elsewhere, than Poland. A new biographical dictionary, with extensive historical essays presents 100 Years of Musical Emigration, Polish Composers Abroad, 1918-2018. Based on an original idea of Dr. Marlena Wieczorek (whose pioneering work on emigre Roman Maciejewski, composers of many mazurkas, deserves to be better known in the U.S.), this volume consists of theoretical and historical essays as well as 63 portraits of composers who left Poland in the 20th and 21st centuries. 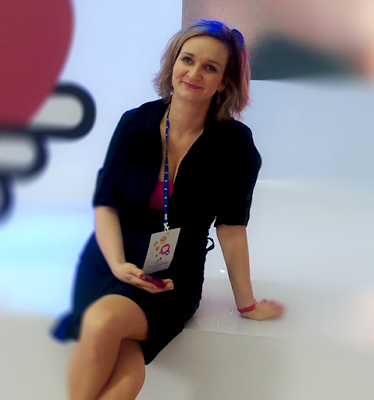 Edited by Marlena Wieczorek, Beata Boleslawska-Lewandowska, Malgorzata GAmrat and Magdalena Nowicka-Ciecierska, the book was published by Fundacja MEA Kultura in Gliwice (2018), with colorful artistic portraits of each composer, and attractive imagery.  The non-governmental organization brought together many Polish musicologists and historians from around the country and from abroad (U.S., Germany) to present their research and create profiles of many emigre and exile composers.

The unconventional volume starts with acknowledgments by Marlena Wieczorek, followed by an unconventional conversation about the book by two editors, Wieczorek and Boleslawska, and an overview article by Danuta Gwizdalanka. There are three main parts of the volume.

In the first section, seven scholars discuss various aspects of the lives and music of emigres -the reasons for emigration (Wieczorek), countries and continents they went to (Guzy-Pasiak, Trochimczyk, and Laskowski), the styles of their music (Lindstedt), their reception and neglect (Boleslawska-Lewandowska), and their travels and digital presence (Stefanski).

The composers' portraits were written by some of the same music historians who penned the introductory essays. They were based on personal interviews with the same questions asked of all participants.  There are sixty three portraits of composers in the book, organized in an alphabetic order, so it cannot be read "back to back" - or, if is read like that, becomes a vertigo-inducing whirlwind of lives, ideas, countries, genres, issues...

The book is unique; it brings together different views on emigration, the composers' reasons to leave and come back, their musical styles, careers and impact on Polish music history.  It is a valuable study not only in Poland but for historians of immigration, Polish diaspora and similar studies around the world. It should be translate into English and even other languages as soon as possible.  Since it is already out of print, so soon after publication. The second edition is in preparation, and more information can be obtained from: kontakt@meakultura.pl 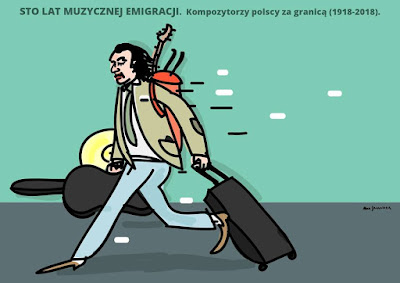 "A valuable, necessary publication. Rarity! The information contained in it is extremely valuable as it was laboriously collected at the source, in direct conversations, interviews ... Such information about composers and their music will not be found either on the Internet or in Wikipedia."
~ Composer Marzena Komsta


"Another visionary project of the MEAKULTURA Foundation ... A publication of a kind that has never before been seen in our country, both in terms of concept, substantive content and graphic design. The publishing house  contributes to the social campaign Save the Music, of which I am Ambassador and in which I deeply believe. Because its initiator and editor, Dr Marlena Wieczorek, who is also the author of the concept of this unique book, is one of those pioneers of culture that fully reflects her whole heart for the sake of art in Poland."
~ Scholar, Dr. Krzysztof Komendarek-Tymendorf

"A few words about the Lexicon. First of all I congratulate you for embarking on such a short project in such a short time!  The book surprised me, not only with the original, colorful graphic design, but above all, due to its accessibility - with all scientific research contained within, it still can be read with interest! For some time I have been exploring the subject of emigration, so for me it's a treat... I got very busy with it for a few nights. The concept is well-thought-out and coherent - from broader issues (also extra-musical ones, such as motivation) to detailed stories of many composers. It includes studies of general issues: directions, reasons for emigration, trends. It is very valuable and original; in the past, researchers focused on individual names, not whole generations!"
~ Kinga Krzymowska - Szacoń

"Finally it is here, though at times it seemed that the work would never end, we could not do it... But it arrived, and seduces with the beauty of the graphic design, the originality of the overall concept, so many profiles of exceptional artists and such great authors. Above all, the pleasure of reading this book is unique. I am very happy that I could take part in this project and I hope that it will provide an inspiration for further research and that it will become a platform for dialogue about definitions of national and emigration-based aspects of music - indicating that, in principle, Polish music is one."
~ Dr. hab. Małgorzata Gamrat

[...] it is an attempt to restore Polish culture to an inadequately present, badly present and sometimes absent works of music. The reader can at times be surprised by how many names he did not know, or how many of them he never associated with the emigre context. It is an outstanding work, about so much excellent music that is not quite known in Poland. [...] Like any good book about art, this will also force you to revise your own knowledge and beliefs, re-evaluate and search for new ways of understanding the artistic situation in which we are. [...] I can only encourage you all to read it; I  promise that it will be time well spent.
~  Dr. hab. prof. Krzysztof Moraczewski. 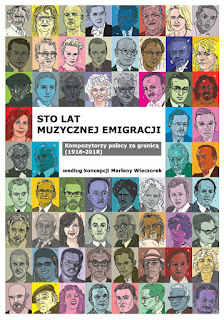 For the record, here are the details about my three articles in this important and beautiful volume:

Posted by Maja Trochimczyk at 9:04 PM No comments: