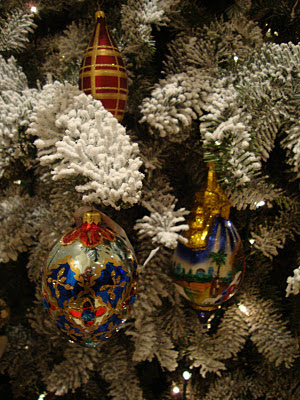 In America, December is the holiday season. Houses are decorated starting on December 1 and each weekend brings at least four party invitations, luncheons, dinners, and Christmas carols sing-alongs. By the second week of January all of it will be thrown out or packed away and the Christmas season will recede into the distance.

The calendar of celebrations looked somewhat different in Chopin's Paris: yes, there were gatherings in December, but the real party season started with the Christmas day, and went on and on, until the end of Carnaval in early February. The rustle of taffeta and richly colored velvets, the glimmer of candlelight, jewels sparkling like laughter... Kerri Buckley's poem "The Songs of Chopin: A Villanelee" published in Chopin with Cherries captures the mood of the seaso, while looking back at the romantic salons frequented by Chopin:

The Sounds of Chopin: A Villanelle
by Kerri Buckley

The rotational and repetitive character of the villanelle is well suited to the subject, filled with the turns of the waltz, and the alluring moods of the evening. Kerri gave us a wonderful holiday gift in this poem. The online editor programs do not allow extra spaces which separate phrases and words, so the layout of the poem is somewhat faulty. This should not detract the readers from its beauty.

Chopin was a creature of the aristocratic salon, elegant and refined. He liked to remember the simple music of Polish countryside, including folk dances and carols. He transformed the cited or stylized music to the universal level. The beloved lullaby carol, "Lulajze Jezuniu" appears in Chopin's Scherzo in B-minor, Op 20, written in 1831-32 and dedicated to his friend Thomas Albrecht. The sweet melody appears in the central, slow section of the Scherzo, marked Molto Piu Lento.

I selected several recordings of this lovely Christmas Carol and its version in the Scherzo to share with Chopin lovers this Christmas. 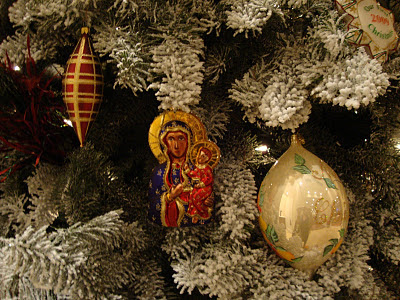 For my Poetry Laurels blog, I created a couple of illustrations to my Christmas poems, one from this year and one from 2009. In early December, I was asked to read some poems at a party and realized that I have not written my annual Christmas poem yet. It came to me in the rain, when I could barely see the road ahead and the sky was heavy with darkness. 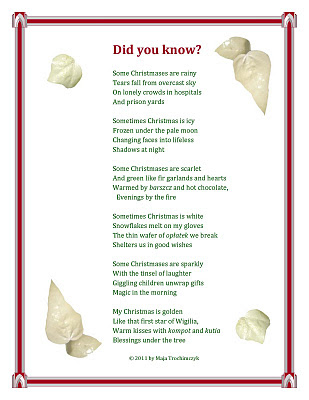 Some Christmases are scarlet
And green like fir garlands and hearts
Warmed by barszcz and hot chocolate,
Evenings by the fire

My Christmas is golden
Like that first star of Wigilia,
Warm kisses with kompot and kutia
Blessings under the tree

I paired this poem with a photo I took this October at the Notre Dame Cathedral in Paris. I liked the open window, looking out through the multitude of shapes and colors onto a simpler, luminous world. 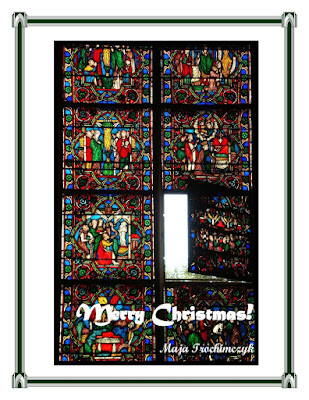 The picture became the cover of my Christmas card. I also reprinted my last year's holiday poem, "Rules for Happy Holy Days" as a reminder about the importance of celebrating the holidays in the right way, by sharing and loving. This poem was written for my last year's Christmas wishes. These Rules are timeless. 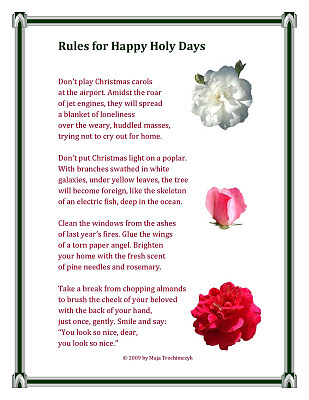 Don’t play Christmas carols
at the airport. Amidst the roar
of jet engines, they will spread
a blanket of loneliness
over the weary, huddled masses,
trying not to cry out for home.

Don’t put Christmas light on a poplar.
With branches swathed in white
galaxies, under yellow leaves, the tree
will become foreign, like the skeleton
of an electric fish, deep in the ocean.

Clean the windows from the ashes
of last year’s fires. Glue the wings
of a torn paper angel. Brighten
your home with the fresh scent
of pine needles and rosemary.

Take a break from chopping almonds
to brush the cheek of your beloved
with the back of your hand,
just once, gently. Smile and say:
“You look so nice, dear,
you look so nice.” 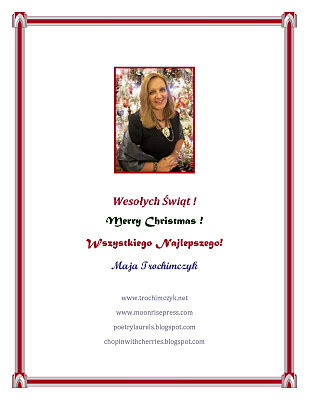