the lily of our valley sings happiness in high noon sun 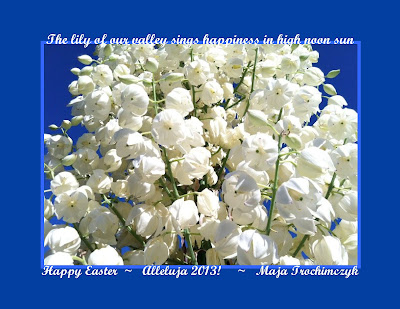 But first and foremost let us enjoy Chopin's music this spring.

I did not find any recordings of today. The change of her appearance to the current movie star is striking!


Posted by Maja Trochimczyk at 12:39 PM No comments:


Was Chopin born on February 22nd, 1810 or on March 1st? By now, the March date is generally accepted. Why the confusion, then? Because of Chopin's birth record in the church books in Brochow, where he was baptized on April 23, 1810, with Fryderyk Skarbek (1792-1866), the son of the employer of his father, Count Skarbek, as his godfather. The record, discovered in 1892, gives February 22 as the birth date, but Chopin's family has always celebrated his birthday in March. The future composer's names are listed in Latin: Fredericus Franciscus.

The Brochow church was the parish for the estate of Zelazowa Wola, owned by Count Skarbek and now celebrated as the birthplace of Chopin. The pianist's father, Nicolas Chopin (1771-1844) was a son of a French wheelwright, Francois, and was born in a village in the district of Lorraine, France.  The Chopin family, in turn, had roots leading back to an impoverished Swiss village in the Alps. The 16-year old Nicolas came to Poland in 1787 with Adam Weydlich, an estate manager for another Polish aristocrat, Count Michal Jan Pac. After the estate was sold, Weydlich and Chopin traveled to Poland, where the composer's future father spent five years working in Weydlich's tobacco factory in Warsaw. He changed his first name to Polish - Mikolaj and became a Polish patriot.  A participant in the Kosciuszko Insurrection of 1794 - the last failed attempt at defending Poland's independence - Mikolaj Chopin was injured in the fighting and left Warsaw to work as a tutor for sons of landed gentry.


In June 1806 Mikolaj Chopin married Justyna Tekla Krzyzanowska, a poor relation of Count Skarbek in the same Brochow church where his son was later baptized. The Count and Countess Ludwika Skarbek had four children; the Chopins first, Ludwika, was named after the Countess. However, soon after Fryderyk's birth, the quiet estate life ended. When the Count left the country due to his unpaid debts and the Skarbek children grew up, the abandoned wife could not afford a tutor. The Chopins had to move elsewhere.  The family packed their bags in July; Nicolas became a French teacher at the Warsaw Lyceum and the young Fryderyk's (or "Frycek" as he was nicknamed at home) urban childhood began.

Did Chopin celebrate his birthday? Apparently not. There are only seven mentions of this word ("urodziny") in his letters, and only two of these relate to his own birthday and name-day - in letters from his mother (1842 and 1848).  The other "birthdays" are celebrations of the Parisian society to which Chopin was invited. There are, however, twenty four mentions of the name-day - "imieniny" - the celebration of the patron saint after whom an individual is named and who serves as the individual's holy protector and benefactor.  Some of the earliest documents in the Chopin Museum in Warsaw are beautiful cards he made and painted for the name-days of his father and mother.

In fact, the very first letter by Chopin, at the age of sixteen, is such a card for Dear Papa, written on December 6, 1816, the feast of St. Nicolas, the traditional patron of gift-giving.

When the world announces this celebration of thine
Name day, my Papa, it brings joy also to me,
Because of the confluence of my feelings.
May thou live happily, not knowing harm or strife,
May God always bring thee a prosperous fate,
These are the wishes I desire for thee.

I congratulate thee, Mama, on thine name day
Let heaven bring about what I feel in my heart
May thee be always healthy and happy
May thee live the longest life in prosperity.

Indeed, there are abundant references to name-days in the entire family correspondence, including Fryderyk's annual "name-day" letters to his father and mother. They send their wishes in return. His mother, Justyna, wrote in March 1842, with some motherly advice about trusting God and thankfulness for divine blessings, which alone help being "happy and peaceful." As she explained: "I thought much about you here, my dear child, on your birthday and name day I'm sending to you in my spirit my blessings, while praying for your prosperity. Let God bless you and always keep you in his care."

One of the last letters of Chopin to his family, written on June 25, 1849, four months before his death, in the throes of last illness, mentions a name-day letter to his Mother as a means of being there at her celebration, if not in body, at least in spirit and thought.


The music world celebrated Chopin's 200 birthday in a multitude of ways back in 2010. I attended an amazing birthday concert at the Grand Theater of Opera and Ballet in Warsaw on March 1, 2010, as a part of the Third International Chopin Congress.

We heard the Piano Concerto  in E Minor twice the same evening, in two completely different interpretations, of which the modern and Olympian Garrick Ohlson's remains in mind.

Three years later, on March 5, 2013, the Ignacy Jan Paderewski Society of Los Angeles decided to celebrate Chopin's Birthday with a bash involving actors and pianists at the Colburn School of Music. The event, grandly entitled "An Evening of Piano and Drama Featuring Internationally Renowned Artists" featured two phenomenal pianists - Gloria Campaner - an Italian pianist who won the previous edition of the American Paderewski Piano Competition, and John Perry - Professor of Piano at USC Thornton School of Music, Kocyan's mentor and teacher, and one of the most important piano pedagogues of this century.

Their interpretations of Chopin, Schubert, and Debussy left the audience breathless. John Perry's profound and inspired interpretation of two Impromptus by Franz Schubert was especially fascinating - as he celebrated Chopin's genius by not playing his music, but by "channeling" his spirit of sublime artistry and emotional maturity. Gloria Campaner, a rising star of the classical music world, has played a half-recital, with German and French music enveloping the "core" of Chopin.

Excellent quality and talent were also apparent in the performances by Wojciech Kocyan, Artistic Director of the Paderewski Society and Professor of Piano at Loyola Marymount University, and Dmitry Rachmanov, Professor of Piano at the California State University, Northridge. The talents of these pianists were well matched by the acting ability of Jane Kaczmarek and Marek Probosz who narrated the Birthday Bash and turned from a concert into a party, with some goofy fooling around.
﻿
The comedic element was especially strong in a staged performance of a scene from Paderewski Memoirs, with Kocyan standing in for Paderewski and noodling at the piano, and Kaczmarek performing his impetuous "know-it-all" hostess, a student of Chopin convinced she knew better how to play a particular etude. Their act, complete with a grandfather clock - the ringing of which was to be a part of the music - as well as costumes and stage setting was quite entertaining. Coupled with an incredibly high level of artistic performances by the pianists, it would have left us with a delighful feeling of an evening well spent.
﻿﻿

All is well that ends well, one should say, though, and this concert did not end well at all. Instead of just singing "Sto Lat" to Chopin with Kocyan's improvised accompaniment at the end of this Birthday Concert, we were explosed to a transcription of "Happy Birthday" for two pianos in Chopin's style. Worse still was the fact that this piece came right after the last notes of l'Isle joyeuse by Debussy played by Gloria Campaner with such sublime inspiration that the listeners were still on the "seventh cloud" of artistic delight... Thanks to Kocyan who decided to call for a Polish "Sto Lat" right afterwards, we ended the concert on a high note and left this tribute to Monsieur Chopin with a song...


Lesson for the future: if you have engaged the talents of the stature of Kocyan, Campaner, Perry and Rachmanow, do not put a Mr. and Mrs. Pawlicki in this exalted company, where they clearly do not belong. Nuff said.

At the end, I went to say hello to Jane Kaczmarek, whose cordial stage presence and lovely voice and laughter have enlivened this birthday concert. She had the same magical effect during the first Chopin's Birthday Bash organized by the Paderewski Society in February 2010. I was thrilled then to hear that she read several poems from the Chopin with Cherries anthology - including some of mine.  But I was not there to hear her, since I was in Warsaw, at the Chopin Birthday Concert...
﻿﻿﻿﻿
__________________________________________


Posted by Maja Trochimczyk at 9:21 AM No comments: