Lutoslawski - Music and Legacy by Stanislaw Latek and Maja Trochimczyk (Vol. 8, no. 2) 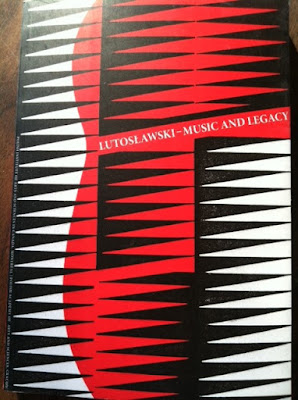 Lutoslawski: Music and Legacy contains proceedings of the International Lutoslawski Conference, held at McGill University, Montreal, Canada, November 21, 2013, as well as interviews with the composer and documents from his 1993 visit to the Polish Institute and McGill University.

This book is found in only six library collections worldwide and deserves a wider recognition of its rare studies and materials about Lutoslawski's life and work that it contains.


Part I. A life remembered 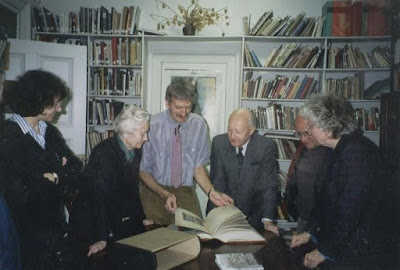 Lutoslawski at the Polish Library in Montreal, with Librarian Stefan Wladysiuk,
PINC President Dr. Hanna Pappius, and Board Members, Montreal, 1993

From the Preface by Dean Sean Ferguson:

"During the first year of my doctoral studies in composition at McGill in 1993, Witold Lutosławski visited our faculty to receive an honorary doctorate from the university. My memories of this historic event are still vivid today, over 20 years later. I remember a sophisticated, even aristocratic man who was nevertheless highly approachable for myself and my fellow students in composition, as well as the many performance students he met. More than anything, I remember him as being incredibly generous, both with his time as well as with the feedback he gave to the many students he met. One of our colleagues, a violin student from Italy, told us about her transformative experience playing for Dr. Lutosławski – an experience that marks her to this day, as she continues to perform his music around the world. The two public lectures he gave during this time were eagerly anticipated and attended by large audiences. The energy, vitality and spirit that he showed during his visit only made it more shocking for all of us when he passed away only a few months later. We were all devastated at the news, yet incredibly grateful to have had his presence at our school."

"Because of the impact that Witold Lutosławski's visit had on me, and his important stature in the world of contemporary music, I was therefore extremely enthusiastic when I was approached by Stanislaw Latek from the Polish Institute of Arts and Sciences in Canada about an academic event celebrating Lutosławski's 100th anniversary. As Dean of the Schulich School of Music, it was also a wonderful chance to collaborate with the Polish Academy of Arts and Science in Kraków and a number of other important partners. I was impressed by the high level of the presentations and am absolutely delighted that this conference has led to the publication of this important volume. Among the many people who worked to support this event, I would like to especially thank Mr. Latek for his leadership, as well as Dr. Christoph Neidhöfer who, as Chair of the Music Research Department of the Schulich School of Music, organized and coordinated McGill's participation in the event." 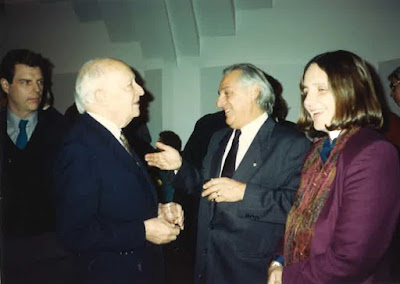 From the Introduction by Dr. Stanislaw Latek and Dr. Maja Trochimczyk

Who was Witold Lutosławski and why do we want to remember him? As with all historical personages, this question can be easily answered in this era of instant access to electronic resources. Why publish an old-fashioned book, then? Speed is not everything.  Lutosławski’s life spanned the 20th century – a century of horrific crimes and monumental inventions. Born in 1913, he survived the outbreak of World War I in Poland, the Soviet Revolution in Moscow (that killed his father), the Polish-Soviet War of 1920, Germany’s invasion and occupation of Poland in 1939-1945, Stalin’s takeover of Eastern Block countries, and the establishment of fake democracy in Poland under Soviet rule in 1945-1989. He survived successive attempts of Poles to overthrow or transform the communist regime in 1956, 1968, 1970, 1981, and 1989.

After staying away from engagement in official politics and devoting his life to composing and conducting his music for over 35 years, Lutosławski  joined the reformers of the Solidarity movement in 1981, making a memorable speech about truth in the arts at the Independent Culture Congress in Warsaw that was cut short by the declaration of the martial law on December 13, 1981. He lived in interesting times.  His music remains a testimonial to his individuality, original artistic vision, and talent.  Performers, composers, and scholars continue to be drawn to it. Many books and studies have been published, but many gaps remain in the understanding of his compositional technique, his unique aesthetics, and the details of his biography.  Our book seeks to fill some of these gaps with new information and new scholarly interpretations.

Lutosławski ’s 1993 visit to Canada, on the invitation by the Polish Institute of Arts and Sciences in Canada – as a guest of honor for the Institute’s 50th anniversary –  has not been adequately described by his biographers in Poland and abroad. The visit was eventful and important. In addition to participating in the Institute’s anniversary events, Lutosławski received an honorary doctorate from the Faculty of Music, McGill University, gave lectures and attended a concert in Montreal organized by James Harley, and conducted his last concert in Toronto.  Of course, he was here with his wife, Danuta.

Why did he come? He had a soft spot for Polish libraries and cultural centers around the world; after having lost many manuscripts in the war, he believed in the importance of promoting and documenting Polish culture. He also needed to go to Japan in November, for the award ceremony of the Kyoto Prize granted to him by the Inamori Foundation, so instead of flying east through Asia, he went around the world, heading west… One of us (Maja) was a co-organizer of the visit, as McGill’s doctoral student in musicology, the youngest member of PIASC, and a liason to the composer, through his biographer, Martina Homma, Lutosławski’s personal friend and the only scholar who had access to his sketches and manuscripts during his life. 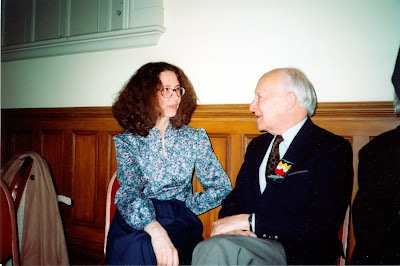 Homma was among the guests of honor at the events and did us all a great service, when she “orchestrated” the question period after the composer’s Beatty Lecture at McGill University. Knowing Lutosławski’s fragile state of health and the aggravation caused him by having to answer pointless questions (that he never showed, being unerringly noble and aristocratic when dealing with all sorts of fans pestering him with questions), Homma wrote questions on topics that the Polish composer liked talking about. We distributed these questions among graduate students of music dispersed through the audience and they asked them, one after another. The discussion was lively, as the great musician explained, in extenso, his compositional techniques, aesthetic stance, attitude towards contemporary music fads and lasting values, the importance of communicating with listeners, and the abstract nature of this musical communication.  The speaker and the audience were delighted. And so are we, after twenty years, still remembering fondly the eventful and momentous visit, the wonderful concert, the quality of performances inspired by the presence of the master, and the intimate and exciting conversations…

The idea of celebrating the twentieth anniversary of this event gave rise to the Lutoslawski Legacy Conference held at McGill University in Montreal  under the leadership of another one of us (Stan).
The book gathers the proceedings of the conference with two omissions.  Marcin Krajewski was not able to complete revisions to his paper in time.  Grzegorz Michalski replaced his spoken tribute to Lutosławski with a written text of a 1988 interview, translated into English by Maria Anna and James Harley, and published in a now-defunct magazine, Polish Music/Polnische Musik.  Additionally, the volume includes a Calendar of Life and a List of Works of Lutosławski prepared by Maja Trochimczyk and materials from the 1993 visit to Montreal.

Photographs and illustrations come from the private archives of Ewa and Grzegorz Michalski in Warsaw; Charles Bodman Rae in Adelaide, Australia; Robert Aitken in Toronto; New Music Concerts in Toronto; and Maja Trochimczyk in Los Angeles. We are particularly grateful to Dr. Felix Meyer, the Director of the Paul Sacher Stiftung in Basel who provided us with copies of Lutosławski s sketches and manuscripts.

We are also grateful to Marek Zebrowski, Director of USC Polish Music Center at the University of Southern California in Los Angeles, for permission to publish photographs of Lutosławski’s manuscripts donated to USC in 1985 and held on deposit in the USC Special Collections. 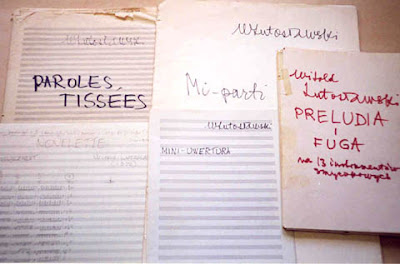 Posted by Maja Trochimczyk at 5:47 PM No comments: 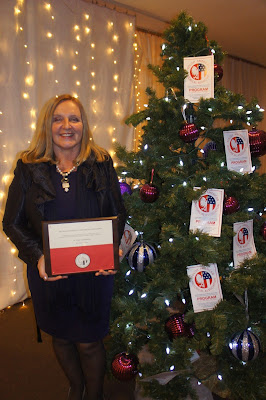 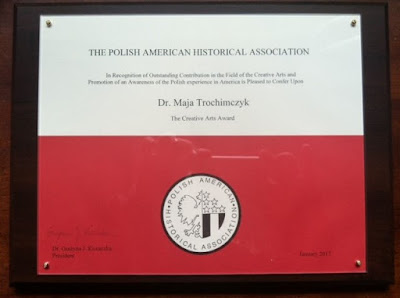 The Awards Ceremony included a concert of Carols by KaroliNa Naziemiec and Robert Lewandowski, so it was an event worthy of being noted on the Chopin with Cherries blog.  The Awards were presented by PAHA's outgoing President, Prof. Grazyna Kozaczka of Cazenovia College, NY, whose award citations are quoted below. 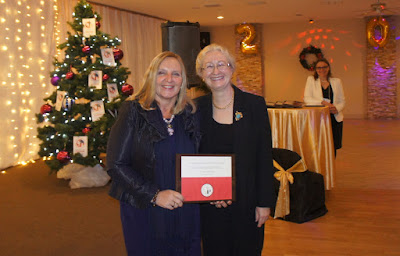 Maja Trochimczyk with Grazyna Kozaczka,
with Anna Mazurkiewicz in the background.

"The Creative Arts Award is bestowed on Dr. Maja Trochimczyk, for her achievements as a poet, especially in her two books dedicated to Polish victims of WWII, Slicing the Bread (Finishing Line Press, 2014), and The Rainy Bread (Moonrise Press, 2016). Her books of poetry include Rose Always, 2008; Miriam’s Iris, 2008; Into Light, 2016; and two anthologies, Chopin with Cherries, 2010, and Meditations on Divine Names, 2012. Dr. Trochimczyk served as Poet Laureate of Sunland-Tujunga, Los Angeles in 2010-2012 and was nominated for the Pushcart Prize in 2016." 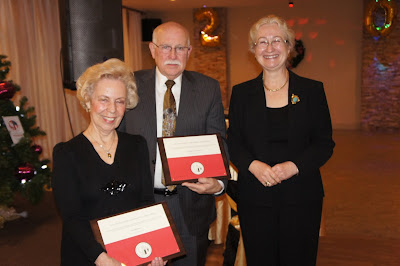 "The Amicus Poloniae Award recognizes significant contributions enhancing knowledge of Polish and Polish-American heritage by individuals not belonging to the Polish-American community. It is presented to Dr. Alvin Mark Fountain II and Brenda Bruce who co-founded the Paderewski Festival in Raleigh, North Carolina in 2014 (paderewski-festival.org).

Dr. Fountain, the President of the Festival, is a former administrator with the State of North Carolina and for more than 25 years he taught history at North Carolina State University. In 2008, Dr. Fountain was appointed as an Honorary Consul of the Republic of Poland.

The Vice-President and Secretary of the Festival, Brenda Bruce is an accomplished pianist, harpsichordist, acclaimed teacher, and accompanist dedicated to the promotion of classical piano performance of the highest quality." 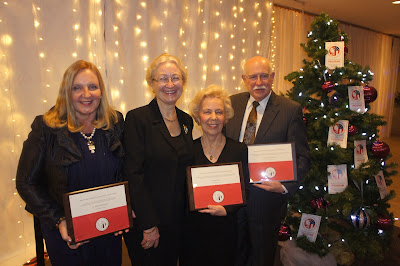 During the 74th Meeting, two papers on Paderewski were presented: 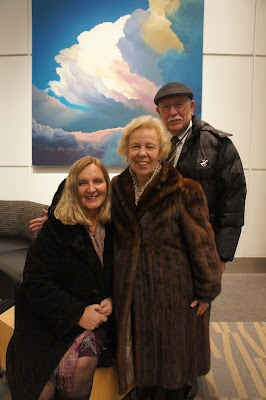 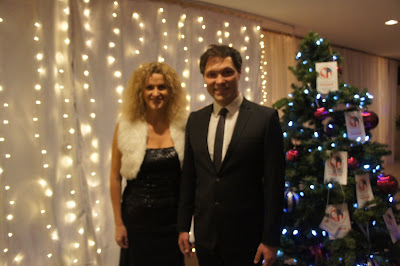 The festivities ended with a wonderful concert of Polish and English Christmas carols in jazz arrangements, performed by Karolina Naziemiec and Robert Lewandowski. KaroliNa plays the viola and sings, accompanied by Mr. Lewandowski on the piano. Since it was a bit out of tune and an upright, it did sound a bit honky-tonky, suitably so for Denver, the Wild West of the past... It would be great to hear Mr. Lewandowski playing on a better instrument, though, as his technique was impressive.

The warm voice of KaroliNa was well suited to the dreamy interpretations of lullabies - Polish carols of this character are very popular and one of them, "Lulajze Jezuniu," has been cited by Chopin in his Scherzo in B minor, and his relationship to the carol repertoire has been explored by Jan Wecowski and cited on a previous edition of this blog, vol. 3, no. 13.

Biographies of KaroliNa and Robert may be found on the PAHA News blog. 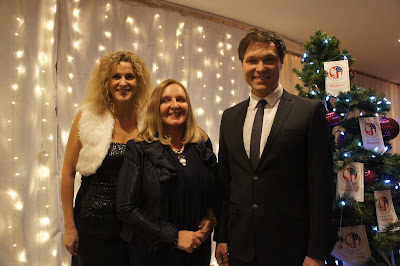 KaroliNa, Maja, and Robert at the Awards Ceremony

Posted by Maja Trochimczyk at 4:58 PM No comments: