Did Chopin Like Donuts? A Culinary Travelogue (Vol. 4, No. 1)

Just about every aspect of Chopin's life has been subjected to scholarly scrutiny. His music, his love life, his family background all the way back to those small Alpine villages of his distant ancestors... (See: Piotr Myslakowski and Andrzej Sikorski, Fryderyk Chopin: The Origins, 2010; I discussed Polish versions of these studies in a previous blog).

Scholars research Chopin's taste in opera, in women, in clothes. .. his daily habits, the sources of his income, the layout of furniture in his rented rooms... his letters...

On March 27, 1830 Chopin wrote from Warsaw to his friend Tytus Wojciechowski, describing the triumphs of his two concerts presenting the First Piano Concerto and other works.  The Concerto's slow movement, Adagio, completely delighted the musicians and critics. The use of a better Viennese piano at the second concert was also noted to Chopin's advantage: "What applause, praise that each note articulated like a little pearl..."
The young pianist was justifiably proud of the compliments for his virtuosity and precocious compositional talent, though slightly apprehensive of all this admiration being "too much all at once." For instance, he protested the specter of having a portrait made for someone he hardly knew, and, thus, "being wrapped in butter"... The latter expression ("nie mam ochoty, żeby we mnie masło owijano") is an example of Chopin's lively and idiosyncratic language. 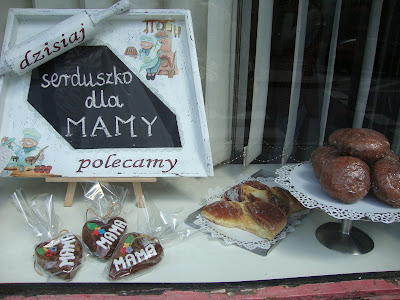 The composer ends the confessional letter with protestations of undying affection for his dearest friend and reveals that he was "hiding everything for dessert, and I have no other dessert than the most sincere embrace, because I only have you..." ("Wszystko chowałem na deser, a tymczasem nie mam innego deseru, jak tylko uściśnienia najszczersze, bo ja Ciebie tylko mam.")

So here's Chopin's butter and desert. . .  And now, for his favorite dishes. During the Third International Chopin Congress Wojciech Bonkowski discussed "Chopin as Gourmand" (February 2010, Warsaw). What difference does it make whether Chopin liked the Viennese Sacher torte, or had a favorite brand of wine?  We know, however, that in his teen years, he was most impressed by the Toruń gingerbread (piernik).  In early August 1825, the 15-year composer wrote a report from a trip to Toruń in a letter to his friend, Jan Matuszyński, discussing Copernicus's museum, various fortified buildings, and the local specialty:

"According to the custom of gingerbread makers, gingerbread stores are entryways filled with boxes kept under key and lock; in these large wooden boxes gingerbread rests, divided into different types and arranged into dozens.  This is all I am able to write to you about Toruń, maybe I'll tell you more, but now I will only write that it was the gingerbread that made on me the greatest impression, or impact." [Podług zwyczaju tutejszego piernikarzy, sklepy do pierników są to sienie obstawione skrzyniami na klucz dobrze zamykanymi, w których rozgatunkowane, w tuziny ułożonepierniki spoczywają....To jest wszystko, co Ci o Toruniu napisać jestem w stanie, może więcej opowiem, ale to tylko Ci napiszę, iż największą impresję, czyli alias[2] wrażenie, pierniki na mnie uczyniły. ] 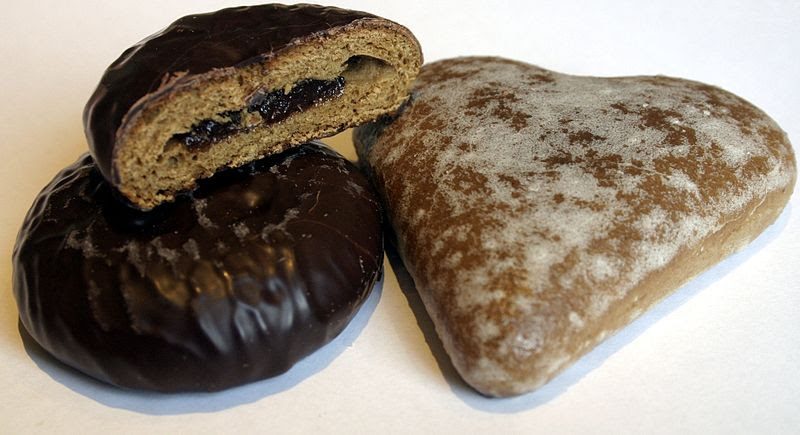 Chopin liked his carbs - he admitted spending quite a lot of money on Viennese "strudels" at his favorite "Wild Man" restaurant (letter to family from Vienna, 1 December 1830). But no taste nor the most elegant company at fancy dinners and parties could replace the lost family that he sorely missed, feeling sad and gloomy (letter to Jan Matuszynski, 26 December 1830).  Still, he enjoyed traditional Polish cuisine and admitted stuffing himself on "cabbage and beef cutlets" ("kapusta i zrazy") at a hospitable Viennese home of Dr. Johann Malfatti (1775-1859)who served traditional Polish delicacies to his Polish guests.

We could safely assume that the desserts included donuts in the mix. Chopin was familiar with the dish and saw it in favorable light, as we can infer from the following quote from his letter to Tytus Wojciechowski, written on 10 April 1830 from Warsaw: "I saw Karol's brother, he as cute as a donut..." (i brata Karola widziałem, ślicznie jak pączek wygląda). The increasingly difficult stay in Vienna ended with Chopin's departure for Paris, via Salzburg and Stuttgart.  He arrived there on 11 September 1831 and lived there ever since,  leaving only for vacations with George Sand and concert tours in England. Chopin's first descriptions of the metropolis reveal the overwhelming impression that the city made on the young visitor from provincial Poland:

"Here exist the greatest luxury, the greatest wickedness, the greatest virtue, the greatest sin, posters about sexually transmitted diseases are everywhere! - there is more screaming, yelling, noise and mud than you could possibly imagine - you can disappear in this crowd and it is comfortable because nobody asks you how you live. You can walk during wintertime down the street in rags, and then visit company of the highest rank - one day you will eat the most abundant and satisfying dinner for 32 sous in a restaurant with mirrors, gold and gas lamps - and the next day you can go to have breakfast where you'll get food for a bird and you'll pay three times as much, as it happened often to me, until I paid my dues...". (Letter to Norbert Alfons Kumelski in Berlin, written in Paris on 18 November 1831)

Soon, Parisian elegance improved his mood with countless dinner invitations that helped expand his network of supporters and students. At times, though, these invitations interfered with Chopin's friendships. For instance, in 1837 he apologized to Wojciech Grzymala, cancelling their get-together because of an "extremely boring dinner even without truffles at someone else's."  The composer-pianist made a living from teaching and concert appearances at aristocratic salons; he could not afford to refuse these "boring" invitations.
As for the wine and coffee, the consumptive composer had to replace them with warm milk, as he admitted in a letter to his good friend Julian Fontana, who took care of his Parisian errands while the composer was travelling: "I do not drink coffee, nor wine - only milk; I stay warm and look like a maiden..." (7 March 1839).

Nonetheless, two years later the composer asked Fontana to run a wine-related errand and find out the price of Tokay from a certain Dr. Roth in Paris; with Chopin's approval of the cost, Fontana was asked to then pass on the payment from and ship the boxes of Tokay to Marseille (24 August 1841). 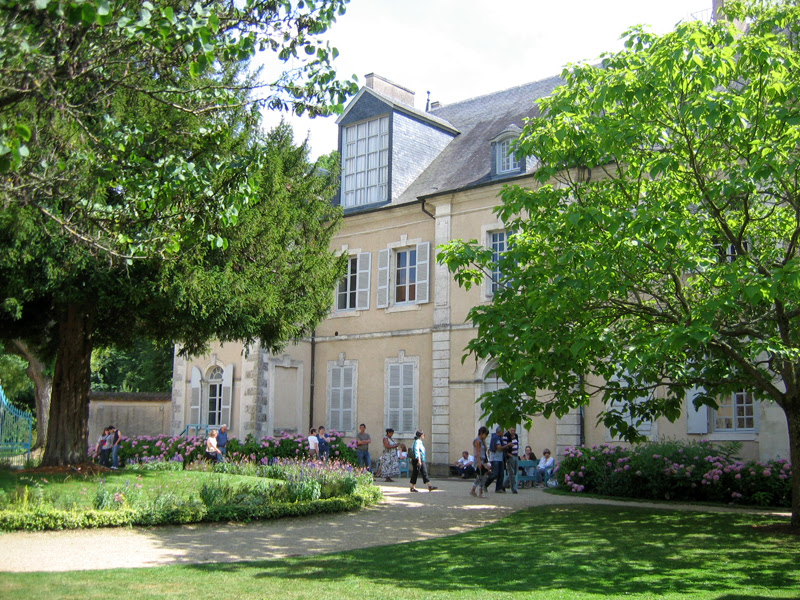 In the same letter, the composer admitted to having profound feelings of internal distress, covered up by outward cheerfulness:

"I'm joyous outside, especially among my own (my own I call the Poles), but I'm tortured by something inside - some misgivings, anxieties, dreams or sleeplessness - longing - indifference - will to live and a moment later will to die - a certain sweet peace, apathy, unconsciousness of the mind, and sometimes an exact memory exhaust me. I feel sour, bitter, salty - what a horrid mixture of feelings is tormenting me! I feel more stupid than ever." But then, Chopin admitted, he had to cast such feelings aside in order to not miss his social obligations. That evening he was planning to dress up and go to a special dinner for Ramorin and Langerman: "there will be several hundred [guests] in the enormous restaurant 'Au Rochercancal'" (Chopin's letter to Julian Fontana, 24 August 1841).

This restaurant, Au Rocher de Cancale, the second of this name, since 1846 in this location, is still open, you can visit it at 78 rue Montorgueil, Paris 75002.

Chopin also liked to eat at Cafe de Foy, located on his street. (It was open in that location in 1749-1854).  Then, of course, there was Cafe Tortoni, the most famous of Parisian restaurants of the century.  Since George Sand liked it (she met her husband Baron Dudevant in 1822 in that Cafe), she may have visited the fashionable restaurant with Chopin. But most of his dinners were taken with friends, admirers, students, benefactors, and fellow musicians in his or their homes, during elegant parties, often filled with music.  There are more than 60 mentions of dinners (obiad) in Chopin's letters, documenting a range of social engagements that mixed business with pleasure and often lasted well after midnight.

The busy social calendar  filled with never-ending invitations to dinners, parties and visits continued after Chopin went on a tour of England and Scotland.  On 16 October 1848, during his tour of England, Chopin wrote to his friend in Heidelberg, Adolf Gutmann:

"I wander around from one lord to another, from one count to another. Everywhere I'm welcomed with a heartfelt sincerity and infinite generosity; everywhere I find perfect pianos, beautiful paintings, and choice libraries, as well as hunting, dogs, endless dinners, as well as cellars, of which I have the least use. It is hard to imagine the sophisticated luxury and comfort of English castles."

As a fourteen-year old spending his vacations in Szafarnia, Chopin begged his father for permission to eat the local village bread, that he was forbidden to taste for health reasons. His pean to the glories of home-baked bread of Szafarnia reaches the level of culinary poetry... If only his doctor would have tasted this white bread made of beautiful flour, he certainly would have allowed his patient to eat it. At the same time, the young musician admits that he drinks a little bit of sweet wine and eats only the ripest fruit, with the approval of his sister, Ludwika (Letter to his "Most Beloved Parents," 10 August 1824).

No doubt, his Polish childhood included also the donuts with rose filling and candied orange peel garnish, just like the ones seen and described below. 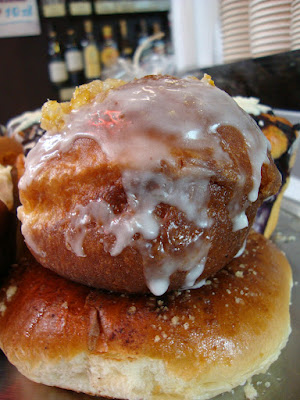 On Eating a Donut at the Kraków Airport

And the aroma of the rose confiture, a delight
I found in a café with a pretentious English name

Ah, forgotten stories, secrets, tastes of my childhood
My mom’s lessons how to properly peel an orange

Cook slices in syrup, add just enough vodka to the dough
To keep grease away… I bite into the soft, white flesh

And I saw her - frail, dove-white, forgetful
A shadow of the boisterous woman I feared

A dazzling hole in heaven, like the triangular eye
Of the Trinity resting on a stack of puffy clouds

Sweet Polish donut at a Kraków airport –
Full, round donut as it should be

Posted by Maja Trochimczyk at 11:13 PM No comments: