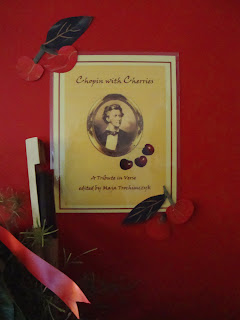 We spent a very special year in the company of Fryderyk Chopin, his music, his thoughts, his friends and poets writing about him. In February 2010, Chopin with Cherries was officially unveiled at the Third International Chopin Congress in Warsaw. In the past, there were many studies of Polish poets associated with Chopin: friends whose poems he set to music, and those writing about him and his music after his death. The Chopin with Cherries anthology and presentations of various aspects of its contents is the first effort to gather and study English-language poetry about Chopin. Our year-long journey was filled with exciting events and publications, leading to an increased recognition of the lasting value of this collection. The next step will be issuing a version for e-book readers, but it is time to celebrate what has been accomplished so far.

I am the most grateful to all the poets who submitted their work to this anthology and helped me find more poems to include. John Z. Guzlowski’s assistance has been invaluable in publicizing this collection through his Polish-American blogs and contacts. He also told me of Margaret C. Szumowski’s wonderful poem and connected me to Charles Fishman, who in turn sent me an inspired poem by William Pillin. Kathabela and Rick Wilson attended each of the four Chopin with Cherries group readings, in Pasadena, Los Angeles, Venice, and Chicago. At Venice and in Chicago, Rick played Chopin on historical flutes from his collection. They also hosted a Chopin Salon in Pasadena, helping local poets connect to Chopin's music. Dr. Mira Mataric has faithfully participated in all California readings and is working on Serbian translations of selected poems. 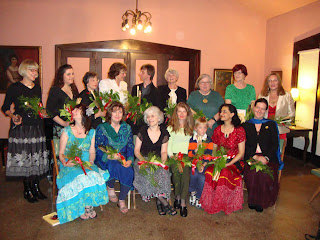 Three poets have responded to my requests for personal comments about Chopin’s music and their inspirations: Mark Tardi, Tammy L. Tillotson, and Ben Humphrey. It would be nice to hear from more poets…

As the editor of the collection, I took the liberty of nominating some of my favorite poems to the 2010 Pushcart Prize for Poetry. It was a very hard choice since I love all the poems in this anthology. I picked those who could “use” a nomination, so to speak… The Pushcart Prize and publication in the annual collection of the best poetry published by small presses and literary journals nationwide has become one of the most prestigious honors in the poetry field. The nominations are made by editors and publishers who select the best of the best from amongst the work that they have published during the past year. We are proud to present the following Pushcart Prize 2010 nominees:


Congratulations to all the poets! It would not be amiss to mention here that some of our poets have received other nominations and prizes. Elizabeth Murawski won the prestigious 2010 May Swenson Award (read her blog entry) Lois P. Jones and Millicent Borges Accardi were nominated for Pushcart Prizes by other small-presses.

CHRISTOPHER WOODS: “For those who have been moved by the music of Fryderyk Chopin, this new international anthology will be a treat… one breathtaking aspect of the anthology is the diversity of voices, both stylistically and geographically. .. One of the striking aspects of the anthology is the way in which the editor, Polish born Maja Trochimczyk, arranges the various sections, not only by musical forms, but also into sections like beauty and death, words that often come to mind when considering Chopin’s life, his passions and his early demise.” Christopher Woods in Contemporary World Literature 5 (Feburary 2011).

ELIZABETH KANSKI: "In Poland, June is the month for Bing cherries (czeresnie) and July for sour cherries (wisnie), but it is Chopin season year-round, especially in 2010, the 200th anniversary of the birth of the great composer. Maja Trochimczyk, Polish American music historian, poet and photographer, decided to celebrate Chopin's birthday in an unconventional manner: with 123 poems by 92 poets, gathered together into a handsomely produced and exciting new anthology." Elizabeth Kanski in the Polish American Journal, September 2010, p. 21.

ALISON ROSS: "What is most striking about this verse tribute is how deftly the editor weaves together the various themes, treatments and styles within the volume, meticulously detailed in the introduction and then presented format-wise in the book... All in all, I am immensely pleased with how this anthology turned out. In fact, it exceeded my expectations, because it is so comprehensive and cohesive. The poems are fascinatingly diverse in voice, topic, content, and style, and the poems reveal such richly individualistic interpretations of Chopin's powerful pathos. . . "Chopin with Cherries" is an anthology to treasure as intimately as one might cherish Chopin's compositions. Alison Ross, in the Clockwise Cat, May 2010

JOHN Z. GUZLOWSKI: "Maja Trochimczyk's Chopin with Cherries... is a masterful celebration of this composer and the complex range of emotions, impressions, memories, and dreams his music evokes... Finally, let me say that I cannot remember reading an anthology of poems centered around a single-theme that I liked more. The poems Maja Trochimczyk has gathered together to commemorate Chopin's 200th birthday are inspiring and exhilarating, as I have already noted, and - I don't know how else to say this - fun to read." John Z. Guzlowski in The Cosmopolitan Review 2 no. 1 (Spring 2010).

Posted by Maja Trochimczyk at 7:43 AM 3 comments: