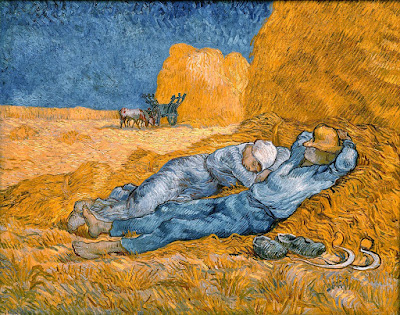 Could Chopin ever be friends with Vincent Van Gogh? If thinking of their personal style and social circles, the answer should be: absolutely not! Chopin was a Parisian dandy, wearing elegant, tailor-made clothes and appearing in salons of the aristocracy. He was a teacher of princesses and a friend of princes. In contrast, Van Gogh lived a simple, provincial life in southern France, wandered through the fields, or sat sharing meals with peasants in a local tavern. 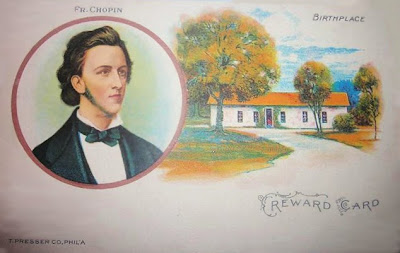 Yet, the intensity of the art of both creative souls indicates a spiritual and creative affinity. Deep inside, they were kindred spirits, it seems to me - sensitive, emotional, lonely, somewhat embittered and incessantly creating, completely dedicated to their art. Also, they both loved the open fields in the summer...Many of Chopin's letters from rainy, grey Paris to his family in Poland contain notes on nostalgia for the childhood summers in the village - with folk music, sunlight, and fun! 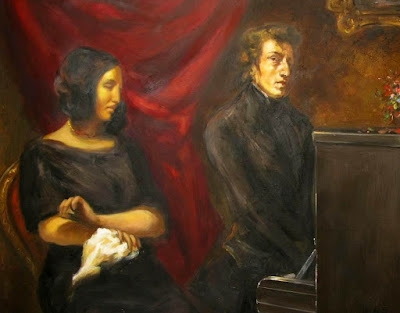 Reconstruction of the double portrait of Chopin and Sand by Delacroix, 1838. 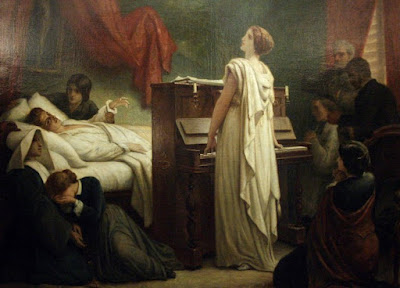 Chopin loved art and artists - his best friends included Eugene Delacroix (1798-1863) who painted the famous double portrait of Chopin and George Sand, later split into two, and Teofil Kwiatkowski (1809-1891) who painted the composer at his death-bed, surrounded by family and artistic friends. He valued highly the art of Auguste Clesinger, a sculptor who later married George Sand's daughter, Solange (Chopin took their side against Sand) and, after the composer's death, designed his tombstone in Paris. 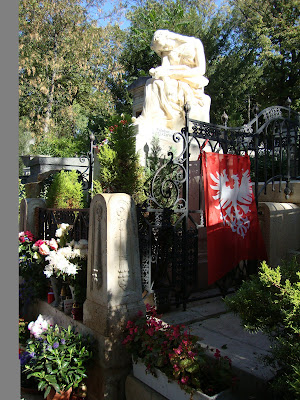 Chopin's tomb with sculpture by Clesinger

Mentions of painters are rarely found in Chopin's letters to family or friends, though in an early letter, the 15-year old pianist writes about his own artistic efforts. On August 26, 1825 from Szafarnia to family in Warsaw, Fryderyk mentioned his sketch of a folk musician from the village, that he drew after witnessing an impressive harvest performance by villagers. He refers to himself as possibly being a "painter, blinded to the quality of his own work." The most notable part of the letter, however, is its extensive description of the folk performance: hearing the music live in the village provided Chopin with a life-long inspiration for composing mazurkas and stylizing village music into high art.

Another famous letter to family, of 18-20 July 1845, written from Nohant, is filled with descriptions of sculptures as part of artistic news from France. While the letter mentions some artists by name, its title to fame lies in its discussion of nostalgia and remembering Poland's fields in rainy Paris - being in "imaginary spaces" (espaces imaginaires) of the heart. It clearly reveals the homesickness and loneliness of the composer, even surrounded by nature on the beautiful summer estate in Nohant. 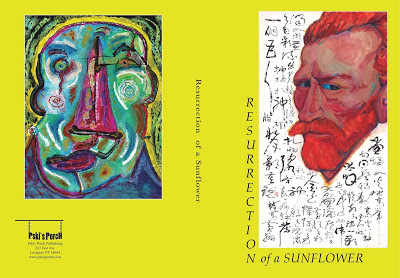 The Anthology is now available on Amazon.com

Paintings by Van Gogh inspired many poets, most recently gathered in an anthology Resurrection of a Sunflower (2016) edited by Catfish McDaris and published by Pski's Porch.  I was thrilled to have three poems included in that almost 600 page brick of a book. It is available at the Van Gogh Museum in Holland and online, if you want to know what paintings most inspired the poets.
https://www.youtube.com/watch?v=hvqFOEPgJQU (Mazurka Op. 7 No. 2, by Artur Rubinstein)

My "Mulberry Song" published in "Resurrection of  a Sunflower" was reprinted on the Poetry Laurels Blog in May 2017 - and it is found below.
http://poetrylaurels.blogspot.com/2017/05/celebrating-poetry-in-poetry-month.html

Another poem that I wrote "after" a Van Gogh's painting is entitled "Azure" and was inspired by  La Méridienne oú La sieste, d'apres Millet from 1890 - an astounding painting of azure, sapphires and gold yellows that I saw in Paris in 2014 (see the image above). Since, my blog also reports on Monet's Waterlilies with a cycle of poems inspired by those amazing paintings, and contains tons of photos from Paris, I'm reproducing the poem below.
http://poetrylaurels.blogspot.com/2014/05/lilie-and-konwalie-in-paris-monet.html

~ after Noon by Van Gogh and Millet

Half of the day's work is done.
She curls into a ball by his side
He stretches up, proudly thinking
of the bread they will bake,
the children they will feed.
Noon rays dance on the straw
they cut with their sickles
to finish the harvest when the sky
is still the bluest of summer azure.

She took the first fistful of stems
solemnly, among the rolling waves
of wheat ocean. She made a figurine,
placed it high up on the wooden fence
overlooking their fields. She learned
it from her mother, her mother before her,
generations reaching back to that first
handful of grain, droplets of wine
and water spilled at its feet.
The offering for the goddess of harvest.
They move together in consort
in the white gold of silence.
They rest together, two pieces
in a puzzle of bread to come.

(c) 2016 by Maja Trochimczyk, published in Resurrection of a Sunflower

In 2013, the creative writing group I belong to, the Westside Women Writers, held a workshop dedicated to Van Gogh's paintings. Two of them, in fact: selected from Van Gogh holdings at the Norton Simon Museum in Pasadena.  We wrote about Winter and about The Mulberry Tree. Here are poems about The Mulberry Tree that will appear in the Westside Women Writers anthology, "Grateful Conversations" (edited by Kathi Stafford and Maja Trochimczyk, forthcoming from Moonrise Press). 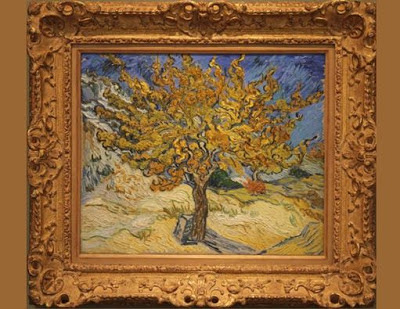 
Yellow mustard moss, green white
Gray lines.
A blue box learning
Up against the tree
Or perhaps a leather
mail bag
Near by.
Each stroke, a finger
Print,
A pushing back
of thick
Paint
The curl of a brush end
For leaves
And puffs of colorful
smoldering.


Millicent Borges Accardi's new poetry collection may be found on Amazon: Only More So @ Amazon and more information about her on her website:
http://www.MillicentBorgesAccardi.com

Another poet inspired by The Mulberry Tree, Madeleine S. Butcher, imagined a lovely scene in the countryside, while Vincent painted and a child kept him company:

It could be that this mulberry tree
is low enough for a child to climb
for a fine hiding place
to survey her domain
of far hills and reaching fields.

She might hide from her nurse
who is calling her name,
a wee figure almost gone - past the long fields -
her white apron flies up like a miniature flag.

And so this child becomes part of a branch
so still she is, sitting above
in the tangle of limbs
under cover of leaves
waiting for her friend in their mulberry tree -

The afternoon moves along
to the swirl of  leaves and buzzing bees,
the soft grit of chalk, the scratch of pen
the heel of his hand blending sky to earth
wind to cloud, branch to leaf -
fields and sheltering hills.

The afternoon moves along with the sun
and an occasional shiver of limb and leaf
as mulberries are picked and many are eaten
but most are dropped in a perfect lazy rhythm,
down straight down on his wide-brimmed hat. 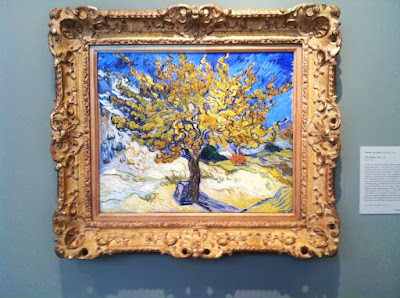 Kathi Stafford, the co-editor of the "Grateful Conversations" anthology, saw in the painting something quite different.

There is no blue without yellow and without orange.
~Vincent Van Gogh


The branches flare out. They'll go so dead
in winter that one will think, What can come back
from that? But Lazarus arms surge unbound
in spring. Now the surface blurs orange and yellow,
purple fruit hidden in the air. A cauldron whirls

Deep beyond the woods.  Mitten-shaped leaves
paw what the bark stands down, as an autumn
brush heads  to closure. What can arise from
this consistent loss?  A plain mystery shows itself
in the roots, twisted, Medusa hair swirling

Asps into the cold air. The tree collides with night,
stars and all.  Fence posts built from the Mulberry,
haphazard in night air.  Fruit       bark        hues
blaze in a bounty.  I hold them in my hands

as well.  Precious are the stripes of the wounded tree.

For me, the Mulberry Tree is a supernova, exploding in an invitation to stop and feel the connection to Cosmos:

I am the mulberry tree, ablaze with color
before the last day of autumn
I came into being in a flurry of brush strokes
on a cardboard, under the azure expanse of unfinished sky
turquoise – into cobalt – into indigo
green – into chartreuse – into amber – into gold
buds into blossoms – into fruit – into earth
to fall – to fall not – to end – to end not –
to begin
The brightest star, an ancient supernova,
I am aglow but for a moment
I outshine reality with artifice
exploding off the canvas
paint – paintbrush – swansong
leaves of the earth – ripples in the stream – crystals in the air –
aflame, all aflame
I make magic of the mundane shape of the world
sic est gloria mundi
it is – it will be – it is willed to be –
once captured in a frenzy of light, becoming
time transfigured into swirls of awareness
crystallizing at the edge of oblivion
I am the mulberry tree – I am the alchemist tree –
let my song fill your day till it glows –
become pure gold with me

The Mulberry Tree painting was so inspirational, that I dedicated another poem to this out-of-this-world tree - and it was recently published in the "Eclipse Moon" - an anthology of the Southern California Haiku Study Group edited by William Scott Galasso (2017).

There are no seasons in the Norton Simon Museum in Pasadena, or rather it is always the beginning of autumn, when you approach the blazing mulberry tree of Vincent Van Gogh.  It came into being on a piece of cardboard, in a flurry of brush strokes, under the azure expanse of unfinished sky. I see the bare cardboard peek from under the cobalt and indigo traces, layered briskly by Vincent’s  paintbrush, in a frenzy of passion. This tree is the brightest star, an ancient supernova: it glows, but for a moment. Yet, it outshines reality with artifice, exploding off the wall, imprinting itself onto my retina, to endlessly flourish in my mind.  I come back two months later, and there it is, still exploding, still golden, still dancing in a frenzy of light, 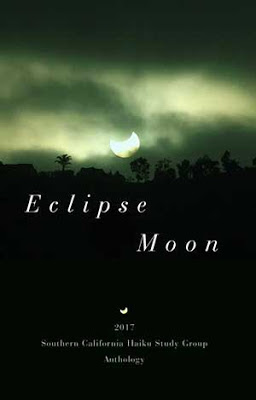 The anthology took its title from a haiku by Diana Ming Jeong:

eclipse moon  an abyss forged  over time
Now that we have returned to  moonlight, it is time to listen to a nocturne (Op. 9 No. 2, illustrated with Van Gogh's "Starry Night"):
https://www.youtube.com/watch?v=9E6b3swbnWg