Chopin and George Sand at Valldemosa in Marta Ptaszynska's Opera (Vol. 3, No. 1) 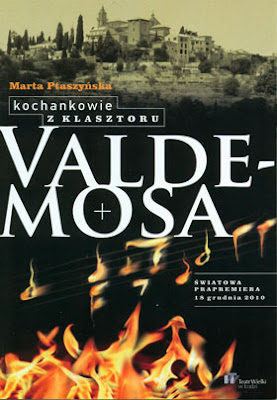 The life of Chopin has attracted many film-makers, but not many opera composers. Perhaps it is due to the musicality of this creative genius, the difficulty of composing "music about music," and the narrow confines of Chopin's personal life, which posed a challenge for a dramatic form. Marta Ptaszynska's inspired by the play by Janusz Krasny-Krasinski (The Lovers of the Valldemosa Monastery) wrote her own libretto for an opera, celebrating the Chopin Year in style.

The Lovers from the Cloister of Valldemosa was staged to a great critical acclaim at the Grand Theater in Łodź, Poland in 2010. Dorota Szwarcman, writing in Polityka, listed this opera among the most important cultural events of the year 2010. The opera consists of two acts depicting the ill-fated vacations on Majorca, that was marked by an outpouring of Chopin's creative talent, an significant worsening of his health, and rifts in his relationship with George Sand. It was the beginning of the end of their relationship. As Ptaszynska writes, "the story depicts the voyage and the stay of Chopin, George Sand and her two children, Solange and Maurice, in Majorca during the winter of 1838. Their expectations of wonderful vacations together were very high, but the trip quickly became disappointing and disastrous for Chopin and George Sand."

The entire libretto may be found on the website of the University of Chicago in PDF format: Ptaszynska's The Lovers from the Cloister of Valldemosa.

A review in a recent issue of the IAWM Journal (Fall 2011) published by the International Association of Women in Music emphasizes the dramatic talents of the composer, who was able to construct a well-designed story, with rich characters, strong conflicts, and a sense of tragedy that permeates Chopin's entire life of illness and premature death.

The composer's synopsis of the opera is reproduced below.

The opera opens with the arrival of Chopin, Sand, and her children in Palma, in the villa S’on Vent. Everyone is enchanted by this place, by its fantastic sunny weather, beautiful landscapes and architecture and, most of all, by the great hospitality of the native Majorcans including Señor Gomez, the owner of the villa S’on Vent. But, very soon, this enchanting environment changes into a cold, humid, and unpleasant place with extremely rainy weather and miserable living conditions. Chopin becomes seriously ill. The three Spanish doctors, instead of helping Chopin, spread the message that he has tuberculosis. At that time tuberculosis was considered as a very infectious and dangerous disease. Señor Gomez immediately gives his verdict and tells them to leave his villa. In total desperation, they all travel to the cloister at Valldemosa, a completely empty monastery with only two monks and a cook, Maria Antonia.

Act II takes place in the monastery Valldemosa and depicts Chopin’s great struggles to compose in these enormously difficult and miserable conditions on a completely out of tune and very old “junk” type piano. But, Pleyel did not forget about Chopin and sent him a “real” concert piano at Valldemosa. Chopin, continuously ill, is working very much even in this rainy and wintry weather, forgetting entirely about George and the world. But at this time, life in the cold, humid, and dark monastery takes its turn on Chopin. Sickly and entirely in despair, he decides to return to Paris in the middle of a tempestuous storm at sea.