Chopin Heard on YouTube with Listeners Comments, and a New Portrait (Vol. 12, No. 2) 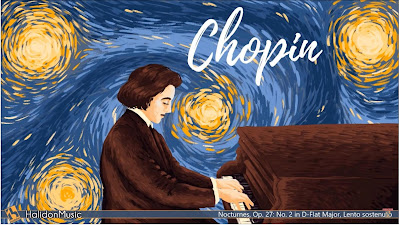 After a long walk along the Rim of the Valley Trail, I did not want to get off the sofa and instead of getting a Chopin CD, I turned on YouTube, https://www.youtube.com/watch?v=Jn09UdSb3aA, The Best of Chopin by Halidon Music. Three hours by pianists I never heard of - Giovanni Umberto Battel, Rogerio Tutti, and Vadim Chaimovich. I'm not that well versed in the younger generations of pianists. But I can say that these three are all wonderful. The music was as soothing as Chopin always is after a long day: when you listen to a Berceuse or Andante Spianato you enter a different world of affection, nostalgia, and brilliance.

While listening, I scrolled down to see what other listeners say, and as always, they love the music, and express their admiration in unique style. This is what keeps the music alive - its direct emotional impact on the audiences, generation after generation, year after year.

Youssef Slimi: "Chopin may be the founder of modern music. His music sounds like it has just been made. He is really a genius."

Genia Sherwood: "My dad played this and I remember lying under the Steinway feeling the vibration and allowing the music to fill my ears and my soul. I will always love this piece. It was also used in the movie, The Turning Point as Leslie Brown bourree'd across the stage."

Graanvlok: "My favourite composer. He captured the human condition so perfectly - the beauty and the anguish."

Eschelar: "Nocturne in C Sharp Minor... in Assassin's Creed Syndicate, you can explore the Victorian era Buckingham Palace. You might find the White Drawing Room, which has a piano and a pianist playing a shortened version of this piece. It is one of the most memorable things I've encountered in a video game and sadly, just about the only memorable thing in that entire game."

Soul Boken: "Chopin was not human, this soul was a gift from the universe <3"

Karin Anna Maria: "such a genius. his music is pure bliss"

Gabriella Salvador: "Just learned I can't listen to Chopin while studying because I become too emotional but also in the best way possible."

Maude Gonne: "I was looking at a portrait of Chopin and saw such sensitivity and suffering etched on his face. I thought the nature of genius is the ability to turn suffering into art which touches our hearts. Did he realize that  he would still be reaching out and helping other struggling souls nearly 200 years after his death?"
Beautiful Classical: "Pianos, unlike people, sing when you give them your every growl. They know how to dive into the pit of your stomach and harmonize with your roars when you’ve split yourself open. And when they see you, guts shining, brain pulsing, heart right there exposed in a rhythm that beats need need, need need, need need, pianos do not run. And so she plays."
Myau: "I've never listened to classical music in my life, what is this sorcery. Why is it so moving, what are these emotions, why am I crying AAAAAAAAAAAAAA"
Rat Girl (about the Nocturne Op. 9, No. 2): "I genuinely feel this song. you can listen to it, sure, but if you dont feel the emotions this work of art is trying to send you, listening to it is pretty much useless. this song, for me, personally, makes me forget about everything and everyone. it takes care of all the anxiety that's been building up for the past couple of weeks and just empties me completely. I'm hollow inside when it comes to listening to this, but there's also something there, in my heart, it's not completely hollow. theres still some emotion, emotion awakened by this piece. the slight spark of joy that's still left after holding all my emotions trapped inside and not letting them go. and that slight spark of joy being too powerful and overwhelming that I just break down completely. I crumble to pieces. this piece has a big impact on me for some reason and honestly I'm not mad at it. anyway, what I'm trying to say is that music/a work of art isnt created to just be admired, its created to be felt. thank you for reading this."-a random 13 year old. 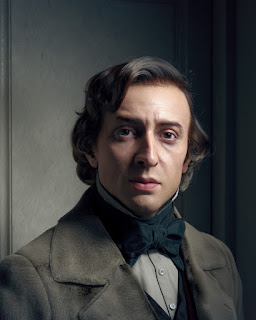 A computer artist, named Hadi Karim decided to use the existing photos of Chopin and some portraits to recreate his "photograph" with modern technology. He managed to capture the sensitivity, elegance, and suffering of this genius whose music continues to touch and inspire, or even ambush unexpectedly with a torrent of emotions.  It speak directly from the heart to the heart. That's true magic. Now we try to analyze it, describe every aspect of his life, illness, relationships, tastes - the flowers he enjoyed in his rooms (violets), the food he ate (gingerbread from Torun), the clothes he wore (fancy white kid gloves and the most elegant evening attire). Yet, the mystery remains.
One of only two daguerreotypes of Chopin made during his lifetime, this one is blurry and does not show much, except the evening attire. This photograph was taken in 1845 or 1847, the original was lost in WWII, it was discovered in 1936: 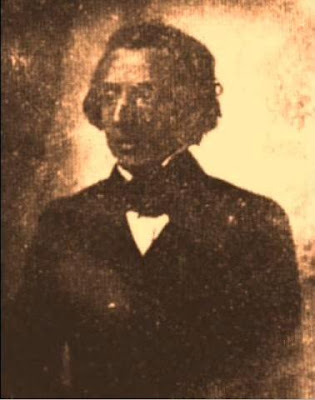 The better known photograph by Bisson, from 1949, was taken just a few months before Chopin's death at 39. It is so full of suffering, it hurts to just look at it. 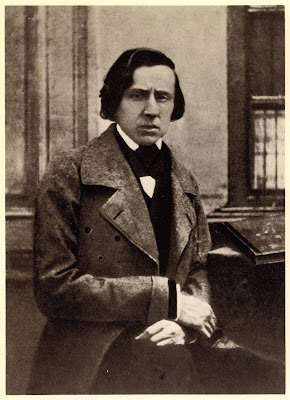 There was also a death mask made by Auguste Clesinger after Chopin's death: 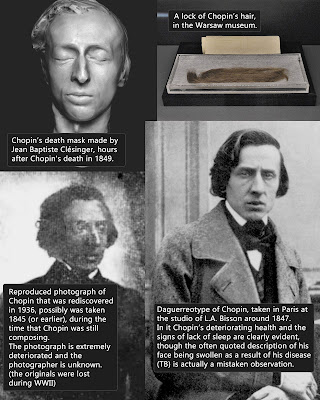 reproduced from https://www.artstation.com/artwork/Z5LYXm
Here's another set of fictional photographs of Chopin reinvented in the 20th century by Hadi Karim. 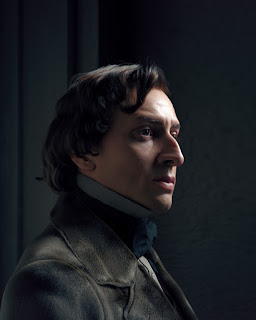 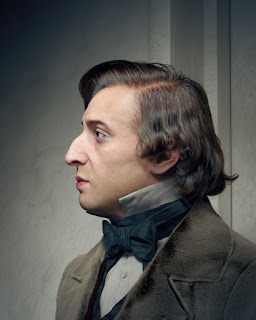 I think these portraits are remarkable and much closer to what Chopin looked like, as shown in the historical daguerreotypes than so many 19th century portraits, painted from imagination and re-creating the sickly and vulnerable genius as an all-power young Master of music, a country gentleman in a fur coat from his estate. 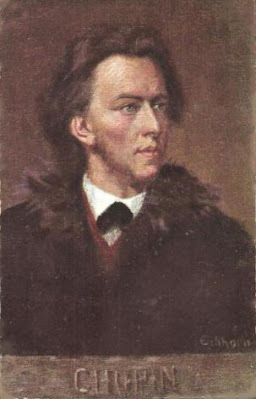 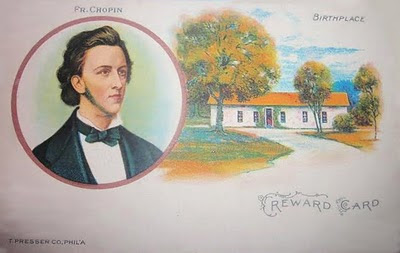 Instead of continuing with the Best of Chopin and listening to the Etudes, I went back to the Nocturnes, recorded years ago by Claudio Arrau. https://www.youtube.com/watch?v=uUdoxvigIl8
This music is sublime. Just read what the listeners say:
Oudtshoornify: "Am 77, and have not ever before heard the Nocturnes played like this.   Makes my heart  turn over, giddy from the beauty.   Thank you for this gift."
Gary Lotilla: "What a soulful rendition. No tricks, no bravura playing. Sheer beauty. Touches the soul. Transports you to the divine and the infinite."
Marsha Carlson: "Play music through my computer. CD's long gone. LP's of course too.;-) My daughter came over for dinner,  this recording was playing. I told her I could not listen to anyone else play Chopin. We had this playing every evening for many years in our home when she was a child. She said, "Mom, I know every note'. Good wishes to all who love good music like this. :-)"
Nicholas Bianchi: "Arrau's slow and laconic lyricism is the perfect temperament for these pieces. To truly play Chopin's Nocturnes one must understand the poetry of dusk and darkness."
teddy toto: "Arrau’s interpretation of Chopin’s Nocturnes strikes me as one of the most naturally beautiful interpretations. So direct, simple and beautiful."
MichaL H:  "Chopin touches the deepest , most private and personal feelings and emotions humankind is capable of experiencing . A poet , and a Titan of the piano ."
Georg Vrabetz: "When diving into this beautiful world, created by the ingenious compositions of chopin and the marvellous rendition by grand seigneur Claudio Arrau, all of the daily problems seem so far and meaningless."
R: "Chopin has an ocean in his soul. I have no choice but to sigh in front of his ocean."
ccmik123: "This is the most beautiful thing that i have heard."
roobear 53: "his piano is a magic loom spinning dreams of sound"
Just Jeanne: "Ahhhhhh.....Chopin.... is there anything more beautiful or transcendent?"
Posted by Maja Trochimczyk at 8:00 PM