Chopin in the Snow and Celebrating his Birthday (Vol. 12, No. 3) 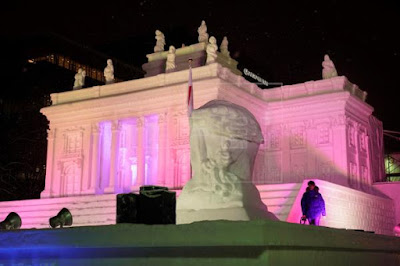 Photo from the article posted by EFE.com:
https://www.efe.com/efe/english/portada/japan-holds-sapporo-snow-festival-2020/50000260-4165183
The 2020 Sapporo Snow Festival included a replica of the Palace on the Isle, from Warsaw's Lazienki park, and, as a bonus, a snow version of the famous Chopin Monument by Waclaw Szymanowski, which was designed in 1907, unveiled in 1926, destroyed by Germans in 1940, and rebuilt by 1958 in Warsaw's nearby Ujazdowski Park. I wrote about this monument in the first installment of the Chopin Monuments series on this blog. 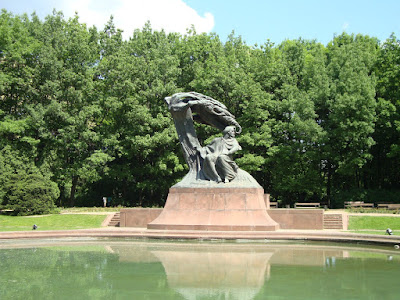 The rebuilt monument is in Ujazdowski Park, and not right by the Palace as placed in Sapporo... There is a large reflective pool right in front of the bronze sculpture of a weeping willow, with branches tangled by wind, and a composer "inspired" sitting in its shade.

After looking at the composer's photographs, I noticed that the monument shows the suffering, inspired pianist in reverse, with the lock of hair above the frown flowing dramatically to the left, from hair parted on the right.  The historical accuracy has to give in to the artistic vision... For a detailed story of the concept and genesis of the monument read the article by Waldemar Okon, "The Monument of Fryderyk Chopin by Waclaw Szymanowski: Concepts and Reality" in The Age of Chopin, edited by Halina Goldberg, 2004. 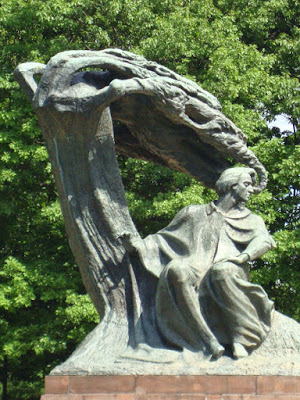 In 2020, to celebrate the 100th anniversary of diplomatic relations between Poland and Japan, Polish landmark was chosen, the classicist palace, a favorite estate of King Stanislaw August Poniatowski. The snow building, constructed by over 100 soldiers of Japanese Self-Defense Forces, is 14-meter-tall, 26-meter-broad and 20-meter-long.  The Chopin Monument placed on the side, is considerably smaller. 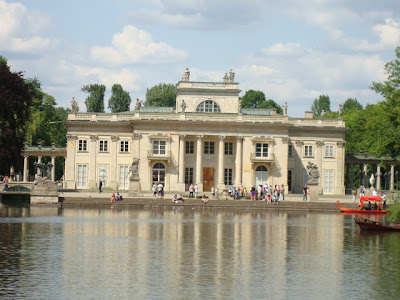 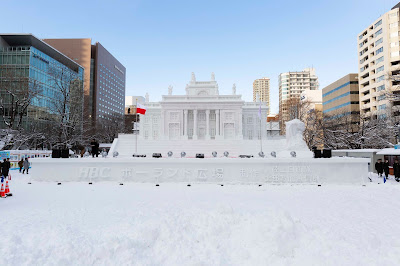 Photo of the Lazienki Palace and the Chopin Monument to the right in Sapporo from:
https://notesfrompoland.com/2020/02/05/iconic-warsaw-landmarks-recreated-from-ice-at-japanese-festival-to-mark-diplomatic-centenary/

According to the "Royal Baths" website (Lazienki Krolewskie), in Warsaw, the history of this site reached back to the 17th century: "The origins of today’s Palace on the Isle date back to the late seventeenth century. The Bathhouse was built at the behest of Prince Stanisław Herakliusz Lubomirski, one of the most important politicians, writers and philosophers of the time. The Baroque garden pavilion, designed by the Dutch architect, Tylman van Gameren, was intended as a place for resting, leisure and contemplation. The interiors of the Bathhouse were stylized on a grotto with a spring which symbolized the Hippocrene, a fountain on Mount Helicon in ancient Greece, which was the source of poetic inspiration for the Muses."

"In 1764, when looking for a place in which to build his summer residence, King Stanisław August purchased the Bathhouse together with the Ujazdowski estate. Thanks to two architects – the Italian born Domenico Merlini and Johann Christian Kammsetzer, who was born in Dresden – the King transformed the Baroque Bathhouse pavilion into the neoclassical Palace on the Isle. Modelled on Italian architectural solutions, such as the Villa Borghese, Villa Albani, Villa Medici and Villa Ludovisi, it was intended to symbolize the dream of an ideal, modern and sovereign state."

There are no mentions of the "Royal Baths" Lazienki Palace in Chopin's letters - during his time, it was still a Royal Palace, not open to the public, but rather used by the Russian rulers of Poland.  His letters have some mentions of beautiful parks with ancient huge trees. Mentions of such parks are found in his correspondence to family and friends, sent from Scotland in 1848, for instance, describing the charms of the Calder House estate, with a beautiful park. . . 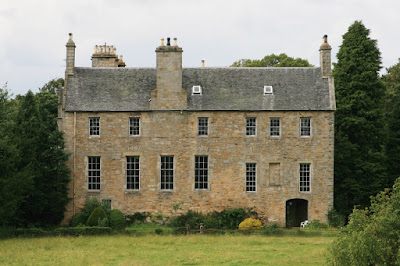 Calder House in Scotland, where Chopin visited in 1848, photo from:
http://www.stravaiging.com/history/castle/calder-house

March 1, 1810 is Chopin's birthday celebrated today as the accurate date - it was celebrated by his family during his lifetime. There is another, earlier date, celebrated on February 22, as written on Chopin's baptismal certificate. Scholars still have not come to terms as to which date is correct, but the majority is inclined to follow Chopin's family tradition of March 1. 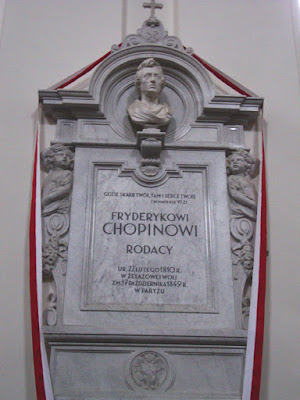 The commemorative plaque in The Holy Cross Church on Krakowskie Przedmiescie in Warsaw, where Chopin's heart is held in one of the columns, bears the date 22 February 1810, instead of March.
This "confusion" is actually a bonus for Chopin Festival organizers as they schedule events for the whole week from Feb. 22 to March 1, and bring lots of Chopin's music to the public. For instance, in Chicago, jazz vocalist Grazyna Auguscik is one of the organizers of the week-long Chopin in the City Festival, held from February 22 to March 1, with an eclectic range of concerts, not just Chopin's piano works being featured.

Posted by Maja Trochimczyk at 7:37 PM